Protect his family and friends.

Defeat Nobunaga and his armies.

Military Warrior
Kenshin Uesugi (Japanese: 上杉 謙信) is a character in the Samurai Warriors series. He is one of the members of the Uesugi clan.

Kenshin is known as the Dragon of Echigo, and is comparable to the neighbor and the "nemesis", Shingen. He first leads a campaign to defeat his opponent. After Kawanakajima collided with the wits and blades, he was even more fascinated by the true color of his rival in the battle. However, as one of the duo's diplomats, Shingen was not interested in staying and let Hōjō oppose him. In order to counterattack, Kenshin invaded Odawara Castle and handled Ujimasa in a single way. When Yukimura and Kunoichi appeared in the castle, he learned from Ujimasa that the whole incident was transferred from Shingen's parade to the capital. Kenshin only surprise them and even made himself on their own recommendation, the entire land promises to initiate a expectation campaigns.

In pursuit, they immediately rushed the army to the north, and Uesugi faced the real field of Ueda. Although Shingen made a short appearance on the court to save his men, due to Masayuki's plan, he slipped because of Kenshin's mastery. In order to stop Shingen's path from cutting into the west, Kenshin led his staff to end the Oda of the castle. He can choose to use his power to impress Keiji and win another ally for his career in the next battle. If Kenshin took too long, Shingen crossed Owari and his opponent met face to face at Anegawa. Determined to end their differences once and for all, Kenshin killed Takeda. In his over-enthusiasm, he finally saw the war-driven expression he was hoping to get from Shingen and was satisfied.

However, Kenshin tried to killed Shingen and accidentally became the new ruler of this land. After praying for his success, he solemnly toasted the war flag burned by Shingen. If he can deal with Nobunaga quickly, his efforts will make Shingen give up his march, and the competitors decide to solve all problems again in Kawanakajima. He only intended to defeat his opponent in the battle. At first, he was able to defeated the Takeda army and defended his personnel from Hanzo. As Shingen finally failed, the elderly hoped that Kenshin could seize his mind. Kenshin accepted his nemesis quality through their duel, shared a glass of wine with him, and was content to leave the land in Shingen's hands.

After Kenshin and Shingen had dealt with many enemy forces on the battlefield for several times, he eventually won the fourth coaching of Kawanakajima. At the time, the two have been unsatisfied with what they call the last resistance and wants to go back directly to the territory after finished somethings, Kenshin about to clean up the home of numerous bandits. It was believed that Shingen is insensitive in the military capital, he constantly decline Nobunaga to take away the prosperity of Shingen's life. For other grievances, Nobunaga is very abominable and used these infatuated means to retaliate against Kenshin for their rejected. 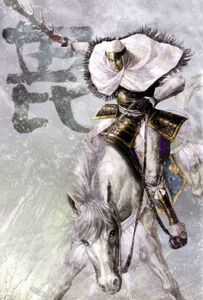 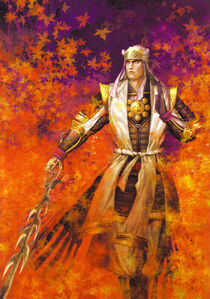 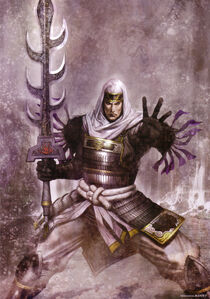 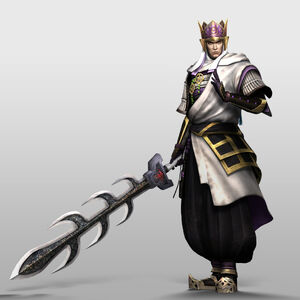 Kenshin in Samurai Warriors 4.
Add a photo to this gallery

Retrieved from "https://hero.fandom.com/wiki/Kenshin_Uesugi_(Koei)?oldid=1860806"
Community content is available under CC-BY-SA unless otherwise noted.