Kenuichio Harada is a minor antagonist turned anti-hero from 2013 film The Wolverine.

As an associate of Master Yashida, Harada was seen on the roof-top of a building during the funeral of Yashida. As Mariko was getting kidnapped, Harada assisted Yukio and Wolverine in attempt to prevent the kidnapping. He is later revealed to be a former fiancee of Mariko.

He is later seen negotiating with Viper to kidnap Mariko in order to capture Wolverine for her associate, The Silver Samurai.

Before Mariko is about to be executed by her father Shingen, Harada and the Black Clan came to her rescue and took her to a research base located in Master Yashida's birth place.

With his personal squad of ninjas called the Black Clan, he prevented Logan from reaching the abandoned research facility to rescue Mariko using bow and arrows to penetrate Logan with the poison provided by Viper leaving Logan captured.

As Logan was captured, Harada was with Mariko before being stabbed so she could then rescue Logan.

When the Silver Samurai emerged, Harada joined forces with Yukio and Logan after realizing that he was being used, which lead him to his death. 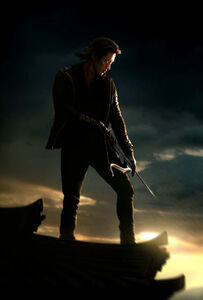 Add a photo to this gallery
Retrieved from "https://hero.fandom.com/wiki/Kenuichio_Harada?oldid=1634389"
Community content is available under CC-BY-SA unless otherwise noted.