Dr. Kenzo Tenma is the main protagonist of the Monster series.

He was voiced by Hidenobu Kiuchi in the original Japanese version of the anime and by Liam O'Brien in the English dub.

Dr. Kenzō Tenma is a Japanese neurosurgeon working at the Eisler Memorial Hospital in Düsseldorf. At the beginning of Monster, he is the Head of Neurosurgery who was favored by the department's director, Heinemann, for his prodigious surgical skills and was even offered Director Heinemann's daughter Eva for marriage.

He is then scolded afterwards by Dr. Boyer and Dr. Oppenheim for not working on the mayor, who died as a result of the doctors having to scramble to cover for Tenma at the last minute. At a banquet, Dr. Tenma begged for forgiveness from Director Heinemann who told him he was forgiven while stating comments that blacklisted Dr. Tenma, Eva rescinding her marriage, and Dr. Boyer gaining Tenma's position as Head of Neurosurgery. When he talked to the supposedly unconscious boy who he saved, he expressed his anger and wished his boss to be dead.

Some weeks later, Dr. Tenma gets word from the visiting policemen that Director Heinemann, Dr. Oppenheim, and Dr. Boyer are mysteriously killed. Because of the three deaths and some transfers of some of the doctors, the Chairman of the Board ended up giving Dr. Tenma the position of Chief of Surgery.

It is only after nine years that Dr. Tenma learns the perpetrator of Director Heinemann's murder and the recent death of Adolf Junkers is none other than the boy he saved years before, Johan Liebert. Plagued by guilt, he resolves to find Johan and end the life of this "monster" he feels responsible for creating while evading Inspector Heinrich Lunge, who suspects him of the murders committed by Johan. In his investigations, he knows a boy called Dieter, whose legal guardian secretly mistreats him and tries to practice the Knderheim 511 methods, and when Dieter's sufferings are revealed, Tenma rescues him and forms a friendship with him.

Despite his mission, Dr. Tenma is a humanitarian who genuinely cares about the lives of others. These acts of kindness make him very influential with the people he meets. Not much is known about Tenma's childhood; however, when he was growing up in Japan, he was constantly getting picked on and had a habit of wetting his pants. This earned him the nickname of "Sissy Pants Tenma". As well, Kenzo's father and brother were also doctors, though Tenma was not close to his family, and his family ties have grown weaker as he had not been back in Japan since he left to Germany. It is unknown how much time passed between Tenma becoming a certified doctor to when he started as an attending surgeon at Eisler Memorial Hospital. However, it soon became evident to his superiors that Kenzo was probably the best neurosurgeon on staff, and he would died quickly be promoted to Chief of Neurosurgery around the same time he met Eva. Tenma also has some acquaintances from Japan who occasionally visit him while on business, but it is not known how close his friendship with these people is. In his journey to kill Johan, he comes incredibly close on a number of occasions only to have Johan slip away.

This ends up leading him to the final confrontation with Johan in Ruhenheim. When Johan wants Tenma to kill him, he tries to threaten Wim when the child's drunk father Herbert ends up mistaking Johan for a monster and shoots him. After Johan had been picked up by the ambulance, Dr. Tenma was convinced by Nina and, indirectly, Lunge to save Johan and ended up treating the wound. Eventually, Dr. Tenma was cleared of all charges. He later joins Doctors Without Borders and learns from Otto Heckel where the mother of Johan and Anna is located. Tenma later visits a comatose Johan in a police hospital before leaving to visit his friends. Suddenly, he saw Johan questioning if his mother really loved him, and it was left ambiguous if Johan really did that or if it was just a hallucination. After his visit, Johan escaped from the hospital and disappeared. It was initially unknown if he escaped the country or was caught and was later executed, but canonically in Another Monster, Johan had "rebuilt" his life. It's also revealed that Johan's crimes have been exposed to the public. 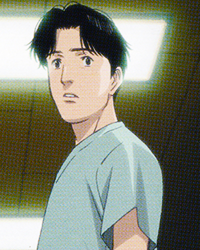 Young Kenzo Tenma, when he worked at the Eisler Memorial Hospital. 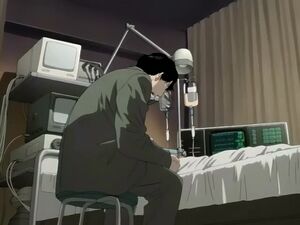 Kenzo before his breakdown.