Defeat all zombies and take back Suburbia

Kernel Corn is one of the main protagonists of the Plants vs. Zombies franchise. He is an military fighter who take parts in fighting zombies and taking back Suburbia.

He was voiced by Michael Dobson, who also voiced Citron from the same game.

In his stickerbook description, Kernel Corn was fighting overseas during the Garden Warfare 1 event.

In Garden Warfare 2, Kernel Corn appeared as a playable character on the Plants' side. His primary weapon is Cob Busters.

His L.E.A.F. agent counterpart is Agent Corn. His first quest is asking the players to head to Z-Tech factory for his secret Nuke Juice.

Next, he ordered the players to help him steal the largest bottle of Nuke Juice while flying on Butterhawk.

After that, Agent Corn asked the players to protect him as he plants a Tactical Cuke at the Zombies doorstep with Butterhawk.

When the players completed all three quests, he congratulated them and let them open another portal, or meet Dave-bot 3000.1 if the players met all the other L.E.A.F. agents

Kernel Corn returned in Plants vs. Zombies Heroes as a Corn Plant of Ka-bloom class. His rarity is Premium - Legendary, he costs 8, and his strength and health are both 6. When played, he deals four damages to each zombie.

BBQ Corn is a Rare Kernel Corn variant in Garden Warfare 2 whose rapid-fire Spicy Hot Shot ignites enemies in front of him.

With his piercing Cob Crusher, Mob Cob - the only Super Rare variant of Kernel Corn - can vanquish multiple zombies at a time.

Pops Corn is another Rare Kernel Corn variant that uses his rapid-firing two-shot-burst Corn Cracker that helps him with his precision.

Party Corn is a Kernel Corn Legendary variant who fight the zombies with his Party Busters, which is the same as the Kernel Corn's primary. Additionally, he has a Party Time meter, where he must vanquish enemies to fill that bar, where he gains temporary speed and damage boost.

Kernel Corn appeared in Garden Warfare comics who take parts in fighting zombies to take back Neighborville, alongside Citron and Rose. 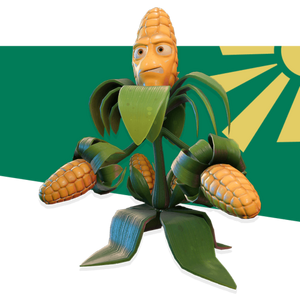