Knows how to use a Kero Ball

To collect Gundam models and manga

To take over Earth (failed)

Keroro is the titular character and protagonist in the manga and anime Sgt. Frog (also known as Keroro Gunso in its native Japan).

Sergeant Keroro is the leader of the Keroro Platoon, evidenced by the leadership star he wears on his belly.

He is voiced by Todd Haberkorn in the Funimation dub who also voiced Death the Kid, Kimihiro Watanuki, Ling Yao, Firo Prochainezo and Shikadai Nara.

Keroro is a frog-like alien known specifically as a Keronian. He has a green and white body. He wears yellow headgear with a small red star in the middle. There is a large yellow star on his tummy. When members of the Keroro Platoon happen to be caught in an explosion of some kind, they are seen with an afro. Keroro's black afro is most commonly seen.

Keroro is carefree, happy-go-lucky, naïve, unintelligent, manipulative, selfish, sensitive, proud, humorous, emotional, negligent, greedy, ignorant, lazy, stubborn, mischievous and unlucky, with a short attention span for anything not related to his Gundam models, though he occasionally displays bouts of unselfishness and bravery. Unlike the ideal platoon sergeant, Keroro often shows a great amount of cowardice, especially when he is around Natsumi, Zurara and Gururu. He often misspends the invasion budget on models and he always leaves all the paperwork for the bosses back in Keron at the last possible moment, often ending up punished for it. He is childhood friends with platoon members Giroro and Dororo, and the one responsible for most of the later traumas. He's unaware of Tamama's crush on him.

Keroro used to be a good officer, but since his arrival to Earth, he has lost most of his interest in the invasion, preferring to spend his time making Gunplas, watching anime (especially the Space Captain Geroro series, a parody of Space Battleship Yamato), or reading manga, when he is not doing the house chores of the Hinata household. Occasionally, specially when there is a lot of moisture in the air (similar to the levels back in Keron), he reverts to his previous self, but that usually ends with a Nyororo sucking off all of Keroro's moisture.

His invasion plans often hide personal goals, like getting back at Natsumi, and even when they do not, they are often harebrained ideas without a chance of success. His plans for raising money usually follow the same pattern and often involve Momoka hiring them for some crazy plan of her own. The few plans that do have a chance of success usually fail due to setbacks, Fuyuki's friendship appeals or because another character points out that if Earth is destroyed, it would mean no more Gundam models. 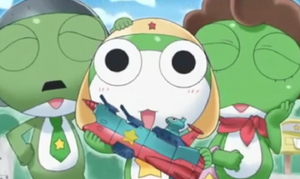 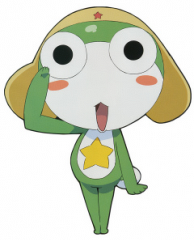 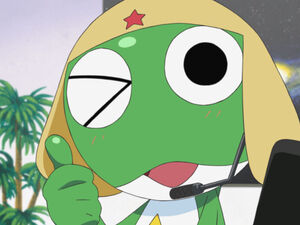 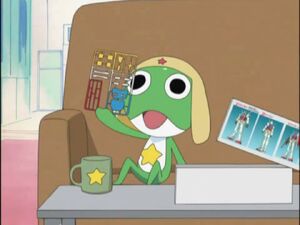 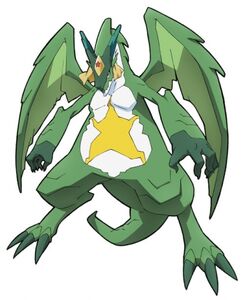 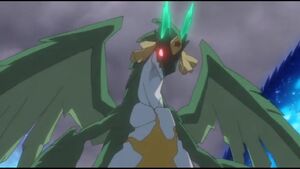 Add a photo to this gallery
Retrieved from "https://hero.fandom.com/wiki/Keroro?oldid=2246588"
Community content is available under CC-BY-SA unless otherwise noted.