Kesuke Miyagi, otherwise known as Nariyoshi Miyagi, Miyagi Yakuga, and Mr. Miyagi, is the deuteragonist of The Karate Kid trilogy.

He was played by the late Pat Morita.

Kesuke Miyagi begins the first film when our hero, Daniel LaRusso, met him in the house he and his mother moved in. When Daniel argues with his mother about his new home, Mr. Miyagi feels sorry for the boy.

He later comes to his rescue when he is captured and attacked by Johnny Lawrence, leader of the Cobra Kai gang. Over the course of the film, Mr. Miyagi trains Daniel in the ways of karate, giving him the courage to face his fears and defeat Johnny in a karate tournament.

In the second film, Mr. Miyagi takes Daniel to meet his family, where they face many challenges they didn't expect.

in The Next Karate Kid Julice Pierce 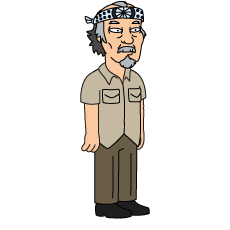 Family Guy Version
Add a photo to this gallery
Retrieved from "https://hero.fandom.com/wiki/Kesuke_Miyagi?oldid=1577460"
Community content is available under CC-BY-SA unless otherwise noted.