Combat proficiency
Can transform into a werewolf at night

Looking after Karl.
Training to fight.

Seek out a way to resurrect Karl.

Get revenge on Gauser for making Karl attack him (abandoned once he found out the truth about Karl).
Defeat the Masked Mage and his followers as well as the other two evil factions the heroes oppose.
Save the world from the Benevodons.
Save the world from Anise the Witch (remake).

Kevin, titled Son of the King of the Ferolian Beastmen, is one of the six playable protagonists of Trials of Mana, which previously only released in Japan as Seiken Densetsu 3 for the Super NES. He is a beastman grappler who hails from the Beast Kingdom known as Ferolia as its prince. He is the only son of Gauser, the king of the Ferolian beastmen, and a human woman who left him when he was a newborn, and his best friend is a wolf puppy named Karl.

Kevin's mother left him some time ago when he was only a newborn, leaving him in the care of his father Gauser the Beast King.

He was trained in the art of fighting from the childhood, leaving little time for friendships. Not having been able to fit in with humans nor beastmen, he often spends his time strolling around Duskmoon Forest with his best friend Karl, a wolf puppy whom he found with a slain mother wolf some time ago and thus long since vowed to protect him.

His species, the beastmen, have had a long history of being persecuted by mankind, which considers them to be nothing more than wild animals. Only one managed to stand up to the oppression: his name was Gauser, and he became king and built the kingdom of Ferolia. Sick of the poor treatment given to the beastmen by humanity, he has long harbored a desire for revenge against mankind, which is made attainable when the mysterious magical Grim Reaper-like jester known as Goremand unexpectedly pays him a visit and offers to lend his dark spells to his service. Intrigued, the Beast King asks Goremand to demonstrate his abilities by corrupting the will of Karl, which causes him to attack his own friend. Kevin tries to defend himself, but fares poorly until his beastman power awakens, transforming him into a werewolf and causing him to deliver the "killing blow" to his own friend. Heartbroken, he makes a grave for Karl and, seeing no further reason to stay in Duskmoon Forest, returns to Ferolia.

However, as soon as he returns, he sees that nothing is the same, as he learns of his father's plans to overthrow humanity starting with the invasion of the Holy City of Wendel. He soon overhears Gauser congratulating Goremand on the results of his spell, and this is where he learns of the culprit responsible for making him "kill" his own best friend. Enraged, Kevin immediately attacks Gauser and Goremand, but is effortlessly bested and knocked out of the castle by his father. After coming to, he finds Goremand again, demanding to know what he did to Karl. The panicking jester makes an offer to Kevin and suggests that he seek out the Priest of Light in Wendel for a way to bring Karl back to life and urges him to hurry over there before the Ferolian beastmen get there before taking his leave. Acting on Goremand's advice, Kevin decides to leave Ferolia behind and search for a way to revive Karl as well as what happened to his human mother.

Kevin shares many story elements with fellow playable hero Charlotte, who hails from Wendel, which Ferolia attempts to invade, and who also loses a loved one to one of Goremand's spells. If either hero is chosen as the main protagonist, the main villains will be Goremand and his master, the Masked Mage, and the final dungeon will be the Mirage Palace.

In Kevin's ending, it is revealed that Karl's death was actually an illusion created by Goremand, and that Karl is actually alive and well; Over the course of Kevin's adventures, Gauser dug him back up from his grave and wanted to prove this fact to his son, as well as how good a parent he really was to him in the end. He also reveals to him that his mother passed away due to sickness. As soon as Kevin learns this fact from his father, he happily reunites with Karl and introduces him to his chosen party members as new friends of his own in his ending while also telling him to find more friends as well.

Kevin and Charlotte appears in Super Smash Bros. Ultimate as ace support spirit first appearing in the "The Sprits of Mana" event, their abilities heals the user after defeating a fighter. Their spirit battle is on the Hyrule Castle stage against Incineroar and tiny Robin who have increased attack power at high damange and heals significantly when both are on high damange.

Kevin is rather inarticulate, meaning that he omits certain words from his sentences whenever he isn't speaking informally. In the fan translation, he is shown to speak broken English. As a result of being trained to fight ever since he was just an infant, his social skills have been affected, making him unused to conversing with others and thus making him hard to understand at times. His kind and gentle side manifested once he befriended Karl upon finding him, melting the ice that surrounded his heart. Kevin became really angry with his father Gauser upon finding out that he corrupted Karl's will to attack him to force him to awaken as a beastman, and since then had never forgiven him and burned with hatred for him until the latter revealed to him that he didn't kill Karl at all and that the illusion cast by Goremand made him think otherwise.

Kevin is capable of transforming into a werewolf at night thanks to his heritage as a beastman, which further increases his already high attack power. This makes him the physically strongest character out of the six protagonists of Trials of Mana. He can gain quite a few magical abilities to supplement his magical prowess upon changing classes, and, due to his fighting nature, his martial arts based class also allows him to rack up even more hits by number, which grants him greater DPS and lets him quickly rack up his tech meter.

His Light classes focus on the greater use of spells and techniques to augment him, granting him both healing abilities and the Pressure Point Spell that enables him to fight with the same strength as his werewolf form even during the day, with his final classes giving him a Wood-elemental support spell as well. Meanwhile, his Dark classes have more focus on exploiting his werewolf form. While they demand reliance on equipment and raw stats operating at night due to not having the luxury of Pressure Point, the werewolf forms of his Dark classes grant Kevin even greater stat boosts than his Light classes. Each of his final Dark Classes is only capable of learning one Moon-elemental support spell. 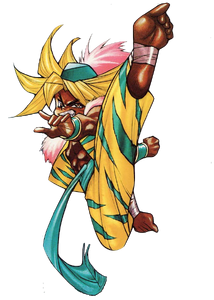 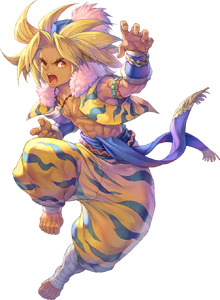 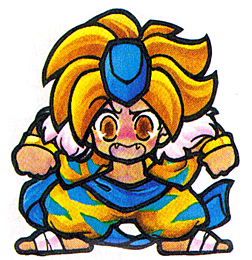 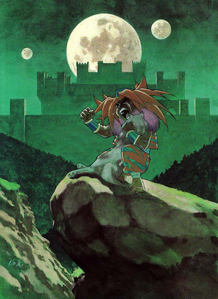 Promo artwork featuring Kevin grieving over the "death" of Karl. 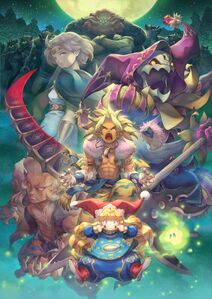 Promo artwork for the release of the Trials of Mana remake featuring Kevin, the other heroes, Flammie, and Vuscav.

Promo artwork for the release of the Trials of Mana remake featuring Kevin, the other heroes, and Faerie.

Promo artwork for the Trials of Mana Original Soundtrack featuring Kevin and the other heroes playing musical instruments.

Promo artwork for Collection of Mana featuring Kevin and the other heroes and the Mana Spirits from the first three Mana games. 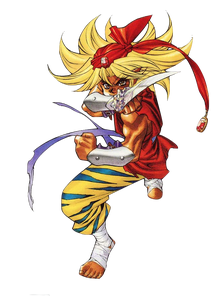 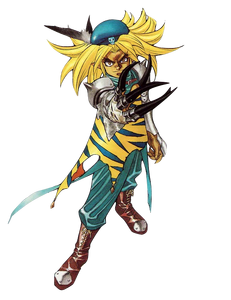 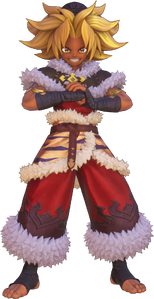 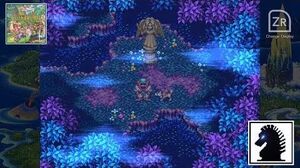 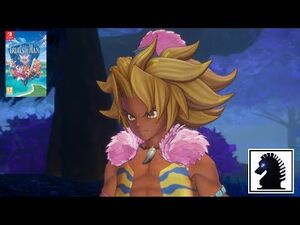