Kevin Swanson is the son of Joe and Bonnie Swanson, and older brother of Susie Swanson. He was voiced by Jon Cryer in "A Hero Sits Next Door" and Seth MacFarlane in all other appearances until the 10th season when he is voiced by Scott Grimes.

During his early appearances on the show, he was thought to be around 17, though his age is never revealed; He's assumed to be 18 after it was announced that he was killed in Iraq in "Stew-Roids". Though Joe was raising Kevin to be his vision of an ideal son, Kevin rebelled with his taste in music. Joe states in "And the Wiener is..." that the first time Kevin beat him at a competition he gave him a "small congratulatory punch" followed by a few more and "then everything got a little hazy and Kevin had to go and live with a foster family for a while." Kevin was also in "Fifteen Minutes of Shame" where it is seen that he works at the Quahog Mini-Mart where Peter sees him and Meg is embarrassed because he might not like her now because he saw Peter naked. He is also seen in "Ready, Willing, and Disabled" where he can be seen do a charity car wash with Brian. Kevin has appeared in other episodes but in pictures like in "Believe It or Not, Joe's Walking on Air" where there's picture of him as a little boy, or in "Love Thy Trophy" where Peter is trying to find the trophy. Meg had a crush on Kevin, he seemed to be able to stand being around her unlike most characters on the show. He's also mentioned in "Stuck Together, Torn Apart" where Lois reads Meg's diary and talks about Kevin. He appears in the episode "PTV" during The FCC Song's archive footage of Family Guy nude scenes.

When Kevin was first introduced, Chris makes the off-hand comment that Kevin was clearly gay to Meg, who was staring avidly at him from the kitchen window. Whether or not Chris's comment was done simply to aggravate Meg who told him to shut up or a genuinely true observation, it was never revealed.

They have dated previously although every time they get time together, something usually happens to interrupt them, he did not have a speaking appearance after season three and seemed to have been mainly removed from the show aside from cameos in "The Perfect Castaway", at his father's supposed funeral, and "Peter's Two Dads", at Meg's 17th birthday party. Kevin usually wore a red or gray top.

In "Stew-Roids" Peter asked what happened to Kevin, and Joe coldly replied he died in Iraq.

He returns in "Thanksgiving" after having been reported being Missing In Action. After receiving a hero's welcome, it turns out that he faked his death and went AWOL after deciding he couldn't stand what the United States was doing to the Iraqi population. His admittance horrifies everyone present and Joe starts to arrest Kevin until he is reminded of a time he let a thief go that stole to feed his sick family.

Since then it appears Kevin has become moody, suicidal, and aloof. In "Tom Tucker: The Man and His Dream" Bonnie states he drank two bottles of dish soap. He also suffers from PTSD and night terrors.

Chris mentions in "Internal Affairs" that Kevin often hangs out at the bus stop but never boards a bus. Also, the Griffin family goes over to the Swansons' house to celebrate Kevin's first birthday since his return from Iraq. Kevin is visibly angry that none of his friends were invited, until his parents tersely remind him that all his friends were killed in action.

When the guys are in Joe's room dedicated to Bobby Briggs in "Joe's Revenge", Quagmire mentions that Kevin is 25. A cutaway of Kevin sharing a room with Susie shows him telling about digging bullets out of an Iraqi family's skulls to hide the evidence of their shooting.

Joe calls a phone sex line to arrange a three-way with himself and Kevin in "Call Girl", unaware that Lois is on the other end. When she admits she doesn't care about guys in wheelchairs, Joe regretfully tells her that his son is in the wheelchair. 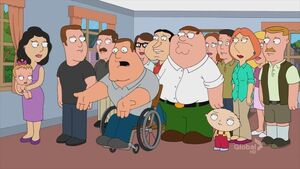 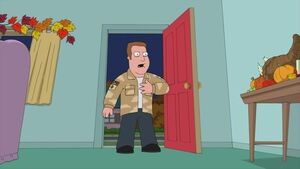