Member of the Four-and-Sixty (formerly)

The Plagues of Egypt

Writing in his Journal
Speaking with his brother

Khalid is a character in the M.M.O., The Secret World. Khalid is prophetic hermit living just outside al-Merayah, Egypt. Khalid functions as one of many contacts in the game and briefly as a guide to point the Players in the right direction to defeat the evil Atenists. Upon making contact with Khalid though, the old sage takes on a new depth and establishes significant background into the state of the secret world. He is an old artifact of an on-going war which has apparently been fought many times before.

Khalid is encountered during the Black Sun, Red Sand arc - the story-line for Egypt. He is first encountered after the Player meets Nassir. Nassir, a freedom fighter giving tactical support against the deranged Cult of the Aten, will tell the Player that the cult has been on the rise, that they enslave men and woman to an ancient evil will and turn them into the living dead, capable of unspeakable evil. Leaving the area will show Nassir's warning coming to pass as a barrage of the cultists come charging towards Nassir's outpost, swords and guns drawn in fanatic thirsts for blood. The barrage is halted by Khalid when he conjures a sand storm and strikes down the remaining Atenists. Khalid then prays for the souls of those he has just helped to stop, insisting they can not control their actions and asking they find peace in the afterlife. Khalid points the player to the north. He will tell the Player that the cult found something in the mountains, an ancient resting place that has been disturbed. Khalid tells the Player that to go into the mountains, will show them what it is the Cult of the Aten is gathering for and why their numbers have exploded.

Once the Player goes to the north they will see a gateway built into what should be solid mountains but actually goes into a valley not on any maps. The valley is called The City of The Sun God and in it, the Player will find a man named Phamose and his children. Phamose's children haunt the statues of the ancient Egyptian gods, and embody them each as avatars who represent their patron's as best they can. Phamose is perpetually reincarnated and returns to the valley to see his children during each life. Phamose says that Khalid and he were the only ones who knew of the valley, but that the Cult of Aten followed him on his way in to visit his children and he has inadvertently brought the worshipers of an ancient evil to that evil's resting place. Phamose says he trusts Khalid's judgment and if he sent someone, he knows that it was for a good reason. Khalid's word has Phamose accept the Player as a trust-worthy ally.

Khalid was a member of the Four-And-Sixty, a pre-cabal that existed before the three factions of the game, commonly called The Big Three - the Templars, Illuminati and The Dragon. The Four-And-Sixty were composed of many figures now thought of as Biblical, including King Solomon. Khalid's ties with the Four-And-Sixty were severed long ago, because they said he cared too much for mortals, something they saw as an unacceptable weakness. Khalid continues to maintain the values of his cabal, though no longer a part of it, and the cabal it-self no longer existing. Khalid has made an effort to get better at not caring too much, and rather than tell people what to do, or how to fight evil, he speaks to them in riddles, though as his brother points out, he is sometimes less-than subtle with his clues. The Four-And-Sixty split apart and became the three factions, though some may have existed before it and just re-formed after. The Templars view their ties to the Four-And-Sixty, as ties to a time of Biblical purpose. The Illuminati view ties to the Four-And-Sixty as parts of history that they, themselves have lost and thus must be preserved for posterity, The Dragon view the Four-And-Sixty as a great riddle that must be solved eventually, and so all take Khalid's words as ones worthy of being followed.

After tending to the mercenaries of the Brotherhood of Phoenician Sailors in al-Merayah the Player may find an eye-of-Ra talisman just in front of where a Phoenician shipment needed to be recovered. If the player touches the eye they will engage in a new mission, Tainted Dreams. The Eye sends the player into the astral-plane where the spirit world over-laps with the subconscious mind. A wraith called the Scourge of the Red Nights has been tormenting Khalid. Khalid has visions of the future and the wraith is a manifestation of the doom that waits just over the horizon. Defeating the wraith as it moves off to Khalid will allow Khalid to sleep in peace. Once the wraith is defeated the Player can re-manifest in the physical world, which will be at Khalid's oasis retreat, where the Scourge of the Red Nights had been going off to.

Khalid will be looking out on an ancient Roman outpost in Egypt, Sol Glorificus. The Romans within the area were converted back in 329 A.D.. Like all members of the Cult and it's many permutations, the souls of the cultist are tormented even after death, perpetually tormented by Aten and his kin. Khalid wishes for their souls to be free and tasks the Player with going into the ruins and freeing them. Khalid will be rather insistent that it be done and directly tells the Player they must do it, pestering them off at the implication that he is just asking. The Romans are in a state of undeath, their bodies are dead but still animate, their souls yearn to be free but they maintain the same slavishly devoted state they were in when alive and so they speak like an organize and fanatical squadron even while obviously is constant pain, as indicated by their groans and cries. Their commander Legatus Aulus is the anchor keeping the legion from moving on - himself so far gone he is little more than a mindless mummy boiling over with Filth. Destroying Legatus Aulus instantly collapses the rest of the Romans as the Filth loses it's grip on Legatus Aulus's troops.

The true nature of Khalid comes into play in his final mission The Unburnt Bush. Khalid is happy the Romans are at peace and is conversing with a burning bush. Khalid says the bush is his brother speaking to him from the other-side. Khalid states that the path of the two diverged, his brother escaped into death while death escapes him. Khalid says that he was cast out of the Four-And-Sixty for caring too highly for mortals as if it was some in-excusable weakness. He then coyly states that while he could tell the Player what to do next to find out more he has learned his lesson and will not. Instead he casually drops his staff with his back turned and states that "I may mislay my staff where someone might retrieve it." He also states to be on the look-out for brush fires as they would need to be stamped out, and that in his experience staffs are good for stamping things out, at which point his brother flares up from the bush. Khalid notes his brother thinks his last comment was too blunt and Khalid states he can never get things right. Picking up the staff though will cause a trail of brush-fires to appear. Following the trail will lead the Player to six alters, each requiring the staff to be read.

The alters use Arabic lettering and the staff uses Hebrew, and the alters open up to reveal detailed info of Khalid's past once the proper combination of letters on the staff is hit. The first alter speaks of "Blood" so the staff must be used to spell out "Blood" in Hebrew, doing so will cause the water around the alter to turn to blood as it saps the life from Atenists closing in. All the alters have similar words, each referring to one of the Ten Plagues of Egypt. Each message paints a picture of Khalid's time. Pharaoh Akhenaten enslaved people to the will of Aten, but encountered the Staff of Exodus and it's wielder. the messenger used the staff to free the people of Egypt but Akhenaten rather than fearing the staff wished for one like it. Akhenaten was already semi-touched by Aten but upon seeing the power the staff had his appetite for power was wet and he implored Aten for his own dark-version of the staff. Aten had a staff forged from Filth for Akhenaten, speaking to the Aten directly and then wielding a staff made from the run-off of his power completely corrupted Akhenaten, changing him from some-what eccentric to utterly insane. The Cult of the Aten was his brain-child and they continued to seek their founder's tomb long after he was dead in order to unleash him on the world as the avatar of Aten, backed by a duplicate of Khalid's Staff of Exodus.

Following-up on background info with Phamose will reveal that he, and his children have been honing the power of the Egyptian gods directly on-top of Akhenaten's pyramid to keep the Filth infused tyrant from waking from his death. Khalid had been keeping watch outside and diverting the cultists until a massive earthquake occurred. The quake cracked open the side of the mountain to reveal Phamose's entrance, creating a potential for the second-coming of Akhenaten.

Khalid is Arabic for "Friend", suggesting it is not his real name but an alias. With the staff confirmed as the Staff of Exodus, Khalid is implied to be a figure from Exodus. The presence of the burning bush as his brother narrows the possibilities of Khalid being either the Biblical figure of Moses, or his brother Aaron. Khalid makes Biblical quotes, yet he claims he has not bothered to read the Bible, Torah or Qur'an. The implication is either Khalid is an immortal Moses trying to keep "Pharaoh" (Akhenaten) from enslaving Egypt again or, a beleaguered Aaron, trying to do his brother proud by cleaning up the mess left over from Exodus. 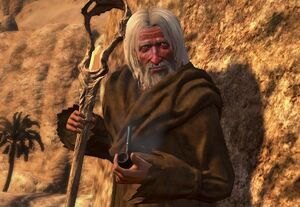 Khalid asks for mercy on the souls of the Atenists

Khalid calling down lightning
Add a photo to this gallery
Retrieved from "https://hero.fandom.com/wiki/Khalid?oldid=1860807"
Community content is available under CC-BY-SA unless otherwise noted.