Restore the Saurian species and world
To crush, kill, punish, torture and take revenge against Shao Kahn
To have Shao Kahn beg for mercy, cowar, get a taste of his own medicine and a fate worse than death

Reptile (on and off)
Raiden

Khameleon is a character from the Mortal Kombat video game series.

She has been described (in biographies and ending screens in MK Trilogy) as the last female of the Saurians (Reptile's race, also known as the Raptors), who were originally from Earthrealm but were either killed or driven out following a great war. Raiden alludes to this in the introductions to MK4 and MK Gold, though not mentioning Khameleon by name. They find a new home in the realm of Zaterra, but are soon discovered by Shao Kahn. After defeating them in Mortal Kombat, Kahn drives the Raptors to near-extinction and merges the realm with Outworld. Khameleon informs Reptile that Kahn is responsible for their race's extinction, but Reptile falls under Kahn's influence once again and turns against Khameleon. While trying to get Reptile to see the truth and turn against Shao Kahn she is the alone one who knows the real history and truth about the Saurian race and realm something that not even Reptile himself knows.

Having failed in her attempts to kill Kahn, she wanders the realms while contemplating revenge against him. While wandering the realms Khameleon spent her life hiding, searching, watching, listening and waiting. During the events of MK: Armageddon (Khameleon became selectable in the Nintendo Wii version of MK: Armageddon), she learns of the battle that would occur in Edenia and the gift of ultimate power that would be granted to the victor. Khameleon seeks to attain this power for herself, to keep it away from Kahn while exacting revenge on him for his actions against her race. Khameleon makes a sort-of cameo appearance in the 2011 reboot a female grey ninja appears in the story mode in Khameleon's MKT outfit.

Khameleon makes a few short appearances only in the story mode part of the game. She is only seen standing in the backgrounds during the tournament and she appears as her original form that she had in her first Mortal Kombat game using power camouflaging herself as a human. Khameleon is not appear of the great battle for Earthrealm she is only in the tournament when the heroes have to face Shao Kahn later she doesn't take part in this event.

Even though she only appears in Mortal Kombat X Mobile and is not in Mortal Kombat X Reptile and a few other characters mention him as being the last Zaterran. While others talk about Reptile being the last of his kind the wise warrior Bo' Rai Cho tells the male Saurian/Zarerran that he is not the last one there is another one but Reptile and the other characters do not know this.

Unlike most of the other Mortal Kombat characters and female ninjas not only is Khameleon's story hidden in mystery but her personality as well. What little there is giving about Khameleon's personality is that unlike Reptile she won't side with or work for Shao Kahn who destroy the Saurian realm and race. Aside from never helping Shao Kahn it is mentioned Khameleon wants revenge to kill Shao Kahn for what he has done but she doesn't only want him dead she also wants him punished and to suffer as well.

In Khameleon's bio intros and and her endings they mention about how Khameleon keeps trying to get Reptile to change sides and join her against Shao Kahn. Khameleon has wraith towards Shao Kahn only and none to towards any of the other fighters she faces off against wanting the emperor to pay not just for his crime on Zaterra/Sauria but what he has done to other worlds as well. Khameleon wants Shao Kahn to feel pain and beg for mercy when she finally defeats him. Aside from wanting him dead in Khameleon's Armageddon ending she turns Shao Kahn into a Raptor/Saurian showing that she wants the emperor to have fates worse than death.

Aside from turning Shao Kahn into a Saurian in her Armageddon ending Khameleon forces Shao Kahn to be submissive to her. Showing that not only does she want him to suffer, feel pain, revenge against him and give him a fate worse then death. But making him submissive to her Khameleon shows she wants to break him and have control as well as power over the person who caused all her pain and suffering.

While Reptile and Khameleon are the last survivors of their kind it is said that Khameleon is the only one who knows the real truth about their sepiecs, history and realm unlike Reptile. In bio intro for Armageddon Khameleon mentions the reason why she has survived so long is that she has been hiding, training, watching, listening, waiting and observing without others knowing that she is there. While wanting to get even with Shao Kahn Khameleon mentions by watching and fighting the emperor a few times she has learned and seen that he is to powerful and knows that she has to kill him another way instead in a stright yo head to head fight.

In her own words Khameleon says that Shao Kahn lives for combat and each fight only helped him get stronger, better and improved. While reaming in hiding, wanting revenge and secretly watching everyone without them noticing. Khameleon talks about how she has wondered around many of the realms aimlessly never staying still or in one place. Khameleon mentions that she keeps herself camouflaged or disguised to keep her presence from others. She is also good at gathering information as she mentions that she heard about the power of Blaze through the conversation from the heroes without them noticing.

It is mentioned that Khameleon is disappointed when Reptile goes crawling back to Shao Kahn's side to serve him again. Khameleon doesn't like how weak willed Reptile is and wants to help him overcome this weakness in him she doesn't like that Shao Kahn uses him a disposable, replaceable, minion and pawn. Although she doesn't like Reptile and others being used as pawns by the emperor Khameleon has no problems with giving Shao Kahn's followers the same punishment and fate she wishes upon the emperor regardless if they are willing or unwilling followers.

Aside from all that most of her personality as well as her skills are a mystery she keeps hidden just like the male Chameleon. 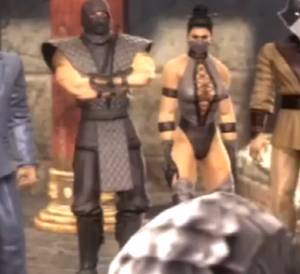 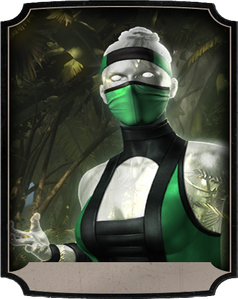 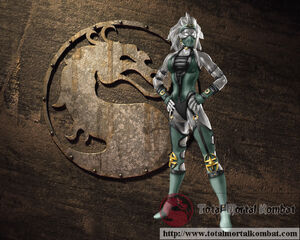