Help Mulan and her friends.

Continues his life on the farm after Mulan and Shang are married.

Animal Determinator
Khan the Horse is a character that has appeared in the Disney movie Mulan, its sequel and its 2020 live action remake. He lives with the Fa Family and serves as Mulan's steed.

He was voiced by Frank Welker.

Later, he was seen, taking Mulan to her mother and grandmother to get her ready to see the matchmaker. Later when Mulan shows up in her male guise to take him to the army with her, he initially shows fear, not recognizing her at all; however Mulan is able to quickly calm him down and he realizes who it is. Mulan then rides him off to the war.

The next day he and Mulan are shown to be in the forest next to the training grounds. Khan's sense of humor and human-like intelligence are shown for the first time. Mulan asks him if her voice and personality impression is okay; his only response is falling to the ground and laughing at how ridiculous it is. Khan's haughtiness is then seen, when he first see's Mushu he tramples him to the ground, probably taking him for a rodent instead of a miniature dragon. He also gets offended by Mushu when he says "If I was my actual size, your cow here would die of fright." Khan snaps at him, prompting Mushu to say "Down, Bessie!" (Bessie being a name cows are typically bestowed with).

Mulan even during her military training seems to take Khan most places she goes even when she goes to bathe; like her, he is disgusted by the sight of the naked soldiers, shuddering in discomfort when they run past. This indicates they are probably very close since Mulan doesn't like to be parted from him for too long.

In a later scene it is again put on diplay Khan's dislike for Mushu. After Mulan's training is over Mushu tries to get Mulan into the war to become a war hero. When he and Cri-Kee ask him for a ride he simply knocks Mushu off his back and proceeds to ignore him. (So Mushu and Cri-Kee resolve to using a random Panda instead) Khan also shows annoyance with Mushu when he accidentally sets off one of the Army's cannons causing their position given away to the Huns igniting a battle.

During the mountain scene Khan's physical strength and loyalty is shown. Khan breaks away from a man trying to soothe him in order to catch up with Mulan. After doing so he is able to help Mulan save Shang from suffocating in the snow. Khan must be able to withstand pressure many times his own weight to be able to ride and coordinate through the massive amount of snow causing the avalanche while carrying Mulan, Shang, Mushu and Cri-Kee at the same time. He does get in trouble by almost falling off a cliff but Yao, Ling and Chien Po and several other army men pull them to safety.(Though of course Chien Po did most of the work) When Mulan is deserted by the army (He tries to stop Shang from execute Mulan and was hold back by one of his soldiers ordered by Chi Fu) after her identity is discovered when Shan Yu injures her during the battle he takes care of Mulan, keeps her warm and shows sorrow for her. He also becomes offended again when Mushu calls him a (literal) sheep.

After Mulan kills Shan Yu, his intelligence is put on display once more as he bows to Mulan along with the rest of the citizens of China. He is last seen as Mulan rides him home to see her family.

Khan appears in the film, once again serving as Mulan's main form of transportation on her mission to Quigong.

Though incapable of human speech, Khan has an expressive personality, and usually communicates through snorts, whinnies, and body language. He shows human levels of intelligence, falling down and laughing at Mulan's failed attempt to act like a man. Despite his lack of actual speech, it appears that Mushu can understand him and will respond. Khan has a specific dislike of the dragon, likely stemming from various insults that Mushu directed at him during their meeting.

Khan is shown to be very loyal and courageous, as he chooses to pursue Mulan during an avalanche. He sometimes appears to silently snark at events, particularly when Mulan notices a number of naked soldiers going to bathe. 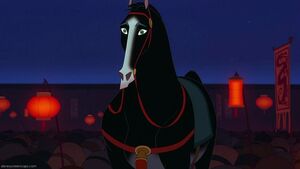 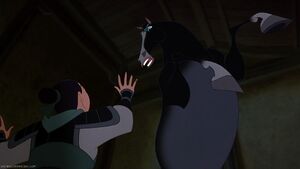 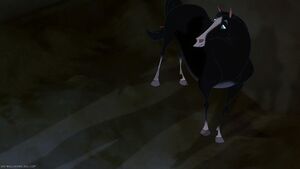 Khan in his stable 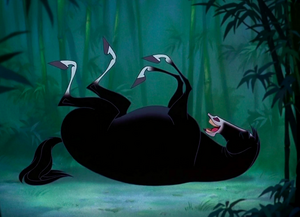 Khan as he rescues Mulan from an avalanche 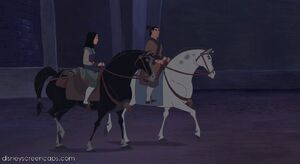 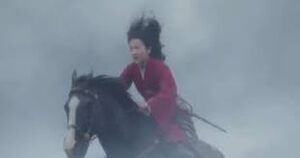 Khan in the 2020 remake
Add a photo to this gallery

Retrieved from "https://hero.fandom.com/wiki/Khan_the_Horse?oldid=1732495"
Community content is available under CC-BY-SA unless otherwise noted.