Ki is the tritagonist of Disney's 2011 motion-capture film Mars Needs Moms. She is a rebellious Martian girl. Milo meets her while hiding from the guards. She is also the love interest of Gribble. She was portrayed by Elizabeth Harnois.

She was inspired by Earth Culture and later learned how her race used to be until the Supervisor took over. She is also the love interest of Gribble.

Ki does not appear in the original book.

Ki (Elisabeth Harnois) is a strong-willed young Martian who learned to speak English by watching a ’70s sitcom. She spends her time painting elaborate graffiti on the walls of Mars. But she does so in secret. She’s forced to hide her artistic side on a planet that is devoid of color and emotion. The Martians are strictly forbidden from expressing any individuality, but Ki thinks for herself—particularly when she decides to help Milo. Talented, sneaky AND tough—Ki just may be the coolest renegade in Martian history.

Ki is a bright, sprited and headstrong martian with a strong passion for adventure and exploration. Her tendency to paint behind her own species' enemy lines shows how much she cares for her art. 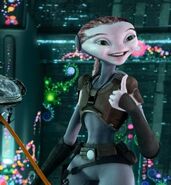 Retrieved from "https://hero.fandom.com/wiki/Ki?oldid=2108989"
Community content is available under CC-BY-SA unless otherwise noted.