To stop Freddy and Jason (failed).

Kia Waterson was an local teenager and friends with Lori Campbell and Gibb Smith. She was also the final victim of Jason Voorhees to be killed before the rebooted continuity.

She was portrayed by Kelly Rowland.

Kia Waterson was a high school student and a resident of Springwood, Ohio. She was close friends with Lori Campbell. Kia always tried to hook Lori up with some boy, mostly to divert her from constantly pining for Lori's lost love, Will Rollins.

At a slumber party at Lori's house, Kia reluctantly participated in the verbal game of "Marry, F**k, Kill". When her friend, Gibb Smith posited the question as to which of the Three Stooges she would marry, f**k, or kill, Kia responded by saying that she would kill Moe, f**k Curly and marry Larry.

Then, Gibb's boyfriend, Trey Cooper and his friend, Blake Mueller came over to the house. Kia kept trying to get Lori to hook up with Blake who failed to impress Lori with his Feng shui pick-up lines.

Shortly thereafter, Trey and Gibb went upstairs to have sex. During their escapade, masked serial killer Jason Voorhees cut off the power to the house and entered the premises.

Kia and Lori were both startled when the power cut out. They soon discovered that Trey had been brutally murdered in the bedroom and they all ran out of the house screaming.

The next day at school, Kia discouraged a nerd classmate named Charlie Linderman from trying to make a move on Lori.

Kia was known to be particularly cruel to this boy and told Charlie to put his hormones back in the box and that Lori didn't have time for "Date-a-Dork".

Lori's ex-boyfriend, Will Rollins made a surprising return to Lori's life. Coupled with the recent stress, as well as the revelation that she was being haunted by a nightmarish figure from her dreams, Lori fainted and was taken to the hospital.

Kia went to the hospital and waited for Lori to be released. While there, she paged through a magazine about Rhinoplasty as she had been giving serious consideration towards getting a nose job.

Kia dozed off, allowing dream demon Freddy Krueger access to her mind. In the dream, an image from the magagzine morphed into Freddy Krueger.

His clawed hand extended from the pages, snaring Kia's nostrils. He tore through, greatly mutilating her while quipping, "Got your nose!" Then, Kia instantly awakened and threw the magazine on the floor.

The following night, Kia, Lori, Gibb and several others attended a rave in a cornfield. They felt that safety in numbers would help them against any potential threats.

During the party, Kia once again discouraged Charlie Linderman from trying to make a move on Lori. Charlie had enough of Kia's attidue and verbally countered her, asking how her head isn't weighed down from all of her excessive makeup.

Though she didn't admit it, some part of Kia seemed to appreciate the fact that Charlie stood up to her. When Lori's ex-boyfriend, Will Rollins showed up, Kia dragged Charlie away to dance.

Kia later became a target of dream demon Freddy Krueger. In the hopes of staving off Freddy's influence over them, Kia and the others went to the Westin Hills Psychiatric Hospital in order to procure quantities of the dream suppressant drug, Hypnocil.

Jason Voorhees attacked the hospital and Freddy managed to get his clutches into the unconscious mind of a stoner named Freeburg. Possessing Freeburg, Freddy succeeded in taking Jason down by injecting him with heavy doses of a strong tranquilizer.

Together, they came up with a plan to bring an unconscious Voorhees to Camp Crystal Lake so that Lori could bring Freddy out of the dream world and the two would hopefully kill one another.

On the drive, Jason began coming to, and the group noted that he appeared to be drowning. Will told Kia that she would have to perform CPR to save him which it's a task that she was not looking forward to at all.

However, Kia was prepared to do what was needed. As it turned out, Jason awoke fully and his sudden alertness caused Will to lose control of the van and it crashed off the side of the road. Kia and the others all survived the crash.

Fortunately, they were just outside Camp Crystal Lake. Unfortunately, Lori was now also awake and had brought Freddy Krueger into the real world.

Kia provided a distraction to allow Lori and Will the chance to escape. She taunted Freddy, keeping his focus on her, unaware that Jason Voorhees was looming behind her.

She called Freddy a "faggot" and made fun of his sweater, citing it as Christimas attire. She further poked fun at his masculinity comparing the size of Freddy's claws to that of Jason's machete.

Freddy was simultaneously impressed and irritated by the woman's brazen demeanor, scoffing when she said, "You're not even scary". He allowed himself a wry smile as he saw Jason approaching from behind.

Jason slashed at her with his machete and the impact of the blow was so great that it sent Kia flying into a tree, killing her instantly.

Kia was upset that the police was lying about Blake's murdering Trey, his dad and his own life

Whoa, Lindermen. Let me give you tip

Kia almost lose her nose in her nightmare 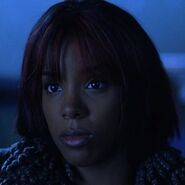 You know, I always think that you're a bed wetter -Kia rudely talking to Lindermen

Kia was attacked by Jason

Kia's Death
Add a photo to this gallery
Retrieved from "https://hero.fandom.com/wiki/Kia_Waterson?oldid=2173989"
Community content is available under CC-BY-SA unless otherwise noted.