The Chosen One (Real Kiana)

Hanging out with Himeko and Mei

Herrscher of the Void

Kiana Kaslana is the main protagonist of the video game, Honkai Impact 3rd. She is a descendant of Kallen Kaslana and one of the Valkyries along with Raiden Mei, Theresa Apocalypse and Himeko Murata.

Kiana's voice actresses are Tao Dian (陶典) in Chinese and Rie Kugimiya in the Japanese dub.

Kiana is a young girl with a rather curvaceous figure, She has white hair and blue eyes, as an outfit, she wears a sailor fuku or her valkyrie suit who is Catsuit-like armor who has two gun carriers on her back.

Kiana is a passionate, sweet, and innocent girl who always tends to see the world not as a dark place but as a place that one needs to fight.

She borders a hatred against the Hounkai beast as well against Sirin for the atrocities that she has made, nevertheless, she is capable of giving others a chance or two to redeem, which proved correct with Raiden and Himeko after their brief possession.

Her courage and strength made her immune to the Honkai influence, specifically Sirin.

Kiana was born to Siegfried Kaslana and Cecilia Shariac on December 7, 1998. Nearly one year later, Cecilia was deployed despite still on maternal leave to face the 2nd Herrscher. Due to her weakened state after giving birth, Cecilia unfortunately could not overpower the 2nd Herrscher alone and needed to fully use her divine key which would be fatal and as a failsafe, Otto Apocalypse, bishop of Schicksal, ordered that a tactical missile be fired at their location. Moments before the missiles reached their target, however, the 2nd Herrscher's influence disappeared, signaling Cecilia's defeat over the 2nd Herrscher. Unfortunately, at this point, the missiles could not be stopped, and Cecilia with the rest of Squad Snowwolf died in the explosion.

One year later, Siegfried and Theresa worked together to smuggle Kiana away from Schicksal, no longer trusting Otto for his hand in Cecilia's passing. It is revealed in a secretly recorded memoir that Otto retrieved Kiana while Siegfried only managed to escape with subject K-423, a clone of Kiana made to serve as a host for the fragmented core of the void which contained the dormant second Herrscher, Sirin. She was created similarly to Theresa, who was a biological recreation of Kallen Kaslana and the Honkai Beast, Vishnu. Though Siegfried escapes Schicksal, Theresa is told the truth about Kiana's location and to assure her safety she surrendered to Otto but negotiates to relocate to the far east and build a school, St. Freya High School where Otto promises not to interfere.

Siegfried took care of K-423 secluded from all of his prior connections and continues to fight the Honkai menace whenever possible. In a flashback, K-423 reveals that Siegfried treated her rather brusquely before she turned 9 years old. Somehow on her ninth birthday, she lost all of her prior memories. Siegfried states that a blow to the head caused this. When K-423 asks what her name is, Siegfried replied that all that matters is that she was his daughter, her last name was Kaslana, and that her mother died shortly before she became two years old.

He continued reluctantly for K-423, even obtaining anything that she asked for, but he would never call her by the name Kiana knowing he failed to save this actual daughter. He continued to be unattached to her for 2 more years while continuing the fight Hounkai occasionally. Each time he returned from battle, K-423 would note that he was heavily wounded. When she questioned his motives for putting his life in danger, he explained that his Kaslana blood urged him to protect people from the Honkai and smiled. This was the first time K-423 witnessed joy in her father. His response resonated with her deeply. K-423 decided that she, too, would like to become a true Kaslana just like her father.

Siegfried began to teach K-423 the signature "Kaslana gun kata," but forbid her from joining any true battles. One night, Siegfried returned heavily wounded once again. After treating him and putting him into bed, K-423 heard Siegfried's Honkai detector react to a nearby signal. Resolved to keep her father out of danger, K-423 took her father's Judgment of Shamash and went out to attempt to defeat the beast alone. Unfortunately, the beast proved to be much more powerful than she could have handled. Just before the final blow, Siegfried catched the Guard's lance bare-handed and defeated it. Sure that Siegfried would be furious, K-423 apologizes to her father and explains that she went out to protect her father because she didn't wish to see him hurt anymore. When hearing this, Siegfried realized that though this might not be his original Kiana, she has the soul of a Kaslana. Brought to tears, he and embraced his daughter realizing it is her 11th birthday, and apologizing for not spending time with her on her birthday. He then told her how proud he was and gave K-423 her most memorable birthday present: her name, Kiana Kaslana.

The two of them made an oath together to "Fight for all that is beautiful in this world," the slogan of House Kaslana. Though their living arrangements remained paltry for quite some time, Kiana and Siegfried fostered a strong familial bond. Sometime later, the Void Core began to gather enough energy to reawaken Sirin. She opted to take control of Kiana's consciousness while she slept, and attempted to attack Siegfried, making him unleash Shamash to try and subdue Sirin. He successfully stopped her full awakening but lost his arm in the process. Realizing that his lifestyle would bring Kiana harm as he was a target for Sirin and he couldn't bring himself to harm her, he left Kiana his cellphone with instructions to head East while he watched over her from a distance where Sirin wouldn't be able to notice his presence.

Kiana looked for Honkai activity in hopes to find him being a true Kaslana. She transfers to a high school in Nagazora, Japan where she had heard of a spike in Hounkai energy. It is from a student in that high school named Raiden Mei who unbeknownst to Kiana, had a Herrscher gem inside of her. Mei was slowly beginning to awaken as a Herrscher, and was allowing her Herrscher personality to take control and contaminate other students. Those contaminated with Hounkai energy turned them into zombies as a form of justice from her docile side being bullied. In fear of Kiana getting too close, Mei's Herrscher form tried the same disposal method but was caught by surprise that Kiana had Honkai energy adaptability. The two of them fought until exhaustion and her Herrscher form admitted defeat vowing to return to take Kiana's life. The docile Mei, became aware of how addicted she was becoming to her Herrscher powers felt guilty and thankful for Kiana's interference in her awakening and the two developed a romantic relationship.

Due to the time Mei was in her Herrscher form, enough Hounkai energy leaked out to create a ripple effect attracting Hounkai beasts and turning the students body into zombies. One other student from their class, Bronya Zaychik was unaffected from the energy therefore also having Honkai energy adaptability. The trio opted to seek refuge from the approaching beasts and zombies. This event would later be known as the 3rd Honkai Impact, from which the game's name was derived.

Climbing up an apartment building, they assumed they were safe when they are caught off guard by a Honkai beast knight, and Kiana took a grievous wound while protecting Mei. Due to the emotional duress of losing her most treasured person, Mei's control over her Gem of Conquest weakened, and the 3rd Herrscher prematurely re-surfaced. Annihilating the knight, she entered a berserk mode getting the attention of the Hyperion. Unaware of the situation, the Hyperion assumed the Herrscher was fully awoken and a battle between the 3rd Herrscher and Himeko Murata ensued. Before the 3rd Herrscher could have launched a fatal attack, Kiana reveals that she is still alive and with her bare hands' grabs and absorbs the Honkai energy of the wings of the Herrscher, a feat impossible for any normal human or Valkyrie. Forcing the Herrscher to retreat to slumber within Mei, the girls exhausted from running and fighting succumbed to their exhaustion. Himeko retrieved them, as the Hyperion set sail to their Headmaster, while Bronya avoiding the fight, snuck on unnoticed at first to stay with her former classmates.

After docking, Kiana, Mei, and Bronya were all brought to St. Freya High School, a school for Valkyries, fighters of the Hounkai. Theresa greeted Kiana as she wakes up in the infirmary and introduced herself to Kiana as her aunt noticing her niece's gap in memory. Though Kiana, unable to remember having anyone besides her father, was aware of Theresa being overly familiar, she still agreed to become a Valkyrie to obtain information from her after being baited with Siegfried's location and also how best to protect Mei from the Herrscher lurking within her. Revealing that her classmates have also agreed to join the school, Kiana, Mei, and Bronya all begun the Valkyrie curriculum.

Sometime after enrolling in St. Freya High School, a new honkai energy surge was picked up and Theresa dispatched Himeko's student team to deal with it. Unexpectedly waiting for them in the air as an alarmingly large battleship found flying in monitored airspace south of Soukai City. Himeko deploys B rank Valkyrie Kiana Kaslana in her White Comet battlesuit, to make her way to the suspicious battleship while taking out low-level Honkai beasts that have descended upon the city.

Upon reaching the battleship, Kiana joined Mei to investigate the outside of the ship. Kiana again loses consciousness, leaving Mei to defend the ship, trying to buy Bronya enough time to disengage the alarm and defense protocols of the ship. As the situation got dire, Mei felt like she has no choice gave into her Herrscher personality to take out the Emperor-class Honkai beast that attacked the two, only to also become exhausted and collapse into the arms of Bronya who was just finishing the hacking process for the mysterious battleship.

Accessing the Moonlight Throne database, Bronya noticed that something was wrong but loses control of her body and turns into Black Nucleus. Under the control of some force, she turned from searching the database to confront and attacked the recently awoken teammates but was luckily subdued by her friends. Kiana and Mei opt to keep the body-snatching event from Himeko or Theresa in fear of losing their friend and trusting Bronya's innocence. Himeko's communication cut back in and she asked for a briefing. After getting a vague report from Kiana, knowing the girls are keeping something from her, she played along with the girl's report since everyone was alive.

The message on the Moonlight Throne said "This is my gift for you Kiana, find the Gem of Serenity, Desire, Conquest and Haste, and the world will be yours."

Kiana, unaware of who would gift her a Battleship since her father didn't have that kind of money, opted to send the "Selene" to Shicksal for inspection. 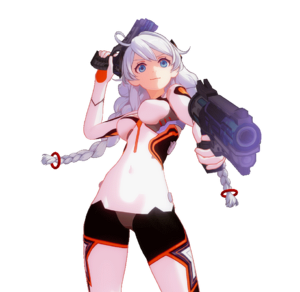 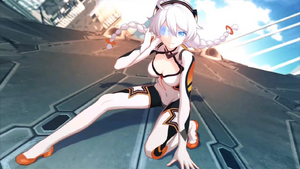