Kiba Inuzuka is one of the main supporting characters of the Naruto anime/manga series and and the Boruto: Naruto Next Generations anime/manga series. He is a member of Konohagakure's Inuzuka clan. He and with his canine companion, Akamaru, are members of Team Kurenai.

Kiba often argues with Shino over what course of action the group should take, particularly when Shino advises caution. Kiba often sees himself as the group leader, and becomes offended at any of Shino's actions that he perceives as challenging his leadership. It seems that there was a contest for leadership of Team 8 during the Chūnin Exams, as Kiba said Hinata voted for him. Despite his disagreements with Shino, he considers Shino a friend, and respects his fighting capabilities. Kiba has became very close to Hinata and acts brotherly toward her, but tends to worry about her, urging her to be strong before the second phase of the exam, and to forfeit rather than face a dangerous opponent. Kiba likes to playfully tease Hinata about her affections for Naruto Uzumaki. This usually includes telling her that Naruto is nearby, or just mentioning her reactions to him to other people, much to her embarrassment. Despite this, they have a strong friendship.

In the anime, mostly in the filler arcs, Kiba is shown to also get along well with Naruto, despite their arguments. This seems to be proven when it was shown that Kiba, Akamaru, Naruto, Chōji, and Shikamaru skipped classes together and play in the park. Those three seem to be some of the first true friends he made in the village. They also have somewhat of a rivalry that stems from childhood. He was shown to have become frustrated with Naruto's growth and is determined to surpass him. He even showed admiration towards Naruto, stating that he wanted to become like him.

Kiba also dreams of becoming the Hokage someday and expressed this desire both during his fight with Naruto during the Chūnin Exams as well as during the Fourth Shinobi World War, where he deduced that if he fought and gained a name for himself during the war, it would be a step in the direction of becoming the Hokage, an ideal he mentions again later on. In his Infinite Tsukuyomi, Kiba dreamed he was Hokage and also desired to have a national holiday for all dogs.

Kiba's personality and fighting style is further complemented by his wild appearance as while clearly human, he has several physical traits more akin to animals. Like most of his clan, he has messy brown hair, sharp black eyes with vertical slit-like pupils, pronounced canine teeth, and nails that he can change into claws. He also has the distinctive red fang markings of the Inuzuka clan on his cheeks.

During Part I, Kiba's attire consisted of dark greyish pants reaching to his calves and a grey, hooded fur-lined coat, with the hood usually placed on his head, over an apparent plate of armour and fishnet undershirt seen in his fight with Sakon and Ukon, with a blue forehead protector and blue sandals.

During Part II, each piece of his outfit, including his forehead protector, switched to a black colour, with his coat being replaced by what looks like a nowadays leather form fitting black jacket, with zips over the chest and sleeves, along with black pants and sandals, also zipped, matching the jacket. He, along with the rest of the Konoha 11, dons the standard Konohagakure shinobi outfit during the Fourth Shinobi World War.

As a child, Akamaru was given Kiba by his mother, Tsume, and the two became very close soon afterwards. Before entering the Academy, Kiba and Akamaru played together a great deal, resulting in Tsume getting angry because they weren't training enough. During Kiba's time at the Academy, he often cut class with Akamaru, stating that he wasn't suited to sit still at a desk, or otherwise getting into trouble, along with Chōji Akimichi, Shikamaru Nara, and Naruto Uzumaki. Together, these four would skip class and go to the practice hall (not to practice). They thought that it was fun to also test the patience of Iruka Umino, their Academy instructor. One day, Kiba fell asleep during class and upon waking up saw Naruto for the first time, attempting to use the Transformation Technique to turn into the Third Hokage, failing twice. This caused Kiba to find Naruto incompetent, and he became among those who ridiculed him.

At some time in the past, Kiba knew his father; but because of his mother's attitude, Tsume scared him away, leaving him just with her and his sister Hana Inuzuka. Despite this, Kiba stays in a close relationship with his sister and mother, although he seems to agree that Tsume is rather frightening. 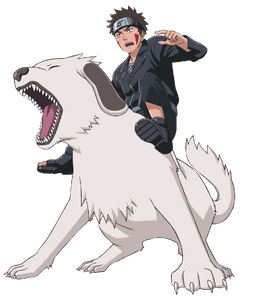 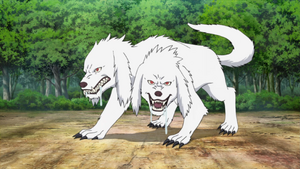 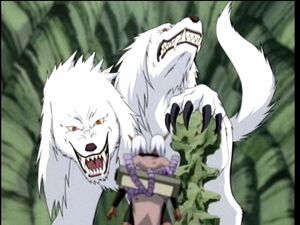 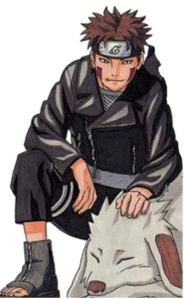 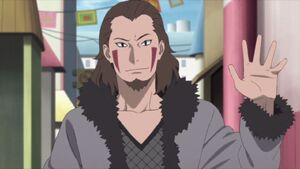 Kiba from Boruto: Naruto Next Generations 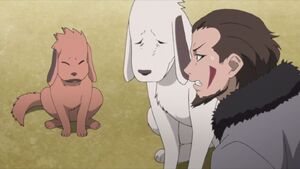 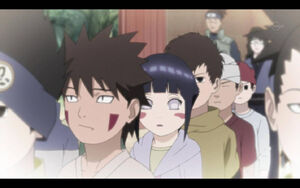