Eating
Flirting with Jinx and other cute girls
Idolizing the Flash

To convince Jinx to redeem herself (succeeded)

To help protect the world from evil threats.

Madame Rouge
The Brotherhood of Evil

Kid Flash is the major supporting character of the 2003 TV series, Teen Titans. He is a superhero, as well as an Honorary Titan, the partner of Flash and the romantic interest of Jinx.

He is voiced by Michael Rosenbaum, who also voices The Flash.

He came to Jump City after the Titans East, following a period of filling in for the Titans, had been called back to their headquarters. He quickly came to blows with the H.I.V.E. Five, who couldn't at first apprehend him. However, Kid Flash took a close personal interest in their leader, Jinx.

He eventually revealed himself at the museum, where Jinx was alone and trying to steal back the necklace. Kid Flash tried convincing Jinx to leave the H.I.V.E. Five and join him to fight crime, but Jinx blasted him with her hex and the H.I.V.E. Five arrived, ready to take Kid Flash down. However, Kid Flash decided to stick around and fight, but his confidence overtook him, and he slipped on a puddle of water and was knocked unconscious by Jinx.

He was captured and Jinx contacted Madame Rouge of the Brotherhood of Evil to present Kid Flash to her in order to win her respect and thus become a recognized villainess. But Kid Flash decided not to stick around for that and escaped, but not without first dismantling the H.I.V.E. Five's headquarters. Kyd Wykkyd's stealth, See-More's see through vision, Gizmo's technical weapons, and Jinx's hex blasts proved no use; Kid Flash is just too fast for them. Exasperated, Rouge went after him, Jinx did as well, desperate to prove her worth to Rouge. Rouge found him first and engaged Kid Flash in an arduous chase; Kid Flash only barely managed to get away and hide in a warehouse, where he was found by Jinx. She disabled him and presented him to Madame Rouge as her prisoner, but Rouge struck her aside. Then Kid Flash was released by Jinx and she struck Madame Rouge, letting Kid Flash get away. Jinx decided to change her ways of evil and joined forces with Kid Flash after he leaves her a rose.

When the Brotherhood of Evil finally executed its plans to eliminate all young superheroes around the world, Kid Flash and Jinx (although Jinx didn't have a communicator while Kid Flash did) were among the few who managed to elude capture. The two were the last to arrive at the Brotherhood's base. Kid Flash made up for his absence by carrying off all the unconscious, defeated villains to the freeze machine, where they were made into statues, while Jinx knocked Kyd Wykkyd, Mammoth, Gizmo, and Billy Numerous unconscious, as well as making Mother Mae-Eye disappear and taking down Madame Rogue.

Kid Flash makes several appearances in the Teen Titans Go! comic series. He and Jinx have since formed a romantic relationship, but it occasionally falls on rocky times since Kid Flash still can't suppress his flirtatious nature. In issue #34, he participates in a racing competition against Más y Menos, but he loses the race because he flirts with Raven, Argent, and other female Titans on the way and infuriates Jinx. In issue #36, Jinx is captured by the Gordanians, with Kid Flash helpless to stop them. Eventually, thanks to him, Wonder Girl, Aqualad, Speedy, Beast Boy, and Robin, his girlfriend was freed along with the other captured Titans. In issue #39, they are together, though their relationship is a bit strained at the time. When Kid Flash tries to apprehend Andre Le Blanc, he is hindered by Larry, who is on a match-making quest with Cupid's bow and arrows and inadvertently makes three female pedestrians (one an elderly lady) fall in love with Kid Flash, unintentionally inciting Jinx's jealousy once more.

In issue #53, Kid Flash and Jinx have since moved to Keystone City where they continue to fight crime. After a cold encounter with one of Jinx's former boyfriends and his sister, she and Kid Flash share their first official kiss.

Kid Flash wears a red and yellow one piece unitard which includes his yellow mask. From his head to his waist, his costume is yellow, and his legs are red, ending with yellow ankled-high boots. His mask has two big eyeholes and it leaves his nose, mouth, and chin exposed. Similar to his uncle's costume, he has two red lightning bolts on the sides of his heads where his ears would be. Kid Flash has spiked, red hair which adds significant height. He also wears long, red gloves. He also has bright blue eyes.

One of Kid Flash's most notable personality traits is his wit. Because his super-speed literally allows him all the time he needs, Kid Flash is very laid-back. He likes to wise-crack and make snappy quips, and seems to be quick with making decisions as well. Perhaps due to his cocky nature, he sometimes finds himself going far too fast for himself, which can lead to mistakes. Despite this, Kid Flash is very charming and has a kind heart that can see people for who they really are, which he displayed in his interactions with Jinx.

He is shown to be very insistent with pursuing somebody he fancies as shown in Lightspeed. After he was taken by Jinx, he tried multiple times to get close to her, but she always struck him down. Despite this, he kept trying and eventually succeeded.

As seen in Teen Titans Go! issue #34 "The Great Race", Kid Flash enjoys flirting with any pretty girl he sees. During the race, he stopped to flirt with Argent, Raven, and other random women (much to Jinx's jealousy and anger).

Even though he is laid back and sometime seems like he doesn't have a care in the world, occasionally he shows some parts of himself that does not seem like him. Sometimes he worries a lot about Jinx and has concerns about her. In Fearsome Five, he is worried about Jinx and he said that he hated to see her like that. When Kid Kold (Jinx's ex-boyfriend) and Ice Kate are arrested he shows some concern about her past, but Jinx stirs away from explaining the whole story. This proves that he isn't as laid back as he seems.

As being her boyfriend, it is shown that Kid Flash and Jinx truly care about each other. In Lightspeed, their relationship started out very unstable, but as shown in the ending of the episode, she finally realized how great of a guy he is. In the comics, their relationship is more romantic, as they go to carnivals, movies, etc. Jinx however easily gets jealous when Kid Flash flirts with the other girls. Kid Flash and Jinx are a strong couple in the series, despite only featuring them for a few episodes. They deeply care for each other and they help each other when one is in trouble.

Kid Flash is very good friends with the twins. As shown in the comics, they love to hang out with each other. Even when they argue or have a friendly competition, they still manage to keep their friendship stable.

An apparent drawback to Kid Flash's super-speed ability is that he needs to rest and consume plenty of food (most likely due to his super-fast metabolism), in order to maintain his superpower. This was especially shown in Teen Titans Go! Many of his appearances showed him eating in mass quantities. Madame Rouge was likely aware of this downside, as she made it very clear to Jinx that Kid Flash should not be given food or drink while under capture. 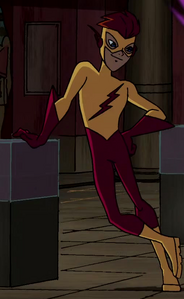 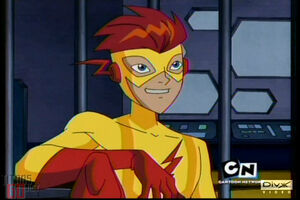 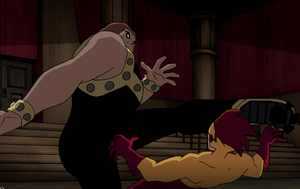