Wallace "Wally" Rudolph West (aka Kid Flash) is a fictional character, a superhero that appears in comic books published by DC Comics. He is the first Kid Flash and the third Flash.

West visited the CCPD laboratory where Barry Allen worked and the freak accident that gave Barry his powers happened, bathing West in electrically charged chemicals causing him to have the same powers as the Flash. West became Kid Flash and became a member of the Teen Titans since he was good friends with Dick Grayson. West would spend more time with Barry and Iris since he had a bad relationship with his parents.

During the 1985-86 miniseries Crisis on Infinite Earths, Barry sacrificed himself to save the world when he destroyed the antimatter cannon. West was coaxed by Jay Garrick into assisting the heroes against the Anti Monitor, West was affected by the anti matter energy, which put his disease into remission. In the aftermath, West decided to become the new Flash.

Wally West appeared in the Flash #30 five years later from the current time line as an African-American and new backstory. West is shown to be dead five years into the future from a car crash which prompted an older version of Barry Allen to execute his enemies so he can never be late again while looking at a news article about a funeral held for West. Although speculated that Daniel was the father of Wally since he is shown to be Iris's only other sibling, writer Robert Venditti has since confirmed Iris has another brother who has yet to be seen but is indeed the father of Wally, and Wally himself is now African-American on his mother's side. In the Flash Annual #3, it is revealed West has a father named Rudolph who abandoned him and his mother when West was a baby and West's mother went missing during the Crime Syndicate's invasion of Earth. West was caught by Barry for painting graffiti on the wall. Iris told Barry to watch West for a while since West looked up to his uncle Daniel, who was the Reverse Flash in this time line.

Appearances on the Media 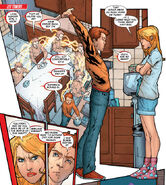 Add a photo to this gallery
Retrieved from "https://hero.fandom.com/wiki/Kid_Flash_(Wally_West)?oldid=1707132"
Community content is available under CC-BY-SA unless otherwise noted.