To figure out Atlantis' past and restore the city to its former greatness (succeeded).

Kida is the Atlantean princess and the deuteragonist from Atlantis: The Lost Empire and its sequel, Milo's Return.

She is the daughter of the King Kashekim Nedakh, King of Atlantis, and later becomes Queen, and the assumed wife of Milo.

She is also a warrior princess, making her strong and very skilled at combat. It is mentioned that several thousand years ago, Kida would have killed outsiders on sight. By the present time, however, Kida has become so curious about Atlantis's past that she is willing to let in outsiders with the hope that they could help her rediscover Atlantis's history, even as far as taking a liking to Milo. She is shown to love her father, and later Milo, very much. Although she can seem quite forceful, violent, and aggressive at times, she has a kind heart, and a general respect for all creatures.

Like all Atlanteans, Kida has white hair and tanned skin. She has blue colored tattoos, which appear to change slightly after she becomes Queen, and large blue eyes. She also wears a shard of the crystal around her neck. As a princess, she wears only a simple blue bikini, the bottoms are covered with sarong type skirt and she goes around barefoot, but changes into more elaborate clothing after becoming Queen. With the power of the Atlantean crystal, Kida and the other Atlanteans are given abnormally long lives. Though Kida is roughly 8,500 - 8,800 years old (according to Milo), she physically resembles someone in their early 20's.

Kida was a child when Atlantis came to its downfall and witnessed her mother being taken from her by the power of the crystal, known as the Heart of Atlantis. Most of the city was safely moved by the crystal near the center of the earth, and the king hid the crystal away from the city to protect Kida from being taken into it just like his queen. The king made laws forbidding the citizens from learning to read, to prevent them from trying to control the crystal's power. He had earlier tried to control the crystal himself, but it had led to Atlantis's downfall.

Kida becomes exceedingly curious about Atlantis's past and the disappearance of her mother. She and other Atlantean warriors search through the caverns of their underground world and come across the team of explorers searching for their city, and they follow and spy on them. Kida comes across an injured Milo, and instead of killing the outsider or pressing him for questions, she heals his wound and instantly runs from the other coming explorers. Once in Atlantis, she takes the explorers to her father, as she tries to convince the king to let them help restore their crumbling city with their knowledge. When the king allows them to only stay one night, Kida decides to find Milo and ask him questions about the surface world, as he also has questions for her. She takes Milo around the city, and their friendship and trust quickly grow.

She takes him to an underwater mural with Atlantean writing that she can't read, and asks Milo to translate. The writing not only tells of the crystal's power, but also allows them to work various machines which ran off its power. When they surface, Kida is taken hostage by Rourke's crew as bait for Milo and the king to hand the crystal to him, in which Rourke and the crew think that selling it would make them incredibly rich on the surface. Once the location of the crystal is found by Rourke, Helga, Milo and Kida, the crystal summons Kida to it to protect the city, sensing Rourke's evil.

It is mentioned that the crystal will merge with someone from the royal family in times of danger. Before merging with and becoming the crystal power source, she tells Milo in Atlantean not to worry and that "all is well". She is almost carried away to the surface by Rourke, but is saved by Milo, the remaining crew members, and Atlantean warriors. Her father having been murdered (from a punch from Rourke), she becomes the queen of Atlantis with Milo by her side, who had chosen to stay with her instead of returning to the surface.

Kida, as Queen of Atlantis, is working with Milo, who is now her husband, to use the Heart of Atlantis to rebuild the civilization. They are unexpectedly visited by their comrades from the first film. They learn that a creature called the Kraken, which is presumed to be an Atlantean defense mechanism, is attacking a town. Kida and the others travel and are able to stop the creature.

While Kida adjusts well to the outside world, she feels guilty because there could be more Atlantean machines wreaking havoc. Kida and the others travel to Arizona, where they find a town with a statue that appears to be of Atlantean origin. They are also forced to confront coyote sprits who oppose them. A Native-American man is able to serve as a median, and Kida learns that she has the power to choose Atlantis's destiny.

Later on, Kida and friends travel on a search for the Gungnir, a mythical spear of Atlantean origin. They track the thief, a man named Erik Hellstrom, to the Nordic Mountains. There, he presumes Kida to be his daughter (Erik believes himself to be Odin), and kidnaps her. Hellstrom intends to end the world by bringing about Ragnarok, and creates various beasts. Kida is able to retrieve the spear after Vinnie provides a distraction.

As a result of the adventures, Kida learns about the power of the Atlantean crystal, and comes to believe that her father was wrong for hiding it. She combines the Heart Crystal with the spear, and uses its power to raise Atlantis to the surface. It should also be noted that unlike in the first film, Kida for some reason does not have the extra tattoos obtained on her face from her wedding to Milo/coronation as Queen. 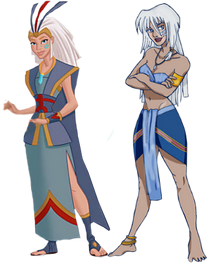 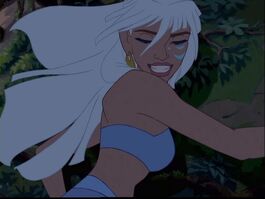 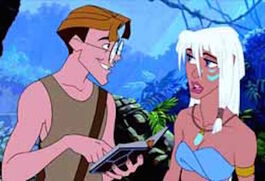 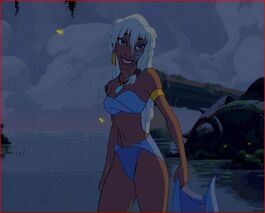 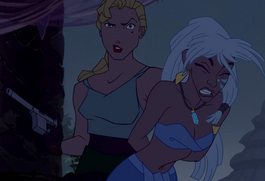 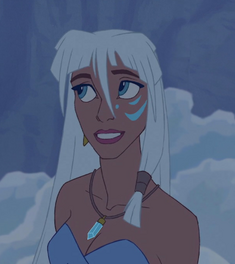 Kida Under The Crystal's Control

Kida with Milo to Save the Atlantis

Retrieved from "https://hero.fandom.com/wiki/Kida_Nedakh?oldid=2277062"
Community content is available under CC-BY-SA unless otherwise noted.