Steal enough money to escape the continent and the Baron (formerly)

Each other (Adoptive sisters)

Kiera and Catalina Schwitz, also known as Angry and Red are minor, but later major protagonists in Tangled: The Series, the follow up animated series to Disney's 2010 animated movie, Tangled. They are two young girls with no family, who, after getting involved with a dangerous crime lord known as The Baron, started a lif of crime with the objective of obtaining enough money to escape Corona and the Baron as well. After they met Flynn Rider and Lance Strongbow, however, they changed their ways, stopped stealing, and started a new life.

They are voiced by Vivian Vencer (Angry) and Ruby Jay (Red).

Angry and Red's past is mostly unknown, but they're two orphans who met each other, presumably in a orphanage, and scaped there some time. They eventually stealed some unknown thing (most likely money) from the powerful crime boss, the Baron. After that, they'd constantly live running form the Baron's henchman, especially a man named Anthony, Baron's right-hand man. They'd start stealing people in the kingdom of Corona to acumulate enough money so they could escape the Baron and start a new life somewhere. Some of their lines implies they tried to adopted or accepted by some people, but after some rejections, they lost their faith in the adults, and lived by themselves. Their fame as the thief who robbed and no one could even see him, made them being called the "Silent Striker", and Flynn Rider, alongside Lance Strongbow, two former master thieves, were assignes by the Captain of the Guards to arrest the Silent Striker. While they succeeded, the King couldn't lock two children, and asked Eugene (Flynn) and Lance to take care of them and teach them the right ways.

Their relationship started out very edgy, and Eugene didn't like the idea of having to teach the children how to stop robbing, but eventually, he symphatized with them, and saw that they didn't like stealing, and only did that because they were afraid of something, or someone. Angry and Red ran out of the castle to the forest, trying get to their hideout, where they put the produts of their steals, but in the way, they were gaught by Anthony and the Baron's goons. Eugene and Lance, however, as they also had a past with the Baron, offered themselves in exchange of the girls. Anthony accepted, and Angry and Red went to the hideout to get out of Corona, but Red convinced Angry that they should save them because they saved them, whiled the other adults just gave their backs to them. Angry agreed, and they fooled Anthony and his henchmen by locking them where Flynn and Lance were. They gave eberything they stole back, and went out to the forest, to find a new purpose

In season two, Angry steals a psychic monkey that theorically should help her find her family, much to Eugene displeasure, but she ensured that she's give the mokey back after finding her family. Vigor (the name of the monkey) guide them to a city named Fortuna, where people were being tormented by nasty thieves known as the daylight thieves. When they found an isolated house, that they fought that was Angry's family's house, they knocked the door, and were well received by the house owners. However, when Flynn and Rapunzel noted, that in the house there was a object that a citzen of Fortuna said that was stole by the Daylight thieves, they noticed that they weren't Angry's family, but one of the thieves destroyed the bridge to the house, but when he and his wife tried to kill the girls, as they only accepted them for not wanting to give up their normal couple disguise, Angry and Red bet them up and wounded them up with a rope. Eugene, however, made Angry relieze that family is the one who's always by our side, and tha Redwas her family. Angry and Red disppeared into the forest once again, now considering each other like sisters.

Both Angry and Red are short, wear black pants, and have painted red scars under their eyes. Angry is asian, with a palid skin and asian-like eyes, she has black short hair, wears grey clothes and a red scarf, along with a belt.

Red has long red hair (hence her nickname) with a small, white and blue flower in it. She has freckles, green eyes, and very clear, white skin. She wears dirt green clothes, with some dark green strips around it.

They are very cynical and untrustworthy in the start, due to lack of a good representation. They started to change as soon as they saw that Eugene and Lance actually wanted to help them. Angry is very compassionate with her friends and family, but is the more serious of the duo, often getting less emphatical when she gets sad, and having issues in admitting that she made a mistake. She gets more and more kind every appearence she gots in the series however. Red is shy, and don't usually talk too much, only when she is curious about something in a way she couldn't ask other than talking, or with people she trusts a lot, like Angry and Lance. Even when she fights, she is always very calm, and is the most gentile and emphatical of the duo. 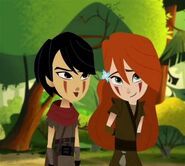