Heroes Wiki
Register
Don't have an account?
Sign In
Advertisement
in: Spoilers, One Piece Heroes, Female,
and 25 more

Kikunojo of the Lingering Snow

Kikunojo of the Lingering Snow, mostly known as Kikunojo or Kiku, is one of the major characters in the Wano Country Arc from the anime and manga series One Piece She is the younger sister of Izo, the daughter of the dancing school head of the Hanayanagi School in Ringo. She also is a serving as one of Kozuki Oden's Nine Red Scabbards, a samurai for Wano Country retainer for the Kozuki Family. She was 22 years old, traveling as 20 years forward at the time which born in 42 years old.

During this time of the forward of the time, Kikunojo is working as a tea house poster girl at Okobore Town when gathered around from information from by planned rebellion.

She was voiced by Mariya Ise in Japanese.

Kikunojo is a young feminine woman with long dark purple or dark blue hair has falling into the back, but it's very tall, towards under like than Monkey D. Luffy and Roronoa Zoro, as known as her older brother, Izo in 287 and dark purple eyes. She noting by the beauty, giving the past reputation as a "most beautiful swordsman in Wano Country".

As a present, she wears a yellow kimono with a orange chrysanthemum floral patterns, white tabi, and black-soled zōri. While Kikunojo has a combat, her ponytail ties into a red ribbon with rolls over the kimono sleeves has a tasuki, and wears a white Noh hannya mask. From this raid in Onigashima at the battle against the Beasts Pirates, she has a set of full Japanese armor.

As a samurai, she despite her been transported into her future, such as more masculine clothing typical. During arrives at the future, she begin to shows to sign her more feminine side, at much has her red lipstick and dressed more than her feminine clothing.

After the Scabbards' battle against Kaido, she has left arm with her sliced off on the one of each side attacks.

Kikunojo is a loyal, feminists, and legendary one of the female samurai as her reputation Scabbards, she being as describes herself to "as woman to heart", and plus she taking herself with presents to living with as traditionally feminine manner. She was very loyal to her friends to upbeat person. Her friends, she helping and nurturer, while seems she was very treating Zoro's injuries and tending with Tama while she been healing at the poisoned. 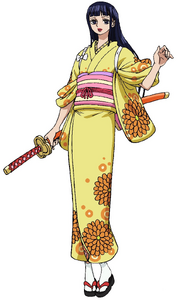 Kikunojo's concept art from the anime. 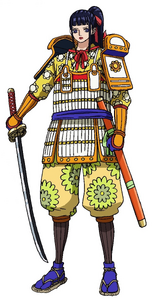 Kikunojo's color scheme in the manga. 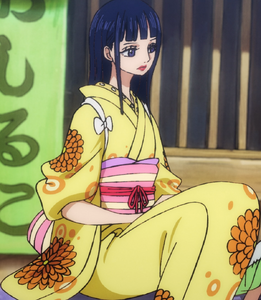 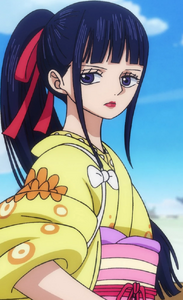 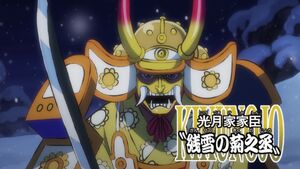 Kikunojo is ready to fight. 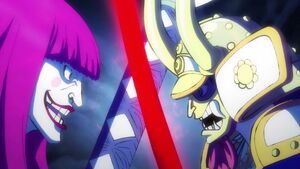 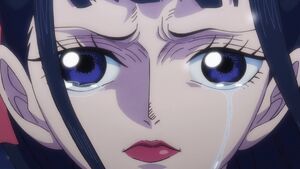 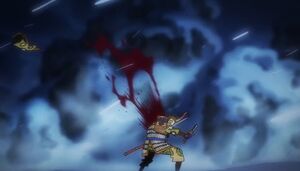