Kilowog is a fictional character and superhero from DC comics, and is one of the main characters of the Green Lantern comic book series. He is a Bolovaxian member of the Green Lantern Corps of the Sector 674, who held from home planet as a brilliant geneticist. He is is a drill instructor, responsible for teaching and mentoring newly-recruited Green Lanterns in Oa. He is also a friend and ally of Hal Jordan, Kyle Rayner, John Stewart, and Guy Gardner, and has been a member of the Justice League International.

He was created by Joe Staton and Steve Englehart, and first appeared in Green Lantern Corps #201 in June of 1986.

While he served the Corps, Kilowog's planet was destroyed. Wiping out his people and most importantly his family. Kilowog continued to serve the Corps and became close friends with Hal Jordan, the Green Lantern of Earth. He originally trained Jordan as a new recruit when he was first inducted into the Corps.

Kilowog aided Jordan on their escapade in Frontier Space to confront the Red Lantern Corps after the group attempted to murder a Green Lantern, nine months after the murder of M'Ten. Kilowog and Hal were joined, in their quest, by a Red Lantern named Razer, who they originally wanted to keep captive before he saved the two from their certain deaths. Kilowog would argue with the rogue Red Lantern frequently on their quest and continued to do so up until the defeat of Atrocitus.

Kilowog returned to his previous position of training young Green Lanterns before he was recruited by Hal for a new team to face off against Anti-Monitor, a being seeking to destroy the universe and eliminate all of existence.

Kilowog was born on the planet Bolovax Vik, and became a brilliant geneticist and later a Green Lantern when the previous lantern, Branwilla died. Though Kilowog was chosen to become a member of the corps, it meant that leaving his home planet would be tainted as exile. Despite this, Kilowog joined the Green Lantern Corps, and became the corps's best drill sergeant and instructor for rookies.

During his tenure as a Green Lantern, Kilowog would train Hal Jordan, who was chosen to be the next lantern after the death of the legendary Abin Sur. During the "Crisis on Infinite Earths", Kilowog's home planet was destroyed, and he placed the life energies into his ring to save his people until he found a home for them. However, the planet he found for them was destroyed by Sinestro, and Kilowog was unable to save them again. Kilowog would later be assigned to Earth, and helped Soviet scientists work on the Rocket Red Brigade. He would also become good friends with John Stewart, Salakk, Katma Tui, Ch'p, and also held feelings for Arisia of Graxos IV. In addition, Kilowog also helped Guy Gardner with the Justice League, becoming a repairman and mechanic for the team.

When Hal Jordan decided to destroy the corps after his home city was destroyed, Kilowog battled Jordan while he was possessed by the entity Parallax. Kilowog was killed by Jordan, but he returned as a vengeful spirit known as the Dark Lantern, being revived by aliens who used black magic. The Dark Lantern attempted to get revenge on his former friend, but it ended by Oa was restored by Tom Kalmaku. Kilowog was returned to his normal state, and participated in trying to restore Oa with Jordan, Stewart, Gardner, and Kyle Rayner. The Green Lantern Corps would later battle Parallax, whom was defeated and trapped in the Central Power Battery, and Kilowog was then tasked to train a thousand new recruits.

During the "Blackest Night" storyline, Kilowog encountered a reanimated Ermey, who blamed him for his death for saving Sinestro. Kilowog was forced to battle Ermey and was nearly killed by him, but the Black Lanterns were informed that their rings had reached full power. The Black Lanterns were then tasked to devour the Central Power Battery, and Kilowog gathered with the Green Lanterns to protect it from them. 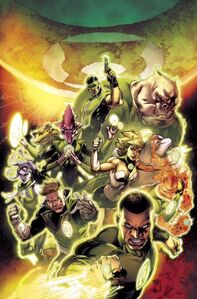 Kilowog with his fellow Green Lanterns. 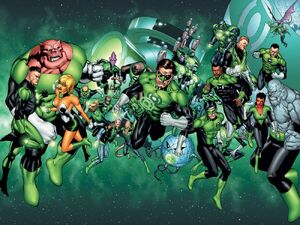 Kilowog with the Green Lantern Corps. 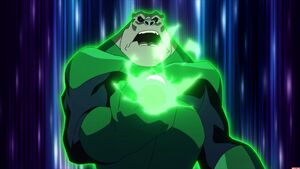 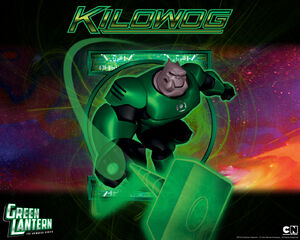