Kung Fu (based on Jeet Kune Do)

Martial Artist
Kim Wu is one of the heroes from the Killer Instinct series.

She was voiced by Abby Trott.

Descendant of the heroes who banished Eyedol and Gargos, Kim Wu is appointed her people's guardian. With the return of Gargos, Kim Wu must fulfill her duty to her homeland and destroy him forever.

Kim Wu is a brave fashion design student and young martial arts teacher born in Chinatown in San Francisco. He is the heir to Yeouiju. She has lived through her mother's family for two thousand years.

In order to fight against Gargos, the dragon appealed to the final position that Kim Wu began to lead the fearless against the demon lord and his servants against the ravaged earth - echoing the heroic courage of her maternal ancestors, this brave combined with Yeouiju. With style, strength, flexibility and the blessing of the dragon, Kim Wu flips in her opponent, kicks and burns, determined to end Gargos' rule in her own way. 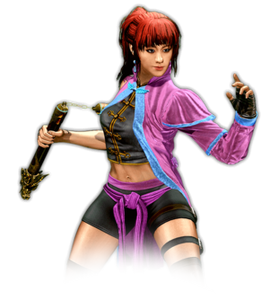