Complete his work and lose his ability to see spirits (formerly), Wait for Yuuko to return

Assistant, Determinator, Scapegoat, Martyr
Kimihiro Watanuki is the main protagonist of the manga/anime series xxxholic, and a minor supporting character in the crossover series Tsubasa: Reservoir Chronicle. He is a teenage boy who has been able to see spirits for as long as he can remember, an ability he is not particularly fond of. His desire to be rid of it leads him to the doorstep of Yuuko Ichihara, a witch who agrees to rid him of his ability in exchange for him working part-time at her shop.

He is voiced by Jun Fukuyama in the Japanese version of the anime and Todd Haberkorn in the English version.

Watanuki has short black hair, and blue/indigo eyes at the beginning of the series. About half way through both the anime and manga however he loses the sight in his right eye to a spider's grudge curse, and as a result, his iris turns a dull gray color. After failing to retrieve the sight, he receives half of Domeki's right eye's sight, which causes his right eye to turn a dark green with a brownish tint (Anime), or gold-brown (Manga). For the majority of the series, he wears an ordinary pair of glasses, however at one point he loses them, and replaces them with a pair that resembles, or may possibly be the pair that Clow Reed wore. Fei Wong Reed once mentioned he resembles a young Clow Reed, and Yuuko Ichihara has also pointed out their similarities.

Watanuki is known for having both a volatile yet caring nature. Depending upon the person he talks to, his emotions tend to be overly exaggerated. When with Himawari he throws himself into the air and squeals "Himawari-chaaaaan!", accompanied by hearts. With Domeki, he almost always expresses irritation with various facial expressions, screaming, and erratic arm motions that remind Himawari of an angry cat, and has great trouble giving him so much as a 'Thank you.' Overtime, he does grow to acknowledge Doumeki as his friend, though he still finds the whole thing unfortunate.

With the exception of these two and Yuuko, who tends to get on his nerves with her childish, bossy attitude and obsession with alcohol, Watanuki tends to address everyone around him with formality and kindness. In the beginning, he is very childish and not very bright, but as the series progresses he becomes more serious. He also gets along better with Doumeki and keeps his distance from Himawari to make sure her bad luck doesn't affect him (until he gives her Tanpopo). All his goofy expressions disappear, he doesn't squeal to Himawari when she appears, and acts friendlier toward Doumeki. He starts to question his own humanity and understands more about the world and his own existence.

Despite his kind nature towards nearly everyone except Doumeki, Watanuki also has a fearsome temper, and is very easily irritated. Much of the comedy in the series comes from his over-the-top yelling and complaining about the crazy things he encounters or is forced to do against his will. Yuuko seems to find this hilarious, and frequently puts him in situations to set him off purely for her own amusement. His temper tones down as he matures over the series, though he still remains easy to annoy.

After Yuko disappears and he takes over the shop, his personality takes a drastic change as he adopts a number of Yuko's mannerisms. He still claims to hate Doumeki and thinks that Mokona is annoying, but is considerably calmer and more mature, evidenced by his acceptance of Himawari's marriage and his understanding of his customers' wishes. He remains hopeful that Yuko will return someday, to the point of insisting that he's only the "temporary" owner of the shop.

At the beginning of the series, Watanuki has the power to see spirits and other things that are invisible for everyone else. He can also feel other people's emotions when they are talking. If they have a negative feeling, Watanuki starts to feel dizzy. If they have a positive feeling, Watanuki feels a calm and cheerful aura. Later in the manga and XxxHolic Kei season, Watanuki and Yuko buy some dreams balloons that allow Watanuki to enter the Dream World and have meetings with Haruka. In xxxHolic Shunmuki Ova, Watanuki follows a path made by Haruka to find five objects that allow him to break the barrier between his world and the Dream World, allowing him to enter when he wants. In the manga, Watanuki wins this ability by himself but he still can´t control the moment to enter. Later in XxxHolic Rou, Watanuki uses the smoke from Yuko's Kiseru to make spells. He can create or break barriers, make a road to find something or someone and travel or send people to other dimensions. He also mentions that he's more powerful inside Dream World. Later, in the last chapter of the manga, Yuko told him through his dream that his powers had grew up enough and he doesn´t need to stay in the shop.

Watanuki has an exceptional cooking skill, although he thinks of it as a hobbie. Yuuko will never get bored waiting for Watanuki's food everyday, though. It´s mentioned by Himawari that Watanuki is good at sports and that he could be on the soccer team. Watanuki never had a part-time job before and he´s not in any clubs, despite that he has many skills.

Watanuki makes an appearance in Blood-C, a twelve episode anime by CLAMP (thus the name Blood-CLAMP).

In episode 7, Watanuki, reveals himself to be the shop owner of a wish granting shop in the body of a dog to the main character Saya. Throughout the anime, since episode 1, the dog has appeared many times and is always around Saya. Even though the dog does not speak, he gives off the feeling that he knows and understands Saya's situation. When he finally speaks to Saya in episode 6, it is not yet known that he is Watanuki, however he is still voiced by Fukuyama Jun in Japenese and Todd Haberkorn in English, who are Watanuki's voice actors in xxxHOLiC. Following on to episode 7 once again, Watanuki tells Saya everything that he can, admitting that he was sent to stay by her side as a result of a wish from one of his customers. Watanuki does not reveal who asked this of him but that he must appear as a dog to Saya until the wish is granted. The full specifications of the wish are not clear at this point either.

He later makes a full apperance in the Blood-C movie, Blood-C The Last Dark. The dog appears to be a proxy that Watanuki uses to speak through, and had appeared on the island in order to give Saya advice. He retains his two differently-colored eye appearance, and serious, but mellow composure. Saya receives a new katana from him, having destroyed her previous one, and Watanuki tells her that she can make the payment after she returns, implying that he wants her to return safely.

Watanuki has also appeared in episode 17 of Kobato., where he receives Baumkuchen from Ginsei.

He hires its two protagonists for a job involving the encounter of a supernatural being. The main characters are both intrigued and suspicious when first meeting Watanuki. However, one most notes that there is a strong sense of loneliness coming from Watatnuki but can't figure out why. 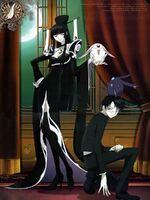 Retrieved from "https://hero.fandom.com/wiki/Kimihiro_Watanuki?oldid=2196604"
Community content is available under CC-BY-SA unless otherwise noted.