Assist Kirby in his missions.

Sidekick
Kine is a character in the Kirby franchies.

He is a sunfish that is best suited for water levels.

Kine is a light blue sunfish, He has white fins and a yellow tail. He has a mouth with yellow lips which were shaped like a circle/ellipse.

In Kirby Triple Deluxe, Kine appears along with Rick and Coo as hazards in the Coo's Forest stage of the sub-game Kirby Fighters (as well as in the downloadable Kirby Fighters Deluxe).

In Kirby: Canvas Curse, Kine appears as one of Paint Roller's drawings.

In Kirby Battle Royale, Kine appears in the audience in the Slam Hockey game.

Kine appears in Super Smash Bros. Ultimate as a advanced-ranked support spirit. His spirit battle is against Squirtle and a blue Kirby where the said Squirtle starts the battle with a freezie on the wuhu island where the player can't swim. 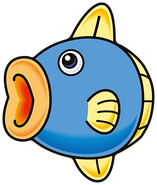 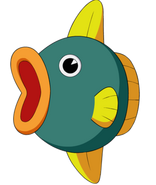 Kine in the anime.