Heroes Wiki
Register
Don't have an account?
Sign In
Advertisement
in: The King of Fighters Heroes, Female, Video Game Heroes,
and 45 more

Be with Ryo forever.
Help Mai, Yuri and other friends.

King is one of the supporting characters in both Art of Fighting series and The King of Fighters franchise. She debuted in the original Art of Fighting as the sole playable female character.

King is a skilled fighter who earned fame early in her career by defeating a famous Muay Thai champ. For various reasons - such as to hide her true identity, to present herself as a reliable fighter, and other issues with her gender - she made efforts to portray herself as a man to defend herself from the dangers of Southtown. Five years before Art of Fighting takes place, she suffers a humiliating defeat when she is found by Jack Turner and his gang. Finding herself poor and patronized by her tormentors, she was forced to work for Mr. Big as a bouncer. Her secret is exposed when she is defeated by Ryo Sakazaki who is searching for his sister Yuri. King agrees to help him save his sister and guides Ryo and Robert to Mr. Big's hideout and is freed from her servitude once he is defeated.

In the following game, she continues her passion for street fighting until her younger brother, Jan, needs an operation to regain the use of his legs. She enters the King of Fighters tournament with hopes to win the prize money. In her ending, she is surprised to see Jan walking on his own two feet. Both Ryo and Robert paid for the operation in gratitude for her help in finding Yuri.

According to Ryo, she is still well by the time Buriki One takes place. Running the Illusion bar, Ryo occasionally stops by to see her and catch up. Since he considers her a "good friend", their relationship probably isn't on the romantic track.

Like all of the Art of Fighting characters to appear in King of Fighters, King's history is largely unchanged, but continues in an alternate continuity (Art of Fighting appears to take place in 1978-1979).

During the series, King acts as the consistent member of the reoccurring Women's Team. She also opens up her own bar in England (and later South Town), the "Illusion", and hires two waitresses named Sally and Elizabeth to assist her. She generally acquiesces to her teammates' whims as she wants to participate to make Jan proud. She agrees to join the Art of Fighting team in The King of Fighters 2000 when Yuri begs her to be her replacement. When Robert doubts her credibility, King is able to prove her worth in an extensive kicking contest. The series also emphasized her possible infatuation with Ryo, which is heavily hinted at in 2000 and The King of Fighters XI. Although she suggested other candidates for her position, King enters the KOF XIII tournament since she doesn't want to lose to the other teams.

King is a young woman with short blonde hair and blue eyes. She wears a dark red suit with a long white sleeved shirt with black fingerless gloves and white shoes and her ears has blue earrings.

King is a kind, trustworthy but violent woman. She is unquestionably loyal to her friends, but relentlessly unforgiving towards her enemies. Although King is a passionate woman, she rarely shows a sensitive side to her friends (and when she does, things just seem to go wrong). She often dresses in men's clothing (although her attire has become more feminine with time) and has a great affinity for fine wine. Though King was once at war with her own sex, she appears to have never been so with her sexuality and she seems to be quite attracted to Ryo Sakazaki. They even have special starting poses to imply this. Yuri and Takuma are aware of King being in love with Ryo, (with Takuma intending to make King Ryo's wife and subsequent mother of Ryo's child to continue the legacy of Kokyugen) so they attempt their best to hook up the pair closer, which ends up producing hilariously unintended consequences.

Although King acts rather masculine at the best of times, traces of femininity can't help but show themselves every now and then. For example, King assumes a very feminine pose during her taunt in which she says C'mon Baby! For her KOF XIII team story, she also wants to a wear a dress for her teams' victory party.

Energy Projectile: King can launch a projectile of energy with her kicks.

Advanced Kicking: King uses a lot of powerful kicks in her moveset.

Billiards: King is a very proficient (maybe even professional) billiards player, in everything from pool to snooker, her favorite sport.

Drink Mixing: King is an expert in coming up with new drinks all the time as she has been working in bars most of her life.

King uses a very distinct Muay Thai. She employs several acrobatic jumping and high kicks which are not used as much by Muay Thai kickboxers. 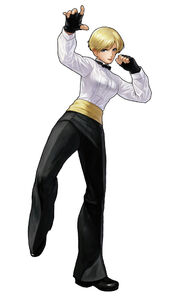 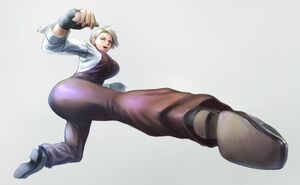