Ruler of the Kingdom of Acorn

Leave the Void and reunite with Sally. (succeeded for a while)

King Acorn is a male British character from the SatAM Sonic cartoon and the Sonic comics. He is the father of Sally Acorn and the former rightfully ruler of Mobotroplis. He was voiced by Tim Curry, who also voiced The Keeper of the Time Stones and voiced Nigel Thornberry in the Wild Thornberries.

King Acorn was the ruler of Mobotroplis until he was betrayed by his ministor Julian Knitobor, who would later become Dr. Robotnik. Before being betrayed, Robotnik helped the King during a time of war. After Robotnik helped the king and his kingdom calm victory during the war Robotnik betrayed King Acorn after he believed that they no needed any weapons or military after the war was over. The King was banished to the Void along with Naugus, not before telling Robotnik that hill will regret it. With the King gone and no defenses, Robotnik took over Mobotroplis, renaming it Robotoropolis and then later on the rest of the planet.

Approximately eleven years after his imprisonment in the Void, Ixis Naugus took the form of a sick King so that Sonic, who had arrived in the Void with Sally and Bunnie Rabbot, would free him from the Void. After Sonic saved the false King, the real King arrived with Ari the Ram and greeted Sally, who threw herself into his arms, crying. Later, Sonic saved the King, Sally, Bunnie and Ari from the Void. The King was free again, but not for long. It turned out that his body had begun to crystallize due to him having been too long in the Void, and the only way he could save himself from becoming a lifeless crystal statue was to return to the Void with Naugus. Knowing that he had to leave, the King told a saddened Sally to take the list of all the Freedom Fighter groups from his pocket. After she had done so, the King said good-bye to his daughter and returned to the Void with Naugus.

The King's history was later slightly altered when Sonic and Sally went back in time with the Time Stones to stop Dr. Robotnik before he rose to power. In the past, after the King had dismissed Julian, Sir Charles Hedgehog asked him for an audience. Although he heard from him that Julian was plotting against him, he did not believe Charles' story at first. However, he then met the Sonic and Sally from the future, and he recognized his daughter after taking notice of her appearance, her royal signet ring, and her familiarity with the family creed. Just as the King started to believe their warning however, Dr. Robotnik's forces surrounded the palace and all who were inside. The king was subsequently dethroned and captured, but Sonic and Sally managed to escape. Later, the King was exiled to the Void by Robotnik, like in the original timeline.

In the episode Drood Henge, the voice of the King appeared, which came from the message he recorded about the Deep Power Stones, which was played by Nicole.

King Acorn is an anthropomorphic squirrel with brown-cream fur and light blue eyes. He has a long tail, and brown eyebrows and mustaches. He wears a golden crown with an ornament in the form of red feathers. He also wears a blue military uniform with gold epaulettes, a red and gold medal and sleeve, and black boots. 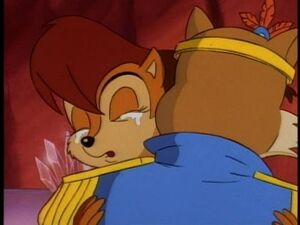 King Acorn hugging a crying Sally into his arms in The Void. 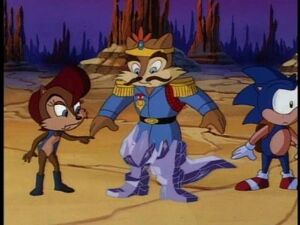 King Acorn noticing his body turning to crystal after being in The Void for too long. 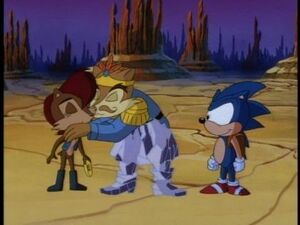 King Acorn kisses his daughter good bye before returning to The Void. 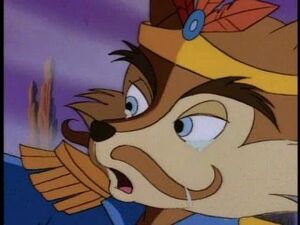 King Acorn looks back at Sally one last time in tears before returning to The Void. 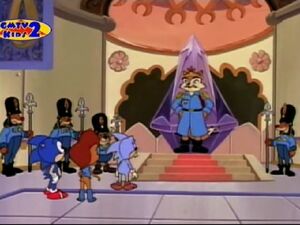 King Acorn with present day Sonic and Sally and Uncle Chuck in the throne room in Blast to the Past, Part 1. 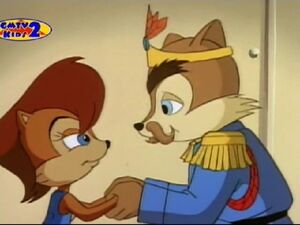 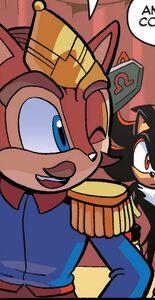 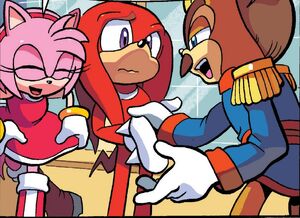 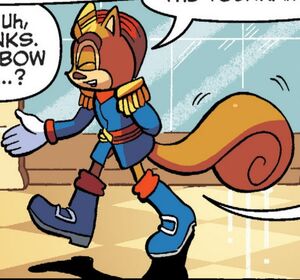 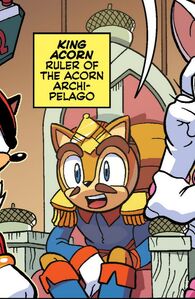 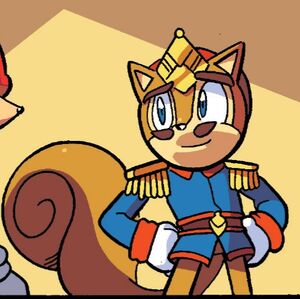 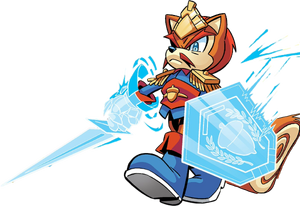