To win the heart of Princess Guinevere

He is loosely based on the legendary figure King Arthur.

He was voiced by the late Rik Mayall (who also played Rick in The Young Ones, Richie in Bottom and Mr. Toad in the 1995 adaptation of The Wind in the Willows and it's 1996 sequel The Willows in Winter).

Arthur is the King of England and is in love with Princess Guinevere and wishes to make her his wife. Arthur would visit Guinevere at her tower where she would request something she desired and in return, she would marry Arthur.

Afterwards, Arthur would go to his wizard servant Merlin on how to find what Guinevere wanted. Merlin would then warn Arthur of the dangers he would face on this quest.

Arthur would then travel on his horse Alan to get what Guinevere wanted, but then something happens which ruins the quest and causes Guinevere to become displeased.

Arthur has an older sister named Lady M who lives in France. Unbeknownst to Arthur, Lady M is also a knight known as Sir Margaret.

Arthur has two rebellious knights named Sir Lancelot and Sir Martyn, who wish to overthrow Arthur as King. Arthur's only loyal knight is a large man called Splag, who can only talk in grunts.

Arthur has a rivalry with Robin Hood and his merry men. 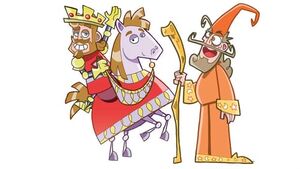 Arthur with Alan and Merlin 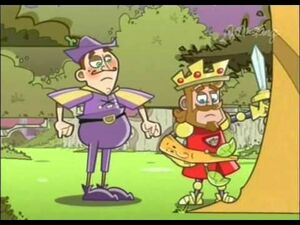 Arthur and Robin Hood
Add a photo to this gallery
Retrieved from "https://hero.fandom.com/wiki/King_Arthur_(King_Arthur%27s_Disasters)?oldid=1662839"
Community content is available under CC-BY-SA unless otherwise noted.