King of Omashu, a high-ranking member of Order of the White Lotus

To liberate the city of Omashu and Ba Sing Se from the Fire Nation's tyranny. (succeeded)

King Bumi is a supporting character in the show Avatar: The Last Airbender. He is a lifelong childhood friend of Aang shortly before Fire Lord Sozin started the war and in later years he became the king of his hometown called Omashu.

Bumi was born and raised in the city of Omashu. As a child, he became close friends with Aang, showing him how to use the Omashu delivery system as "the world's greatest super slide", which caused the young airbender to label Bumi as a "mad genius". The two kids also used to play in the Omashu sewer system.

Sometime later in his life, Bumi was crowned King of Omashu.

In the Water Tribe saga, not long after Aang was released from the iceberg by Katara and Sokka, they visit Omashu (though Aang was unaware that Bumi was still alive at first) and unintentionally cause trouble there which led to one of the Earth Kingdom guards to take Aang and his friends straight to King Bumi. Bumi (now old aged) was surprised that Aang was still a kid upon first glance at him when his guards brought them in for sentencing. Rather than punishing them he threw them "a feast" and had a conversation, Aang lies about his real identity but King Bumi figures out he's the Avatar and forces him to stay in his castle to do three deadly challenges and keeping Katara and Sokka hostage by trapping them in a rock called jennamite.

Aang completes the first two tasks, and when it comes to the third challange, he has to pick someone to fight. Trying to act clever, the Avatar selects the King instead of his other warriors. However, the elderly monarch takes off his robe to reveal himself as an incredibly powerful earthbender with a six pack who towers over him instead of a frail and stooped old man. The two battle, and after they finish in a draw, the King asks Aang one last thing: his name. Aang realizes that the King is his old friend, Bumi, and the two embrace. Bumi shatters the crystal encasing Sokka and Katara, and eats a piece, revealing that jennamite is made from rock candy. Sokka and Katara are surprised to learn that the king is actually Aang's old friend and question Bumi on why he made Aang do all those challenges instead of just telling him who he really was. Bumi explains that, aside from finding it fun to mess with people, as the Avatar, Aang has a difficult task to restore balance to the world by defeating Fire Lord Ozai. With how much the world has changed in the hundred years that he had been gone, Aang still has much to learn, and Bumi hopes that when he does, he will think "like a mad genius". Aang thanks Bumi for all he has done and challenges the king in return. The two of them go sliding down the Omashu delivery system like they used to do a century prior, which results in them crashing into the cabbage merchant's cart, just like Team Avatar did before.

In the Earth Kingdom saga, Aang and his friends returned to Omashu so Aang can learn earthbending from King Bumi. Unfortunately, it was attacked and held captive by the Fire Nation. Aang is told by the rebellion that on the day the Fire Nation attacked Bumi surrendered. Aang tries to free Bumi, and rides his metal coffin down the mail system with Princess Azula in hot pursuit. Bumi uses his head to create a large boulder, destroying the cart Azula used to pursue them. Now brought to safety, Aang questions Bumi on why he surrendered. Bumi responds to him that he was waiting for the right moment to strike back, which was why he could not leave. He also informs Aang that he needed to find an earthbending teacher who waited and listened before striking, and that it could not be him. He bids Aang farewell and leaves.

Later in the Fire Nation saga, Bumi spent several weeks imprisoned in his city, waiting for the right moment to escape, which came on the Day of Black Sun, where he broke out of his prison by earthbending with his face. Taking advantage of the firebenders' loss of power, he single-handedly liberated Omashu and destroyed Ozai's statue at the top of the city, sending it sliding down and off the edge of the city, before laughing and taking a bite of jennamite, retaking his city in mere minutes.

Bumi is also revealed to be part of a secret society called the Order of the White Lotus when Team Avatar (minus Aang and Momo) was looking for Iroh. He participates in the Order's successful liberation of Ba Sing Se in the name of the Earth Kingdom, using impressive displays of his earthbending to destroy many Fire Nation tanks, in one instance by stacking them on top of each other.

Like many of the original Avatar characters, King Bumi died of natural causes long before The Legend of Korra.

Aang and Katara later named their first son after Bumi.

Bumi was the wild-eyed, eccentric, elderly King of Omashu. As a child, Bumi had been a close friend of Avatar Aang and he remained Aang's only friend from before the Hundred Year War to be confirmed as still alive. He became an old and wild man, prone to cackling and snorting laughter at unfunny jokes. Despite his supercentenarian age and his apparent frailty, Bumi was an earthbending master and quite fit for his old age, at one point claiming himself to be "the most powerful earthbender [anyone] will ever see".

Bumi's eccentricity arose out of the fact that he always kept his mind "open to the possibilities". As a child, Bumi decided to use the Omashu delivery system as a chute ride, for which Aang dubbed him "a mad genius", a name that Bumi seemed to appreciate. Although Bumi appeared senile, he was in fact a brilliant and patient tactician, willing to wait until the opportune moment to strike in order to produce the most favorable outcome. Bumi carried himself with the same composure during a quiet, peaceful meal as he did when his city was under attack and he rarely explained his actions, which tended to infuriate his subordinates.

Despite his supercentenarian age, King Bumi was a master earthbender who was one of, if not the best in the world. His style was very conservative and stressed waiting for exactly the right moment to strike; however, when said moment did come, he demonstrated extremely powerful techniques. Bumi could levitate entire houses, extremely large pieces of stone, create fissures with kicks into the ground, turn ordinary dirt into quicksand, quickly tunnel through the ground, and, most extraordinarily, earthbend exclusively with his face with little-to-no handicap, as seen in the episode Sozin's Comet part 2: The Old Masters during the Day of Black Sun to break free from his prison. With rock pillars, Bumi could launch himself or heavy metal objects such as tanks into the air, and once toppled a large metal statue from underneath. Bumi could also bend jennamite. Likewise, he was highly agile, able to reach considerable distances with a single jump, propelling himself with his earthbending. Bumi may have seismic sense like Toph as he earth-bent several Fire Nation soldiers completely without looking. 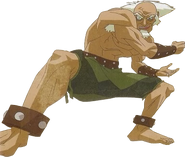 King Bumi about to earthbend 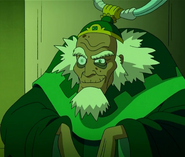 Bumi faced off against Aang in the final task he had for the Avatar.

Before parting with his old friend, Bumi relived old memories with Aang by riding down the Omashu delivery system.

Wishing to remain a prisoner, Bumi told Aang he must find another earthbending instructor.

Bumi and his friends going to the Order of the White Lotus' camp.

King Bumi adding his own personal touches to the Ozai statue while liberating Omashu.