Important Note: This article is ONLY for the HEROIC King Ghidorah from Godzilla, Mothra and King Ghidorah: Giant Monsters All-Out Attack, NOT his villainous incarnations in the rest of his appearances.

Protecting the nation of Japan.

Defeat Godzilla and save Japan (failed).

Though he is usually portrayed as the franchise' main antagonist and a member of a chinese dragon-like alien race called Ghidorah, this version of King Ghidorah played a more heroic role and is actually an immature form of Yamata-no-Orochi, the legendary 8-headed dragonic serpent (or dragon to say in the least). After his defeat in combat with honorable Japanese warriors in the past, he, along with fellow Guardian Monsters Baragon and Mothra was destined to be reincarnated while carrying souls of deceased honorable Japanese people to protect Japan from attack by restless souls of victims of the Pacific War whom possessed and reanimated the remains of the Godzilla who attacked Japan in 1954.

Unlike his villainous extraterrestrial incarnations, this Ghidorah is a form of Yamata-no-Orochi, the God of the Sky and one of the three Guardian Monsters, along with Mothra and Baragon. He was slain by ancient Japanese warriors and laid to rest in the forests around Mount Fuji, with the warriors praying for his soul so that he would rise again one day to defend Japan. But he died when fighting an pure white eyed Godzilla.

Since King Ghidorah is stated to be Yamata-no-Orochi itself, his true form is arguably similar to traditional depictions of King Ghidorah, but has 8 heads and 8 tails.

In his current form as King Ghidorah, he looked like a golden dragon monster with two legs, three heads on long necks, giant bat-like wings, and two tails. Reasons why he had an appearance similar to his villainous counterpart was due to him being summoned prematurely.

Ghidorah is one of the three legendary guardians of the Japanese isles. When Godzilla attacks Japan, Ghidorah, Mothra, and Baragon, aided by the Japan Self-Defense Force, fought him. All three are presumably killed, but their spirits entered Godzilla, stunning him long enough for General Tachibana to burrow out of Godzilla after initially firing a D-03 missile. This destroyed Godzilla when he tried to use his atomic rays after it burst out of the inflicted hole, vaporizing Godzilla from within. 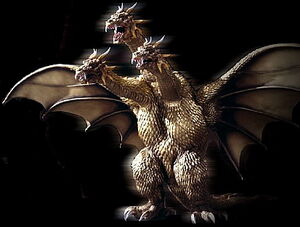 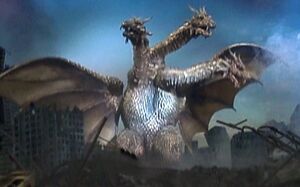 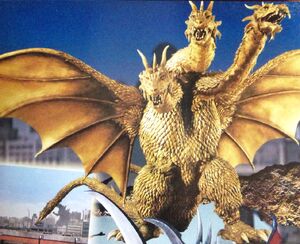