King Gristle (formerly known as Prince Gristle) or simply Gristle is the son of King Gristle Sr., the love interest and later boyfriend of Bridget and a major protagonist in DreamWorks' 2016 movie Trolls.

He is voiced by Christopher Mintz-Plasse, who previously voiced Fishlegs Ingerman in How to Train your Dragon, Fogell in Superbad and Alvin in ParaNorman.

Prince Gristle is first seen as a child waking up his father on the day of Trollstice (the one day Bergens feel happy by eating Trolls), which will mark the first time the prince has eaten a Troll. The Troll chosen to be given to Gristle as his first Troll is the Trolls' princess Poppy. However, Poppy and the other Trolls led by Poppy's father King Peppy, have escaped and replaced themselves with decoys. Angered by this, King Gristle Sr. blames the Trolls' escape on the Bergens' head cook Chef and banishes her from Bergentown. Later that night, Gristle complains about not getting to eat a Troll, before asking his father what will make him happy now. The saddened King picks up his son and tells absolutely nothing will make him happy and he will never feel happy, much to the sadness of Gristle and the young scullery maid Bridget (who has feelings for the prince).

Twenty years later, a now adult Gristle is now King after his father was dethroned, (according to his profile on the Trolls website) and is unaware of Bridget's crush on him. When Chef returns to Bergentown, the young King is quick to remind her that his father banished her and that it's her fault that he didn't get to eat a Troll. Chef is able to convince the King to let her return to her former position by revealing that she captured Trolls. Chef gives Gristle a Troll named Creek to eat and appears to do so.

When Bridget is disguised as "Lady Glittersparkles" with Poppy's help, he first sees her as "total honesty on the total babe" and falls in love with her. At the pizza arcade palace, they go on the date. After she slaps his hand and eat a pizza loud in front of him, he calls her "fantastic". During the date, Gristle invites "Lady Glittersparkles" to be his plus one at Trollstice. Poppy and the other Trolls also discover that Creek wasn't eaten at all and is instead inside the jewel on the King's robes. When Bridget leaves after Chef arrive Gristle found one of her roller skates on the stairs and kept it. Gristle is later seen exercising in his room, unaware that Poppy and the other Trolls have snuck in and stolen the jewel to free Creek.

Whilst Bridget helps free the Trolls before they are served to the other Bergens (after Creek betrays the Trolls to Chef to save himself from being eaten), Gristle is at the Trollstice event and wonders were "Lady Glittersparkles" is, but Chef tells him to carry on Trollstice without her. Later Poppy reveals to Gristle that Bridget was Lady Glittersparkles and that Bergens don't need to eat Trolls to be happy as the King felt happy on his date. Agreeing with Poppy, the King and the other Bergens make peace with the Trolls. The King is last seen with Bridget and the other Bergens and Trolls dancing after Chef and Creek are banished from Bergentown.

Gristle has light green skin, red eyes, pointy ears and dark green hair. His attire consists of a red and white striped t-shirt (which is too small for him), blue shorts, white socks, yellow sandals, a white fur trimmed red clock with a green jewel and a gold crown.

Chef trying to convince the now King Gristle into letting her return to Bergentown.

Gristle about to "eat" Creek. 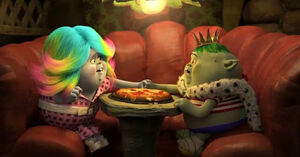 Gristle after learning that Bridget was Lady Glittersparkles

Chef trying to get Gristle to eat Branch.

Gristle dancing with Bridget, Poppy, Branch and the other Bergens 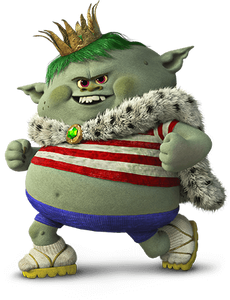