The King of Hyrule, The King

King Harkinian, commonly known as the King of Hyrule or just the King, is Zelda's father from Zelda CD-i, he is king of Hyrule also appeared in YouTube movie, but now he appeared in Zelda CD-i also helped his daughter and Link on their adventures.

He is a recurring character in various non-canonical Legend of Zelda products. He is the King of Hyrule and head of the Royal Family of Hyrule.

King Harkinian is a popular inclusion in "YouTube Poop" (Parodies/Edits) videos on YouTube, and many of his lines from Link: The Faces of Evil and Zelda: The Wand of Gamelon, such as "My boy" (infamously pronounced "Mai Boi" and "dinner," are particularly popular in these videos.

Link: The Faces of Evil

King Harkinian appears in the beginning and ending FMVs in the game. Prior to receiving Gwonam's prophecy, he explains to Link, who is bored due to the absence of any battles, that "this peace is what all true warriors strive for".

Zelda: The Wand of Gamelon

In the introduction sequence, Harkinian travels to Hyrule to help his cousin, Duke Onkled, whose lands of Gamelon are being attacked by the evil forces of Ganon. After a month of absence, Link goes to Gamelon to help the King, complying to his request when he left. After another month, when both Link and King Harkinian have not sent word, Princess Zelda, Harkinian's daughter, decides to go to Gamelon to find Link and her father.

It is later revealed that Onkled betrayed his cousin and had him imprisoned and sided with Ganon in exchange of power. Link was sealed into a mirror by Ganon with the use of magic. Zelda then manages to free both her father and Link, and Onkled is made to "scrub all the floors in Hyrule".

King Harkinian is the king of Hyrule. The father of Princess Zelda, he is close with Queen Seline of Calatia and he greatly trusts Link. 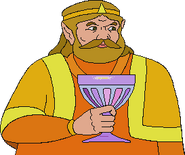 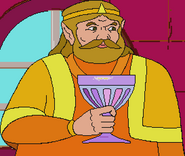 King Harkinian in Link: The Faces of Evil.