Get rid of Shrek and have Princess Fiona be with Prince Charming (formerly).

He is voiced by John Cleese who also played Jean-Bob and Ape.

King Harold makes his debut in Shrek 2. When his daughter Fiona arrives at the castle with her new husband, he is unpleasantly surprised that they are both ogres. King Harold had secretly made a promise to the Fairy Godmother that her son Prince Charming would marry Fiona. King Harold hires Puss in Boots to assassinate Shrek. King Harold then succumbs to guilt when Fiona finds out that Shrek is not around.

Harold at first refuses when the Fairy Godmother asks him to give the love potion to Fiona that will cause her to fall in love with Prince Charming, because he recoils from this invasion of her free will, but he is forced to acquiesce by some dark threat of disclosure; in the event, when Fiona states that she loved the old Shrek (rather the 'new' one that Prince Charming is pretending to be), Harold swaps the cup which contains the potion for his own.

Afterwards, the king emerges from his suit of armor, now reverted to his original frog prince form by the blast. The wife seems not at all unhappy about this turn of events. After this, he apologizes to Shrek and accepts him into the family, his wife saying that he is more of a man for accepting Shrek and Fiona's marriage than he ever was when he was actually human.

King Harold makes a minor appearance in the third film in his water lily bed. Shrek does not want his father-in-law's crown; aside from not willing to give up his beloved swamp, he also doesn't think he's qualified enough to be a king. With his dying breath, Harold gives Shrek the name of the other possible heir: Fiona's cousin Artie. He then passes on, with everyone attending his funeral.

Harold and Lillian make a flashback cameo trying to wager a deal with Rumplestilskin (who wanted Harold's crown so he could so he could rule Far Far Away). At the last instant, the king and queen are informed that Shrek had saved Fiona from the keep; rendering Rumpel's deal pointless. 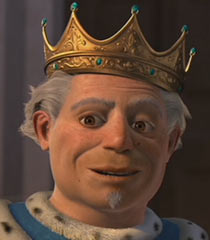 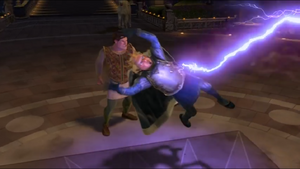 Harold's death, as he passes away from his illness.
Add a photo to this gallery

Retrieved from "https://hero.fandom.com/wiki/King_Harold_Pendragon?oldid=1986091"
Community content is available under CC-BY-SA unless otherwise noted.