Heroes Wiki
Register
Don't have an account?
Sign In
Advertisement
in: Articles under construction, Cleanup, Male,
and 48 more

King of the Primates

Fighting other monsters such as Godzilla

Save Earth from certain threats such as Godzilla

In the first 2 movies he was portrayed by the late Haruo Nakajima.

In the Showa series, this King Kong is a gigantic ape that resides in the jungles of the remote Faro Island, living behind a huge wall constructed by the native humans. The natives worship Kong as their mighty giant demon god, and frequently pray to him and prepare offerings of Farolacton juice.

King Kong was discovered by an expedition to Faro Island, which was sent there by Mr. Tako, marketing executive for Pacific Pharmaceuticals, in order to find a legendary monster worshiped by the natives. The expedition only heard Kong's roar from the mountains, but saw the beast himself when he battled a Giant Octopus that attacked a village on the island. After chasing the octopus off, Kong began to drink jugs of the Farolacton berry juice that the natives had prepared, and fell asleep. The expedition members had Kong tied to a raft and taken back to Japan to be used as publicity for the company, but their boat was stopped by the Japanese Coast Guard, who informed Tako that he would be liable for any damage caused by Kong in Japan. Suddenly, Kong began to stir and try to break free of the raft. The crew members opened fire on the dynamite attached to the raft, causing it to explode. Kong emerged from the water unharmed, and swam to the Japanese mainland. Kong rampaged along the coastline until he encountered Godzilla in the wilderness. Kong tossed a boulder at Godzilla, who responded with a blast of his thermonuclear breath, which singed Kong's fur and set much of the forest ablaze. Kong scratched his head and walked away in defeat.

Later, Kong arrived in Tokyo and easily passed the electrical barrier that had been used to repel Godzilla earlier, actually drawing strength from the electrical currents. Kong smashed several buildings in his path and grabbed a train, and while looking inside was smitten with Fumiko Sakurai. Kong grabbed Fumiko and dropped the train, then climbed to the top of the National Diet Building. The JSDF surrounded the building and loaded rockets with the Farolacton berry juice while playing a recording of the Faro Islanders' chant, hoping to lull Kong back to sleep. After a few minutes, Kong fell unconscious and slid off the building, allowing the JSDF to rescue Fumiko. The JSDF then formed a desperate plan: bring Kong to Mount Fuji so he can fight Godzilla and the two monsters will destroy each other. Kong was tied to several large balloons with indestructible metal wire and carried to Mt. Fuji. Kong was dropped onto Godzilla, and the two titans resumed their battle. Godzilla again claimed the upper hand, eventually battering Kong into unconsciousness and razing him with his atomic breath. Luckily for Kong, a lightning storm passed over head and Kong was struck by lightning, re-energizing him and surging an electrical current through his body. Kong grabbed Godzilla's tail, electrocuting him with his touch, and the battle raged on, this time with both combatants on equal footing. The monsters fought across the Fuji wilderness until they reached Atami Castle, which they destroyed before tackling each other into the ocean below, causing an earthquake. After the tremors settled, Kong emerged from Sagami Bay, with Godzilla nowhere in sight, and began to swim back to his home on Faro Island.

Commander Carl Nelson of the United Nations spent years studying the mythic Kong, even creating anatomical drawings of him and blueprints for a robotic version of the giant ape. When the Explorer, a UN submarine under Nelson's command, sustained damage in the Java Sea and was forced to surface, Nelson decided to go ashore on the nearby Mondo Island, held to be the home of Kong. Accompanied by Lieutenant Commander Jiro Nomura and Lieutenant Susan Watson, Nelson traveled to the island aboard a Hover Car. Upon disembarking, the trio were accosted by an old native man, who warned that they were trespassing on the domain of "King Kong." Nelson and Nomura went after the old man to question him, leaving Susan behind with the Hover Car. The gigantic dinosaur Gorosaurus emerged from the jungle and menaced Susan, but her screams caught the attention of Kong, who came to her rescue. Kong was instantly smitten with Susan, taking her in his hand and admiring her before setting her down atop a nearby tree. Kong battled with Gorosaurus, seemingly defeating him by pummeling him with his fists. Kong grabbed Susan again, who pleaded with him to set her down. Kong complied, and Susan reunited with her comrades. Suddenly, Gorosaurus stirred back to life and clamped his jaws onto Kong's legs. Despite Susan's protests, Nelson and the others headed back for the Explorer aboard the Hover Car, leaving Kong to contend with the dinosaur. Kong managed to defeat Gorosaurus by prying apart his jaws and breaking them, then ran after the Hover Car. A Giant Sea Serpent surfaced from the ocean and attacked the Hover Car, but Kong saved the craft by throwing a boulder at the serpent. Kong ran into the water and grappled with the serpent, while soldiers aboard the Explorer opened fire on both kaiju. Nelson ordered the men to stop firing, allowing Kong to dispatch his enemy without trouble. Nelson and the others boarded the Explorer, which had still not finished repairs. Kong began shaking the submarine, prompting Susan to go above deck and try to calm him down. Kong grabbed Susan in his hand, forcing her to jump into the sea to try and swim back to the sub. Kong panicked and grabbed Susan again, then finally placed her back on the sub. Susan thanked Kong and went below deck. Kong sat lonesomely on the shore of the island as the Explorer departed.

Nelson and the others spoke about their adventure at the United Nations in New York City, causing a sensation. When the mad scientist Dr. Who learned of this, he schemed to kidnap Kong so he could mine the radioactive Element X for him, after the robotic Mechani-Kong built from Nelson's stolen blueprints failed to resist the radiation. Who sent a fleet of helicopters to Mondo and began dropping ether bombs onto Kong, causing the gigantic ape to collapse and fall asleep. Who's men attached restraints to Kong's wrists and ankles and airlifted him to Who's ship. Kong was then brought to Who's Arctic base and hypnotized so that he could be forced to mine for Element X. However, as he was digging for the material, Kong broke free of Who's hypnosis and tried to escape. Who dropped a giant metal door in front of Kong, trapping him. Who was forced to move on to his second plan to control Kong. He had Nelson, Nomura, and Susan brought to his base and held prisoner. He stated he would free them if Susan helped him control Kong, but she refused. Kong began breaking free of the door sealing him, causing Who's base to sustain damage. Kong finally escaped and jumped into the sea, evading Mechani-Kong's pursuit. Undeterred, Who pursued Kong in his ship, bringing Mechani-Kong along with him. When Kong came ashore near Tokyo, Who planned to send his robot to subdue him. Unwilling to allow thousands to die in the inevitable battle between the two Kongs, Who's benefactor Madame Piranha set Nelson and the others free. The trio reached Tokyo and convinced the JSDF not to attack Kong. Susan then ran to Kong to calm him down. Kong picked Susan up again, but their reunion was interrupted when Mechani-Kong smashed through a nearby building.

Kong set Susan down and prepared to battle his mechanical double. Kong and the robot exchanged blows, with Mechani-Kong managing to knock its organic counterpart down. Who ordered the robot to grab Susan and scale the Tokyo Tower. Kong pursued his double, which broadcast Who's voice from loudspeakers in its mouth. Who demanded that Kong return to his ship, or else he would drop Susan. Kong refused to comply and continued pursuing Mechani-Kong as it climbed higher and higher. Mechani-kong finally dropped Susan, but Kong caught her and set her down safely on the tower. Kong continued chasing after Mechani-Kong, which kicked and punched him as it neared the summit of the tower. In a final act, Madame Piranha destroyed Mechani-Kong's controls aboard the ship before Dr. Who fatally shot her, causing the robot to fall from the tower and break apart into pieces as it collided with the street below. Nelson, Nomura, Susan, Kong, and the JSDF headed after Dr. Who's ship, which began to flee from Tokyo Bay. Susan told Kong to stop the ship, and the beast promptly dove into the bay. Kong grabbed onto the ship and began smashing it with his fists, causing it to take on water and sink and killing Dr. Who in the process. Susan called out after Kong as he began heading out to sea, but Nelson told her to let him go, as he had likely had enough of civilization.

While still incredibly destructive and aggressive, Kong is portrayed as being somewhat more sympathetic than Godzilla. Kong seems to be mostly content living on Faro Island, staying behind the huge wall constructed by the islanders in exchange for the Farolacton juice and worship they provide him. Kong acts as an unintentional defender of the native populace as well, fending off the Giant Octopus when it comes ashore in the village. Kong takes an interest in the human woman Fumiko Sakurai, abducting her from a train while wandering through Tokyo and climbing with her to the top of the National Diet Building. Kong seems to be less aggressive than Godzilla, retreating promptly from their first battle and hiding from Godzilla for a large portion of their second battle. Kong never intentionally causes destruction except when attacking Dr. Who's base or ship, and is generally not hostile towards humans. Kong is infatuated with Susan Watson, and will go to great lengths to protect her and respond to her commands. 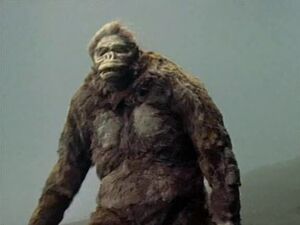 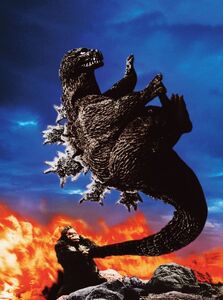 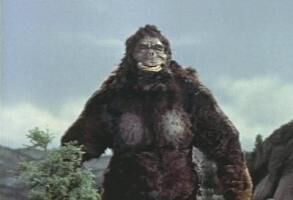 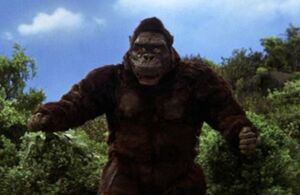 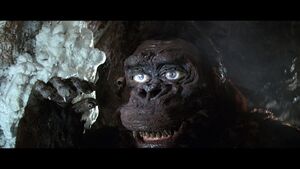