God and Supreme Ruler of the Sea
Cook

Being dispotic with sea creatures (formerly)

Being comprehensive with sea creatures (currently)

To dominate the sea with an iron fist (formerly)

To dominate the sea with love and comprehension (currently)

He is portrayed by Kevin Michael Richardson in real life, who also voiced Maurice and Cleveland Brown Jr.

In the film, he is voiced by Jeffrey Tambor, who also portrays Augustus Maywho.

In the television show, he was voiced by Family Feud host, John O'Hurley.

Neptune is the god and supreme ruler of the sea, which makes him enemies with the Flying Dutchman. His name is often used in place of God's, with phrases such as "Dear Neptune", "Neptune preserve her!" and "Oh my Neptune!". But he has never explicitly been shown to be worshiped by the creatures of the sea. Neptune's first appearance were in the episode "Neptune's Spatula", and reappeared in The SpongeBob SquarePants Movie, but revealed he was bald after event of SpongeBob Season 4. Later, reappeared again before his hair was restored from Neptune's Spatula appeared in Clash of The Triton. Neptune is voiced by John O'Hurley in the TV series, and by Jeffrey Tambor in the movie. His Greek counterpart is Poseidon and also has a wife, 1 son and 2 daughters.

In the episode "Neptune's Spatula", Neptune appeared after Spongebob pulled the Golden Spatula from the ancient grease, making him Neptune's royal fry cook. However, Neptune refused to accept such a lowly creature such as SpongeBob as the chosen one and challenged him to a cook-off where, if SpongeBob won, he would become a god in Atlantis, but if he lost, he must gave up fry cooking forever. The challenge was held at the "Poseidome", where the first one to make 1,000 patties won. Using his godlike powers, Neptune won the challenge just as SpongeBob finished his first patty. To celebrate his victory, he gave the patties to the audience, who hated it. Neptune then tasted SpongeBob's patty, and loved it. He declared SpongeBob the winner and made him a god. However, when SpongeBob learnt that his friends couldn't join him in Atlantis, he did not want to go and instead, made Neptune his "trainee" at the Krusty Krab. In this episode, Neptune was green and had fairly realistic human features, had hair, a mustache, a beard, thick fingers, was very muscular, and had a different crown. This version of Neptune also appeared in videogame Battle for Bikini Bottom, where he summoned SpongeBob and Patrick to the Poseidome to defeat a robot version of Sandy Cheeks.

In the live-action Patchy the Pirate segment of "Party Pooper Pants", a live-action version of Neptune was at Patchy's party.

Neptune plays a central part in The SpongeBob SquarePants Movie. The movie also introduces Neptune's daughter, Princess Mindy. In the movie, Neptune is bald, has brigher green-skin, has a larger nose, and a different beard. He is also explicitly portrayed as a king rather than a god and lives in some sort of sand castle just outside of Bikini Bottom somewhere in Atlantis. Neptune is very cruel, brutish, and tyrannical, which he tells his daughter is necessary for him to be respected ruler. Neptune is shown to be a ruthless and unfair deity who rules over the sea with an iron fist and making his citizens suffer constant harsh punishments (including sending his servant 20 years in the dungeon for touching his crown, even though it's his job to polish the crown). His crown is very important to him, not only because it is a symbol of his power, but because it covers his "thinning" (bald) head. When the crown is stolen by Plankton, Neptune attempts to execute Mr. Krabs, who is framed for the crime with the only evidence being a fake note saying he did it and a phone call by Plankton saying he took it to Shell City. When SpongeBob refuses to let him kill his boss,he threatens to fry him along with his boss until Mindy arrived and convinced her father to let him go to Shell City and get his crown back,leading to Neptune to angrily order SpongeBob to return with the crown in 6 days(which was originally 10 until Patrick argued it down to 6) and freezes Mr. Krabs, as he will keep him that way until the day of execution. He spends the rest of the movie dealing with his bald spot (as shown through Mindy's magical clam) while Bikini Bottom has been taken over by Plankton and Neptune doesn't even care. He then realizes the error of his ways at the end of the movie when he nearly kills Krabs after he magically locks his daughter out of the restaurant for stalling him, before SpongeBob and Patrick arrived with his crown before he does so. Happily reunited with his crown and praising SpongeBob for his heroic deed, he finally takes Mindy's advice of being a loving and compassionate ruler and apologizes to Mr. Krabs for freezing him.

In "SpongeHenge", Shubie Fishbowl denied Neptune's existence when an anchovy told her that Neptune must be mad, saying, "Everyone knows Poseidon is the ruler of the undersea."

Judging by his different appearances, it is reasonable to conclude that Neptune is actually various different characters, with the first one referring to the Roman deity of the same name, and while a second one works as the actual King of SpongeBob's underwater world. Their different places of living, the fact that the King didn't already know SpongeBob, and his daughter Princess Mindy only being in the movie reinforces this theory. There is also the fact that in "Krusty Towers" Squidward sayd "King Neptune XIV would be nice." Which claimed that the three versions of Neptune throughout the series were not the same character and instead could just be different monarchs of the royal family and were probably related.

Another possible explanation is that he had gotten older from the show to the movie resulting in his loss of hair, because Stephen Hindenburg did establish that the movie took place after the series. However this was hard to say seeing as The movie took place 36 years after the pilot episode (because of SpongeBob's 374 straight employee of the month awards), and so far Neptune (from Neptune's Spatula) had been relieved to have been around for 5000 years, meaning that 36 years (or less as his 5000th birthday took place after SpongeBob got his job) probably wouldn't age him that much. Plus there is the fact that he is a god (hence immortality) so he might not age at all once he reached a certain age point. 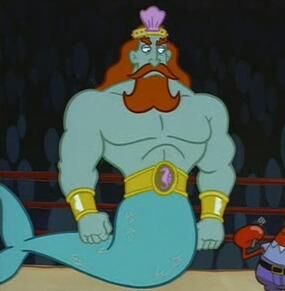 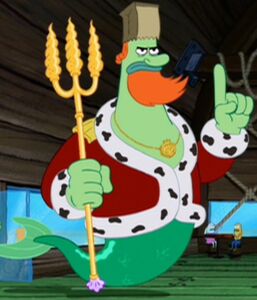