To protect Hyrule from the Great Calamity (failed in BOTW, succeeded in HW: AoC)

King Rhoam Bosphoramus Hyrule, also known as King Rhoam is the king of the kingdom of Hyrule and is the husband of the late queen of Hyrule and Princess Zelda's father. He was devoted to keeping the Great Calamity from bringing down Hyrule at any cost, while consistently reminding his daughter of her duties of awakening her power, something which caused Zelda much turmoil, especially without her mother to guide her in the right direction to do so.

While he was dismissive towards her for the most part, including scolding her for researching ancient technology, he eventually realized that what he was doing and opt to encourage her instead, when she came back, but the Great Calamity began and the Champions, some of his people, as well as himself were all killed in the process. Rhoam, now a spirit headed for the Great Plateau where Link was recuperating in the Shrine of Resurrection after Zelda had awakened her power and sealed Calamity Ganon and herself away. He reappears in Hyrule Warriors: Age of Calamity.

King Rhoam awaited 100 years for Link to emerge from the Shrine of Resurrection, dressed as an ordinary old man. When Link finally does, he has no memory of his past, and Link meets him. The disguised king was disappointed to learn that Link had lost all of his memories, but was willing to guide him and teach him how to survive the Great Plateau. After Link places the Sheikah Slate on the Guidance Stone, it causes the Sheikah Towers across Hyrule to rise and restore power to the Sheikah Shrines as well. Link sees Calamity Ganon trying to escape from the seal, only to be quickly held back by Princess Zelda.

Rhoam uses the Paraglider to meet up with Link and explains that it was Calamity Ganon that he saw at Hyrule Castle, and when he learns that Link wanted to leave the Plateau, he explains that it was isolated from the rest of Hyrule and the Paraglider is the only way for him to properly leave the area. He does not give up his Paraglider easily and instead tasks Link to visit all four shrines for the Spirit Orbs there in the Plateau in exchange for his own possession.

Link is unaware of Rhoam's actual intentions were, as he tended to appear at the spots before Link could. He seems to leave items and weapons laying around on purpose in order to test Link's resourcefulness that would come in handy in his upcoming journey.

After Link collects the fourth Spirit Orb at a shrine, the king praises him before vanishing in front of Link, astonishing the warrior. When he meets Rhoam at the Temple of Time, he reveals himself as the king of Hyrule, and recounts of the events of the terrible tragedy that caused Hyrule to fall to its current state up to including the deaths of the Champions in Ganon's rampage.

He instructs Link to visit Impa at Kakariko Village, and warns him that Princess Zelda's seal will soon be weakened and Ganon will be unstoppable. Seeing that his mission is finally fulfilled, he gives Link the Paraglider as a gift before vanishing away and is not encountered again for the remainder of the game.

After Link and the freed Princess Zelda seal Dark Beast Ganon away indefinitely, King Rhoam and the Champions see Link and Zelda off before they take their leave for the afterlife, leaving them and everyone else to restore Hyrule to its former glory.

King Rhoam is first seen as he sends his army, including Link as a Hyrulean Knight, to fight off a force of Ganon's monsters attacking Hyrule Field. After the battle ends in victory for the Hyrulean Forces, Rhoam congratulates his soldiers for their efforts before dismissing them to return to their homes or barracks. Later, after Zelda, Impa, and Link present Terrako to King Rhoam, though he reminds Zelda of her duties to awaken her dormant powers granted to her by Hylia and the Triforce, he nevertheless allows her to take Terrako, with Link and Impa escorting her, to the Royal Science Academy to be looked over by Robbie and Purah. When Zelda returns with the knowledge of the Great Calamity that Robbie and Purah extracted from Terrako's memory banks, Rhoam permits her to head across Hyrule to recruit the four Champions to pilot the Divine Beasts against Calamity Ganon while also unearthing the Guardians to assist as well.

After Zelda returns with the Champions, though Rhoam shows no happiness over Zelda's efforts because she still has not awoken her powers yet, nevertheless, he allows her to go with the Champions into Korok Forest to recover the Master Sword. When they return later with Link having claimed the Master Sword as his own, marking him as the knight who will assist Zelda against the Calamity, Rhoam officially dubs Link and the other Champions as Champions of Hyrule, granting them their Champion attire, but still shows some annoyance over Zelda focusing on the Divine Beasts and Sheikah technology over awakening her powers. When he confronts her later, getting a closer look and apparently recognizing Terrako, when Zelda gives him a Sheikah disc she had been studying, having first done so before her mother, the Queen of Hyrule, passed away, Rhoam softens and agrees to allow Zelda to continue her studies, but not forget what her main objective is with awakening her powers from Hylia and the Triforce.

Later, Impa reports in to Rhoam that further analysis of Terrako has revealed that Calamity Ganon will awaken from his slumber on Zelda's 17th birthday, when she will be able to climb Mount Lanayru to train at the Spring of Wisdom. With time short as Zelda's birthday is in a couple of days, Rhoam sends her to the Spring of Courage while he has Castle Town and surrounding communities evacuated to avoid collateral damage when the Calamity arrives, transferring the evacuated soldiers to reinforce the garrisons at Akkala Citadel and Fort Hateno as if those strongholds fall, Hyrule is done for.

However, as Zelda prepares to leave for Mount Lanayru with Impa and Link, Terrako, having fled the Royal Science Academy after Purah and Robbie were ambushed by Yiga Clan spies who had infiltrated their Sheikah researchers' ranks, hands her the Sheikah Slate, but as Zelda is about to look over what new information was gathered, Calamity Ganon finally awakens and engulfs Hyrule Castle. As the Guardians begin to be corrupted and turn against those they were sworn to protect, one Guardian Stalker manages to corner Zelda and Link, but as it is about to blast them with its eye laser, King Rhoam strikes at the Guardian from behind, stunning it as his Royal Guard arrive to assist him. Link prepares to assist the king, but Rhoam tells him to take Zelda and flee as his duty is to protect Zelda, not Rhoam. Understanding his duty, Link withdraws with Zelda as Rhoam and his Royal Guard are surrounded by two more Guardians alongside the stunned one as it recovers and turns to glare angrily at the king.

As Link and Zelda flee, the Guardians are heard acquiring target lock and fire, leaving Zelda to fear her father and his Royal Guard have been slain by them. When Impa later shows her the Sheikah Slate with images of the Divine Beasts also under Ganon's control, Zelda collapses in grief and guilt, fearing that her failure to awaken her divine powers have cost Hyrule everything: Her father, the Champions, and more, and it's all her fault.

However, after Terrako summons reinforcements from the future in the Breath of the Wild timeline to save the Champions and Divine Beasts from the Blight Ganons, and Master Kohga and his Yiga defect to Zelda's side to avenge their fallen brethren used to revive the Blight Ganons later by Astor, the dark seer in service to the Calamity, a defense of the Great Plateau results in where when Zelda enters the Temple of Time, she finds King Rhoam, still very much alive. Rhoam reveals that when the Guardian Stalkers prepared to fire on him and his Royal Guard, the disc Zelda gave him earlier reacted, and just as the corrupted automatons fired, the disc projected a Guardian Shield, reflecting the lasers back at their origin points and stunning the Guardians.

Using the moment to his advantage, Rhoam orders his Royal Guard to retreat back to the Temple of Time, abandoning Hyrule Castle for the time being so that they can regroup and plan to take the castle back later. Reunited with his daughter, Rhoam apologizes for having put so much pressure on Zelda, with the heartwarming moment being so beautiful that not even Master Kohga and his Yiga can resist crying in joy at seeing it. With father and daughter having made amends, Rhoam orders everyone there to regroup in preparation to take back Hyrule Castle. Once in Hyrule Field, Rhoam and Zelda wait as Purah uses the Sheikah Tower to summon the various races from across Hyrule to unite together into one unified coalition to take back their land from Calamity Ganon. With the support of the Gerudo, Gorons, Rito, Zoras, Master Kohga and his Yiga having rejoined Impa and the Sheikah, and the Divine Beasts, piloted by the Champions of the present and future, Rhoam passes command to Zelda with his blessing, and Zelda rallies everyone to launch the siege to take back Hyrule Castle.

Fighting past the strongest of Ganon's monsters and surviving corrupted Guardians, even when he revives them via a Blood Moon, the alliance is soon confronted by Astor and Harbinger Ganon, the Terrako of that timeline corrupted by Malice that followed the future Terrako into the past. After besting the both of them, Astor loses it completely, and orders Calamity Ganon to devour the heroes, but having tolerated Astor's failures for the last time, Ganon instead has Astor consumed to transform Harbinger Ganon into a perfected body for Calamity Ganon itself. In the process, Terrako is corrupted by Malice and Link and Zelda are forced to fight it, critically damaging it. As Zelda weeps, she remembers when she first completed Terrako, showed it to her mom, Terrako comforted her after the Queen passed away, and when Rhoam confiscated Terrako, despite Zelda's pleas not to, only for Rhoam to apologize for doing so. Filled with a burning passion of hatred and anger towards Calamity Ganon, Zelda declares his threat ends here and now.

Confronting Calamity Ganon, the heroes find that he is invulnerable to all their attacks until Terrako, with its last ounces of energy, kamikazes Calamity Ganon in a heroic sacrifice, breaking his defenses. With Ganon vulnerable, Link delivers the finisher with the Master Sword, cleaving Ganon in half, before Zelda uses her awoken power from Hylia and the Triforce to seal Ganon away for good. With Ganon gone, Hyrule survives the Great Calamity, and with King Rhoam and the Champions still alive, Hyrule begins the long process of rebuilding from the war. 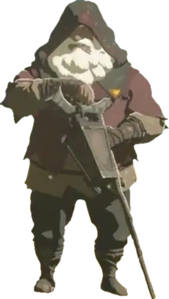 Retrieved from "https://hero.fandom.com/wiki/King_Rhoam?oldid=2241516"
Community content is available under CC-BY-SA unless otherwise noted.