Nanaue, also known as King Shark, is a major character in the 2021 comic book film The Suicide Squad. He is a metahuman who is supposedly a descendant of a shark god, and has a uncontrollable taste for human flesh. After being sentenced to Belle Reve, he was recruited into Task Force X by Amanda Waller to destroy Jotunheim and Project Starfish.

He was voiced by Sylvester Stallone (who also played Rocky Balboa in the Rocky and Creed series, John Rambo in the Rambo films, Gabe Walker in Cliffhanger, Marion Cobretti in Cobra, Joey Bomowski in Stop! Or My Mom Will Shoot!, Jake Malloy in D-Tox, Barney Ross in The Expendables films and voiced Weaver in Antz), and portrayed by Steve Agee (who also plays John Economos in the same film and the upcoming HBO series Peacemaker) via motion capture.

Nanaue's origins are currently unknown, but according to Amanda Waller, some believe that he is a descendant of a shark god due to his shark physiology. Despite being gifted with superhuman abilities, Nanaue suffered a taste of human flesh, often resulting in him eating people mindlessly. Due to his appearance and possibly his uncontrollable hunger for human flesh, Nanaue didn't have any friends, causing him to become a loner and eventually turned to a life of crime. He was later apprehended and sentenced to Belle Reve, a federal penitentiary in Louisiana that holds powerful criminals.

In 2021, ARGUS director Amanda Waller decides to reform Task Force X to destroy Jotunheim, a laboratory and prison to prevent evidence of America's involvement with Project Starfish being exposed. King Shark was placed on the second team led by Bloodsport, who were assigned to complete the mission alongside the first team under the command of Rick Flag. Upon landing on Corto Maltese, Waller informed the team that Flag's squad were killed, and that they had to complete the mission. While the rest of his teammates were sleeping, King Shark attempted to Ratcatcher, but was stopped by Bloodsport who shot at him repeatedly. Nanaue made friends with Ratcatcher afterwards, as she decided to befriend him once he revealed that he wouldn't eat those he called friend. The following morning, the team were tasked by Waller to divert their objective to rescue Flag.

Believing Flag to be captured by Maltese soldiers, King Shark assisted Bloodsport and Peacemaker in killing them finding Flag safe, having been rescued by resistance leader Sol Soria. Despite losing her men, Soria agrees to help the squad since she wants to stop Silvio Luna and Mateo Suarez from oppressing the island. Flag decides to divert their mission to rescue Harley, who had survived the beach massacre and was being interrogated by Luna. Once she regrouped with the team, they went on to capture the Thinker so he could help them find Jotunheim. The squad decided to plant explosives, and King Shark assisted Peacemaker in doing so while also showing the latter a figurine of himself made from the explosives. After completing his objective, King Shark wondered off after Peacemaker disappeared, and he came across an aquarium that was full of Clyrax.

While trying to make friends with the Clyrax's, Polka-Dot Man accidently set off the explosives, causing the aquarium to break and the Clyrax's attacking King Shark. He survived the incident, and reunited with his teammates to see Starro attacking the city while taking control of citizens. Despite being tasked by Waller to leave the city, Bloodsport refused and ordered King Shark to eat Starro, but the creature threw Nanaue towards a building. After Starro was defeated by his teammates, King Shark reunited with them and was given a hug by Ratcatcher. Once the mission was completed, Bloodsport bribed Waller into giving him and his teammates freedom since he had the files on America's involvement with Project Starfish. 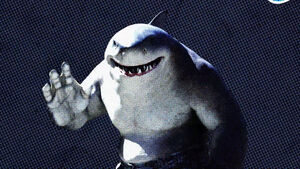