To become a superhero himself (both succeeded).

Fredrick Christopher "Freddy" Freeman is the deuteragonist of Shazam! the seventh installment of the DC Extended Universe. He is the foster brother, best friend, and trainer of Billy Batson. He becomes the superhero King Shazam to aid Billy and his foster family in fight with Dr. Sivana and the Seven Deadly Enemies of Man.

As Freddy Freeman, he is portrayed by Jack Dylan Grazer, who also portrays young Eddie Kaspbrak in the It 2017-2019 films.

As King Shazam, he is portrayed by Adam Brody.

Freddy appears to be Billy’s foster brother, then his best friend. They spend time together at school, and they talk about superheroes. One day Billy tries to escape from his new family and gets turned into a superhero. Shazam asks him what to do, next day Freddy trains Shazam. Billy is first introduced to Freddy when he is brought to Vasquez household, when Rosa introduces them to each other, Freddy then shows Billy his collection of superhero memorabilia, but Billy does not care. After Freddy does the grace with his family during dinner, but Billy does not join in.

The next day, at school, Freddy sits with Billy at lunch despite the latter does not want him to and asks which superpower would he prefer to, flight or invisibility, but Billy is not interested in the question. Freddy accuses Billy of stealing a bullet that shot at Superman, but Billy denies it. After school ends, two bullies, Brett and Burke Breyer run over hit Freddy with their which left a scratch on the paint. They blame him for the scratch, and beat up Freddy, but then Billy comes to his aid and stand to the Breyers, hitting with Freddy's crutch before they start chasing him, and then Freddy's other foster siblings Mary, Pedro, Eugene, and Darla, help Freddy up.

Teaching Billy how to be a superhero

Later that night everyone is trying find Billy, who disappeared after the fight with the Breyer brothers, while Freddy is washing the dishes when a man dressed like a superhero comes to the window claiming to be Billy, who was given the powers of the Wizard Shazam after the fight with the Breyer brothers, and tells Freddy about the question he ask him earlier at lunch that day and to meet him outside later. Victor and Rosa and come into the kitchen after they heard Freddy scream when came to the window, and tells them feels bad because blames himself for Billy's disappearance, then Victor hugs him.

After Freddy goes outside to meet Billy, but Freddy believes he is a supervillain using telepathic abilities and threatens to call 911 if he doesn't prove it, then Billy tries to prove it by conforming that he did steal the Superman bullet and showing it to Freddy but Billy, having not grow use to his adult hands, loses the bullet down a sewer drain.

Freddy asks Billy what his powers are, and Billy tells him he doesn't know, the two then go to test what powers Billy has first, discovering his power to generate and project electricity, and later discover his super-speed and super-strength after they try to stop a mugger, the woman terrified of Billy gives him $73. Then they decide to buy beer from a convenient store, when a robbery occurs, Billy defeats the robbers, discovering he has invulnerabilities in the process. After Billy defeats the robbers, he and Freddy head up the Rocky Steps to look at the view. Then Freddy decides that there aren't any criminals left at the time of the night now, and convinces Billy it's time to head home. After they almost get caught by Victor and Rosa, they go into Darla's room and wake her up. Then Billy uses his superspeed to cover Darla's mouth, but Freddy tells him not to do that as it seems like he's going to kidnap her and make Darla more scared. After Billy takes his hand off Darla's mouth and tries to explain to her what happened to him, he turns back to normal after saying Shazam's name, much to Freddy's amazement. Then he and Billy explain to Darla why she can't tell anyone about what she saw, despite Darla not being very good at keeping secrets, as Freddy conforms it, she agrees after Billy tells her it's something a good sister would do, then Billy and Freddy head to bed.

At school the next day, Billy gets revenge on the Breyer brothers for they did to Freddy, by damaging their truck, then Freddy mockingly apologizing for what happened to their truck. After Billy has Freddy sneak into the factually lounge to get a coat, then they get out of school by having Billy appearing in his superhero avatar and wearing the coat pretending to be their dad and fool a security guard. Then they begin making videos of Billy testing out his powers and posting them online turning Billy into an internet phenomenon, even attempt to buy a place they can use as their lair.

However, one day when the Breyer brothers attempt to bully Freddy again, he tries to stop by saying his best friends Billy's superhero alter ego, but the Breyers are skeptic, and he then says that he will be in cafeteria to have lunch with tomorrow. Later that night the family discusses their thoughts on the superhero, Pedro thinks his costume is stupid and Eugene questions if what he doing is really heroic like charging cellphone, then Billy and Freddy get into an argument about the former is doing, which confuses the rest of the family as Darla does her best not reveal Billy's secret. The next day at school, Billy decides skip school and go around Philadelphia as his superhero alter ego, despite Freddy trying to convince not. During lunch period when Billy does not show up, the other students think Freddy is a liar, and he is made a laughingstock, then the Breyers give him a wedgie.

After school, Freddy confronts Billy while he is using electric powers to entertain people and make money, they get into another argument which leads to Billy accidentally electrocuting a bus. After Billy barely saves the bus, Freddy tells off Billy for abusing his powers, and becoming just like the Breyers.

However, the moment Freddy leaves, Billy is confronted by Dr. Thaddeus Sivana, a man who was offered the Wizard's powers as a child but was rejected for being tempted by the demons known as the Seven Deadly Sins, now empowered by the Sins and wanting to gain Billy's powers, and this leads to being beaten Billy by Sivana. After Billy escapes from Sivana at a mall by transforming by back to his normal self, Freddy looks for him and is spotted by Sivana, who saw the news coverage of him arguing with Billy in his superhero form, and Sivana demands that he to take him to Billy. Freddy then brings Sivana to the house, but Billy is not there as he is going to see his mother after Mary, Pedro, and Eugene, who also saw the news coverage of the two arguing and figured out Billy is the superhero, told where she is, then they are all taken hostage by Sivana.

After Billy learns that his mother deliberately abandoned him as a child, Sivana calls him on Freddy's phone demanding to return the house. After Billy returns to the house to save Freddy and the rest of his siblings, he agrees to give Sivana his powers to protect them from Sivana. Then Freddy and the rest of his siblings follow Sivana and Billy to the Rock of Eternity to help Billy.

After evading Sivana and returning to Philadelphia with Sivana following them, they end up at a Christmas Village carnival and Sivana threatens all the people there. While Billy tries to fight Sivana, Freddy and his siblings try help by getting Sivana to release all the sins, after discovering he needs them in his body to keep his powers, but Freddy and his siblings, except Mary at first, are captured by the Sins. After Sivana and the sins capture Freddy, Eugene, Pedro, Darla, and Mary, Sivana tries to make Billy gave up his powers threatening to kill Darla. When it appears Billy is going to gave Sivana his powers, despite Freddy and the rest of their other siblings telling him not to do, he remembers how the Wizard told to him find others to share his powers with, he gets hold of the Wizard's staff and tells his siblings to grab, and say the wizard's name. After Freddy and his siblings say Shazam's name, they are all transformed into superhero versions of themselves, with Freddy becoming the superhero King Shazam.

Freddy and his siblings then work together to fight Sivana and the Sins and save the people at the carnival. Freddy fights against the sin Pride, which he considers as important occasion for him as Pride the very first villain he has ever fought. When the Sin Wrath makes Pedro drop a Ferris wheel, which was damaged by Sivana's attack, he is holding up with his super strength, Freddy saves the last two people on the Ferris wheel, the Breyer brothers, before it falls over while the two wedgies as revenge. After Billy tricks the final sin, Envy, into leaving Sivana's body, and removes the Eye of Sin from Sivana, the sins are imprisoned again, Freddy, Billy and the rest of their siblings are hailed as heroes by the people at carnival. After they return the Eye of Sin to Rock of Eternity, which they make their new lair, Freddy and his siblings enjoy Christmas dinner, and do the grace which this time Billy joins in, having finally accepted them as his family.

Some time later during lunch period at school, Freddy is mocked by everyone in cafeteria, including the Breyers, and sits alone but his siblings sit with him to have lunch, despite having separate lunch periods. After Freddy tries to get Darla to give an explanation, she does not reveal anything to him, Billy then shows up in cafeteria in his superhero form, much to the amazement of everyone in the cafeteria including the Breyers, telling everyone that he and Freddy are best friends and Freddy taught everything he knows about being a superhero, then he reveals invited Superman to have with lunch them as well, much to Freddy's surprise. 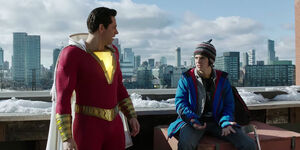 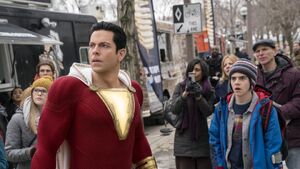 Freddy as King Shazam and the Shazam Family. 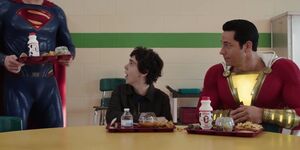 Freddy and Shazam with Superman.