King of the Crystal Empire (formerly)

Keep the Crystal Empire under his control (failed).

King Sombra is one of the main antagonists in My Little Pony: Friendship is Magic comic series. He first appeared as the secondary antagonist of "Siege of the Crystal Empire" arc.

This comic version of Sombra is more a fallen hero because before he became corrupted he was good, as a foal he was friend with a filly named Radiant Hope, he was really caring for her and she does the same. When he go with her in The Crystal Empire, they both approached the crystal heart, Radiant see she was going to be a Princess, but Sombra saw something horrible that will happen to him.

But when Radiant Hope reappeared she decided to be on his side has his empress, but it was only to see how he will rule, she see that he became a horrific monster he tried to tell her since that vision he refuse to give up his dream.

But Radiant Hope make him see that she gave up her princess dream to be normal, because she was still loved him, when they go see Rabia ,  When Radiant Hope then take the crystal heart from her bag Sombra  look at his reflection Rabia  urge him to smash it but instead he unleash his power, he thank Radian hope to make him see the light, but before he completely disappear, Radian Hope and the other Pony save him, and he became good again, after said goodbye to the ponys him and Radiant Hope race off in the forest.

In a alternate reality Sombra has a counterpart of the same name who he seemed to be a good king just before he was corrupted by Rabia, he was friendly and loving by all of his people and Princess Celestia was also in love with him, but he sacrificed himself and got brainwashed, he becoming evil and corrupted, keeping the balance of being "normal" Sombra's opposite.

King Sombra serves as the secondary antagonist in IDW's 13th story arc and the main protagonist in Fiendship Is Magic Issue #1. 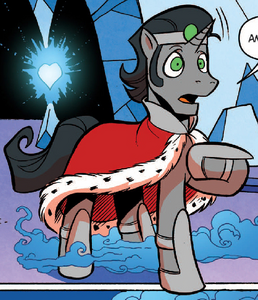 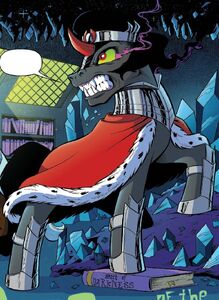 Sombra as the tyrant 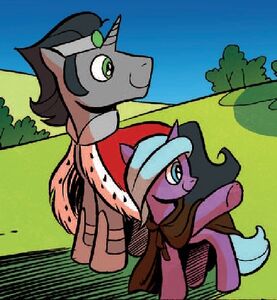 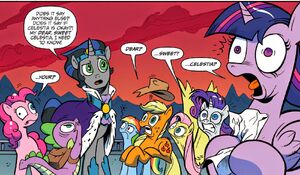