He was from the planet called, "Planet Kinniku"

The story involves Kinnikuman (real name Suguru Kinniku), a clumsy, foolish superhero who discovers that he is the missing prince of the planet Kinniku (known for producing the greatest superheroes in the universe). Since he is a clumsy fool, however, he must prove himself worthy of the throne. To do so he enters wrestling competitions and battles evil Chojin, culminating in a tournament between Kinnikuman and five pretenders to the throne: Kinnikuman Big Body, Soldier, Zebra, Mariposa and Super Phoenix. Many of Kinnikuman's allies begin as villains (Ramenman, Buffalo Man, Ashuraman and Warsman) or arrogant heroes (Terryman, Robin Mask and Rikishiman). The heroes and villains are collectively known as Chojin, which literally means "supermen".

In the beginning of the series, Suguru fights Kaijū by eating garlic and growing 30 meters tall. Despite his great strength and skill, Suguru is quite clumsy by nature. This side of him causes most people to fear him more than the monsters he fights (due mostly to the possibility of him crashing into buildings while in his giant form). He is so clumsy that, at times, regular people are capable of besting him in fights. He has even said on one occasion that although Chojin's wounds heal much faster than human wounds, when he gets hurt it takes longer to heal than a human, probably as a result of how he takes his training and fitness much less seriously than most choujin. He is also very arrogant and believes himself to be more popular than he actually is. He gets daily reminders of the truth, however, when people run from his ugly face or his garlic breath.

Suguru's favorite food is gyūdon, and he will do almost anything if he is offered just one bowl. Though he mostly eats gyūdon, he also pigs out on a wide variety of other foods, and when he is not eating he is usually watching TV. He "trained" for the 21st Chōjin Olympics by eating chips and watching TV. He is stationed in Japan in Beverly Parkand lives there with Meat.

Suguru is also a bit lecherous and has been known to take part in matches he previously refused to simply because a pretty girl asked him to change his mind. Suguru flirts with every girl he sees, and has on numerous times tried to peep on his friends Mari Nikaido and Natsuko Shono. Unfortunately for him, no girls find him in the least bit appealing except for Bibimba.

However (and ironically), when Bibimba first shows up it is a one-sided love on her part and he finds her more annoying than cute. But by the time of the Seven Devil Chōjin Arc he seems to acknowledge her as his betrothed. During the Survivor Match for the Kinniku Throne Arc, he showed great concern for her when she threw herself from the stands and later admits that he believes they are bound by the red string of fate. Oddly, Bibinba is for the most part left out of the anime, and Mari, whom had always shown more interest in Meat, becomes his main love interest.

His personality is reflected in his voice in the anime, which deviates between high and screechy and low and serious.

In Kinnikuman Nisei, Suguru has lost his muscles and become skinny and flabby, but is still quite powerful. As he explains to a doubting Mantaro, while old age has robbed him of most of his physical prowess (thus making Suguru unable to perform many of his most famous moves) he's still able to employ grapples and leves, and his knowledge and coordination have been left unaffected. He has taken on a lot of the same characteristics his father had and is usually bickering with his son. Unlike with his father though, Suguru has a great deal of respect for Mantarō, and although Mantarō finds him lame they maintain a rather healthy father/son relationship. While Mayumi was mostly a comically uncaring father in the early chapters of the original manga and a strict father in the latter parts, Suguru, "a child at heart" (according to the American dub of the anime) tried to get in Mantaro's good graces by spoiling him and hiding from him every trace of his past as a champion, wishing to be no more than a mere father to him. Even when Mantaro eventually learned of his father's past, he still held to the memories of his goofy, caring, simpleminded father. 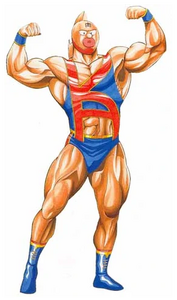 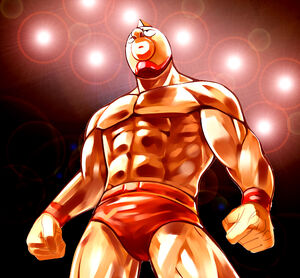 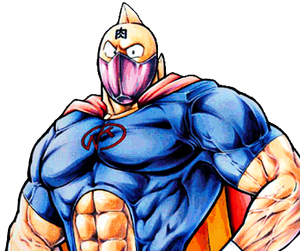 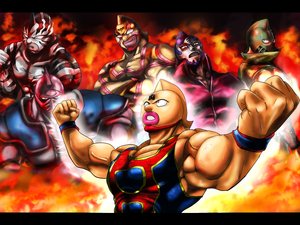 Kinnikuman and the fated princes. 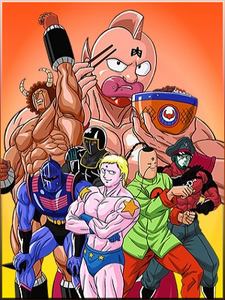 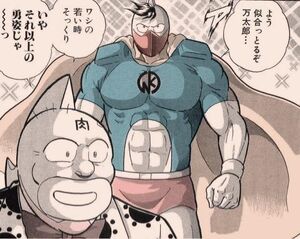 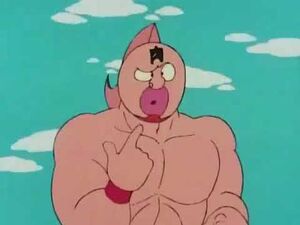 Retrieved from "https://hero.fandom.com/wiki/Kinnikuman?oldid=1857780"
Community content is available under CC-BY-SA unless otherwise noted.