Kira Watanabe-Finster is one of the main characters who first appeared in Rugrats in Paris: The Movie,as one of the tritagonists, alongside her daughter, Kimi.

Originally, Kira served as an assistant to Coco LaBouche, the evil woman in power in the theme park EuroReptar. Throughout the entire film, she was forced by Coco to do her bidding until she stood up to her in the end and saved Chaz.

She is Kimi's mother and Chuckie's stepmother. Married Chaz in Rugrats in Paris: The Movie. Operates the Java Lava Coffee House with her husband. She somewhat plays the straight woman to the rest of the adults' wackiness, but she enjoys showcasing and trying new things, as opposed to a lot of the rest of them. Kira is also Japanese and has similar qualities to Miss Honey from Matilda.

She is voiced by Julia Kato.

Kira standing up to Coco for deceiving Chaz 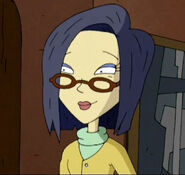 All Grown Up! Season 1 Kira

All Grown up Season 2-5 Kira

Kira Fighting With A Woman
Add a photo to this gallery

Retrieved from "https://hero.fandom.com/wiki/Kira_Finster?oldid=1718909"
Community content is available under CC-BY-SA unless otherwise noted.