To serve all the needs of the students in the Killing School Semester (formerly; possibly succeeded)
To make Tenko's lifestyle as a stereotypical celebrity of the highest possible quality as she can (succeeded or doesn't have as a goal depending on the player's choices)
To serve the needs of her country as de facto Prime Minister
To escape from the Academy of Gifted Juveniles
To survive and escape from her execution (all failed)

Kirumi Tojo is a student in Ultimate Academy for Gifted Juveniles and a participant of the Killing School Semester featured in Danganronpa V3: Killing Harmony. She is also an anti-hero and minor antagonist of the game.

Kirumi has made a name for herself, due to filling any request given to her perfectly. She takes her role as a maid seriously, and commits herself to it. This has earned her the title of Ultimate Maid (Super High School Level Maid in the original Japanese version).

After she was accepted into the 53rd Killing Game, Kirumi's memories and past were fabricated by Team Danganronpa as follows.

While working a part-time job as a maid, Kirumi was able to carry out any job and created a reputation for doing perfect work. She is popular among freshman and was even selected as a bodyguard for visiting heads of state. This was later revealed to be a mere rumor, as Kirumi explained that she was only employed as a maid. She also stated that she turned down the job to run a country.

Having performed many achievements and perfectly accomplishing every task given to her, and eventually gaining clients in both politics and finance, the government decided to request Kirumi's assistance. She worked as the shadow of the Prime Minister of Japan in rebuilding the country and improving the citizens' quality of life. Her strong motivation to support all citizens is what made her able to accomplish the government's request, to the point that Kirumi became de facto - Prime Minister herself. Nobody was aware that the Prime Minister's secretary was secretly running the country from behind the scenes.

After watching her motive video, Kirumi murders Ryoma Hoshi and attempts to escape her execution but fails.

Kirumi is a tall, thin young woman with pale, sandy blonde hair with a green tint and long bangs that obscure her left eye (but her left eye is occasionally drawn over it when she's expressing certain emotions). Her skin is fairly pale, and her eyes are a warm green. Her maid uniform consists of a long black apron dress in a pinafore style with a spiderweb motif, four white buttons along the middle of the torso of her dress, and the button of her previous high school's emblem on the left. A white dress is donned underneath her apron dress with a black collar, and a purple tie around her neck. The sleeves of her shirt have elegant frills at the end, which goes along with the bubble skirt appearance of her dress.

She wears a black headdress with black lace and frills attached to it, with four white pins on it, a common appearance that maids take up. She wears black, form-fitting gloves with silver rings attached to the back of her hands. Underneath her dress is a chic-combination of a petticoat with black lace and black tights, which she deems practical by not exposing her legs.[4] She also wears grey, high-laced pinwheel shoes, the laces white and wrapped around her ankles and settling into a neat bow at her feet.

In the Prologue, Kirumi wears a light blue sailor school uniform with a long pleated skirt, a red tie, red stripes on the collar, black tights with black inside shoes on top, and a brown headband that has a small bow on the right side of her hair.

Kirumi is a refined and mature woman who's described as "a professional who does a perfect job". She has a keen mind and she is talented in various ways, reportedly able to carry out any job, as well as capable of being independent and do things on her own. She is polite and formal, as well as quite serious, and very willing to use all of her power to cooperate with the other students. She is intelligent, observant, and level-headed. Her intelligence can be shown when she is speculating. Her speculations are provided with a fact and thus they are quite hard to refute—for example, when she accused Gonta as the culprit of Rantaro's murder case everyone believed in her well-thought, descriptive accusation until Kaede objected it with a solid evidence.

In Chapter 2, when the students discovered the half hallway of 2nd floor and the third floor, she felt that no one had set foot on the academy for a quite long time based on small details, and when she found out that the rooms of the deceased are locked by Monokuma, she thought that it was needed to be done in order to secure Rantaro's belongings, since Monokuma himself mentioned that he may have had a hunch about the truth behind the Killing Game.

As a maid, Kirumi's creed is "selfless devotion". Thus, she has a very strong sense of duty and a will to work for the sake of others even during the Killing Game. She voluntarily does house work such as cleaning and preparing meals for the students, even making sure each time that there's both Japanese and Western cuisine. Because of this, the other students seem to have strong trust in her, and she tends to wait outside the dormitory in case anyone has any requests for her. She is also shown to be very considerate and often asks the others if they are doing all right and gives them some advice. Her concern and kindness is often described as "motherlike", with Kokichi and Gonta even asking her to be "their mom". However, being a high school student, Kirumi completely denies such comparisons. Even in her last Free Time Event with Kaede, she stated that she dislikes being called the "mom" of the group, and in one of her Free Time Event with Shuichi, she said that being called a mom can be taken as an insult for some women, including her. 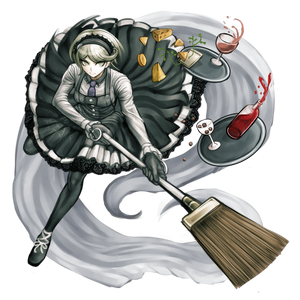 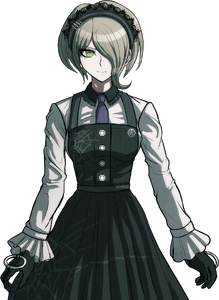 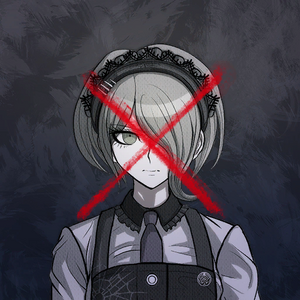