Leader of his pack
Member of Ōu Army

Kisaragi is one of supporting characters of Ginga: Nagareboshi Gin. He is an ambitious pack leader, and fights with Gin's pack before the two ally against Akakabuto. He and three other generals prowl Mutsu; Uzuki, Hazuki, and Minazuki rarely get any special attention.

He is voiced by Shō Hayami who also voices Frank Archer Fullmetal Alchemist and Sōsuke Aizen from Bleach.

He is a black-and-white Siberian Husky with blue eyes (sometimes orange eyes). He has distinctive stripes on his chest and cheeks.

Kisaragi is ambitious and slightly overly confident dog, seeing himself as a great leader. Kisaragi is quite cunning and smart in the battle. He tends to laugh at his enemies and openly calls Moss fat. He also shows cruelty as he laughs when watching his sons hurting the young Tesshin.

Kisaragi blinds Terry and then decides to leave him peace, though his brothers would like to kill him, showing the difference of their ways of thinking. Unlike his brothers, he respects Terry's bravery and buries him.

Kisaragi also loved his sons a lot and mourns deeply after finding out that they were killed by bears, swearing to avenge their deaths. He blames himself of Terry's death and feels guilt from killing such a great male.

In Ginga Densetsu Weed, Kisaragi is old and much friendlier and calmer dog. He has many sons and he loves them a lot and is very proud of them. He is deeply ashamed of his past self and still blames himself of Terry's death.

Kisaragi and his brothers capture Moss, and his part of the group in a volcano. They try to see if the heat can break their loyalty to their boss and make them join them. Ben tries to rescue Moss, but Terry seems to have betrayed Riki, and joined Kisaragi. Terry grips Ben by his neck and whispers that he is still loyal to the Boss, but he is forced to work under Kisaragi as he throws Ben into the volcano. Uzuki heard Terry, and as Terry tries to rescue Ben, Kisaragi challenges him.

In the fight, Kisaragi scratches out Terry's last eye. He then refuses to give up and throws himself against Kisaragi who easily jumps over him, making him rush straight into the claws of a bear.

As Kisaragi's and Ben's groups fight, the bears appear of the top of the volcano and throw Terry's dead body down it. Filled with anger, Ben's group fearlessly attacks the bears to avenge their fallen Platoon Leader. Kisaragi is amazed by their courage and joins the group. They defeat the bears but sadly his sons were killed in battle. He joins Ouu's forces to avenge the death of his children.

Kisaragi and his brothers survive the final battle against Akakabuto and return to Mutsu. He is fetched by Chuutora and John to help in conflict against Reima's wolves.

Moss leads their army into Reima's palace. The Husky brothers help Kurotora and defeat Raiga with the help of Moss and Hakurou.

After Reima explains the dogs that their true enemy is the evil wolf lord Gaia, the Mutsu Generals swim to Hokkaido to fight Gaia's army. After the battle, they return back to home.

He appears when Shigure comes to ask for help. Sadly he lets his sons go to war, after admitting that he too was once violent and fought for territory. He still feels guilty because of Terry's death. After the battle against Hougen ends, he is glad to have his sons back and healthy.

Later, he sends out his sons to help Hakuro when the dog, Victor, invades Hokkaido. Kisaragi first appears when Shigure helps his sons defeat a bear. As they kill it, Kisaragi appears and takes Shigure back to his cave to get some rest.

Outside, he rethinks the events of how Terry died and he shows regret. Izou goes outside and tells him he wants to go to Ohu to help fight off the invading army. Kisaragi sheds tears at the thought of his children in a war but is very proud of them nevertheless. He revelas to Izou that the other three leaders died long ago.

Kisaragi and his sons have been living in the cave of a bear they killed. While his sons have left to go to Ōu, Kisaragi hears someone. Believing it to be his son Shūsaku, he finds out it's a platoon of Kurohabaki Clan lead by Masashige.

Kisaragi tries to hop out of the cave to face the invaders, but fails due to his age. While he is hanging half way out of the cave, the Kurohabaki dogs surround him and rip big chunks out of his neck and throat, wounding him fatally.

Masashige then pushes Kisaragi back to the cave where the Husky quickly dies to blood loss. 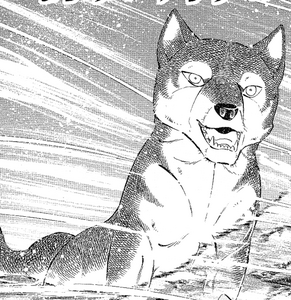 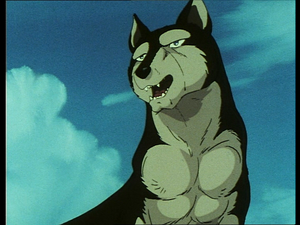 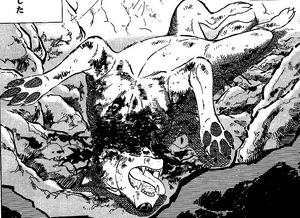 Kisaragi's Death
Add a photo to this gallery

Retrieved from "https://hero.fandom.com/wiki/Kisaragi_(Ginga_Nagareboshi_Gin)?oldid=1907943"
Community content is available under CC-BY-SA unless otherwise noted.