Anti-Heroic Mentor
Mastermind
Scapegoat
Inventor
Kisuke Urahara is a supporting protagonist in the anime/manga series Bleach. He is the former captain of the 12th Division, as well as the founder and 1st President of the Shinigami Research and Development Institute. He currently lives in the Human World after being exiled, where he owns a small convenience store, "Urahara Shop", which doubles in selling Shinigami items. The shop is maintained by Urahara himself, as well as his employees Tessai Tsukabishi, Jinta Hanakari, and Ururu Tsumugiya. He is also a longtime friend of Yoruichi Shihōin and a mentor of Ichigo Kurosaki.

Kisuke is a tall, lean-built man with light skin and gray eyes. His hair is messy and light-blond (almost pale), with strands framing the sides of the face and hanging between his eyes, and he has chin stubble. He wears a dark coat, which sports a white diamond pattern along its bottom half, with a dark green shirt and pants underneath. His coat's design is reminiscent of an inverted captain's haori (white with black diamonds). Urahara carries a fan, which he occasionally uses to hide his face. He usually wears traditional Japanese wooden sandals (geta) and a striped dark green and white bucket hat (which usually shadows his eyes), which has earned him the nickname "sandal-hat" (ゲタ帽子, geta-bōshi; "Mr. Hat-and-Clogs" in the English dub).

During his earlier years in Soul Society, he had a clean-shaved face and wore the standard Shinigami uniform. In his more casual events, he usually wore his geta. He later wore a long-sleeved captain's haori after his promotion to the rank of captain.

Though usually a laid-back, optimistic, jovial, pleasant and eccentric man, Urahara shows a deceptively cunning and serious side when the situation warrants it. He commonly uses idle conversation and outward concern to distract his opponents. Despite his care-free attitude, he always speaks politely, but is sometimes sarcastic. Yoruichi Shihōin notes he tends to go over the top with whatever he becomes passionate about. He has described himself as a "mere honest, handsome, perverted businessman."

Approximately 110 years ago, Urahara's personality was slightly opposite of what it is in the present. During his earlier years as a captain, he was viewed as a nervous, flustered, and quiet person. Somewhat unsure of himself, he lacked confidence in his ability to be a good leader. In addition, he was occasionally confused with how to deal with his division. Despite being uncomfortable in his role, he seemed relatively at ease in his previous position at the 2nd Division Detention Unit. However, he eventually hardened his resolve to take on his role as captain by becoming more serious and determined.

Urahara can usually be found near the scene of an important event, but he rarely intervenes in situations, preferring to stay on the sidelines. He often knows more information than he lets on, and despite being a major player in the situation, he acts only as a catalyst, having others do the work for him. Urahara is often manipulative, tricking people into doing what he wants them to. He also likes building large secret underground training spaces.

Kisuke is a pragmatic combatant, believing that using any means necessary in a life-and-death battle is essential in victory and survival, such as forming an alliance with Grimmjow Jaegerjaquez beforehand to defeat Askin Nakk Le Vaar via a sneak attack from behind.

Kisuke grew up in the Shihōin estate with his best friends Yoruichi Shihōin and Tessai Tsukabishi. When he was young, Kisuke often sparred with Yoruichi in a secret underground site under Sōgyoku Hill that they constructed. Eventually they both became shinigami and joined the 2nd Division, Kisuke taking the 3rd Seat position and Yoruichi becoming its captain.

While serving as the 3rd Seat of the 2nd Division, Kisuke also held the position of Corps Commander of the Detention Unit in the Covert Ops. After attending extensive examinations and reviews from other captains, he was promoted to captain of the 12th Division with the recommendation of Yoruichi, who was then also the Commander-in-Chief of the Covert Ops. Following his promotion ceremony, Kisuke quickly set up his laboratory his new quarters and recruited Mayuri Kurotsuchi, who was imprisoned for being a potential dangerous threat, to be his assistant. Upon doing so he founded what he called the Research and Development Institute in which he could freely perform experiments and invent new things. Not long after, news was circulating in Soul Society of people who had mysteriously vanished while leaving the clothes they wore behind. The 9th Division captain and his vanguard was initially sent to scout the area where the disappearances occurred. Kisuke wanted to investigate the cause of the disappearances, so he dispatched his lieutenant Hiyori Sarugaki to recover samples of the victims clothes. Soon after, a report was sent to headquarters saying that the 9th Division captain, lieutenant, and vanguard was involved in an accident and all sustained serious injuries. Realizing that he sent Hiyori there earlier, Kisuke pleaded with the captain-commander to let him go. He was immediately denied, but after returning to his barracks he decided to go against orders. Before he left, Kisuke was confronted by Kidō Corps captain Tessai Tsukabishi, who was sent by the captain-commander to monitor him. Fortunately, Tessai offered his assistance, and they both set out to the area. Kisuke managed to make a timely arrival just as Sōsuke Aizen prepared to slay 5th Division captain Shinji Hirako, two other captains and lieutenants, and Hiyori who were sent earlier. Kisuke accused Aizen of attempting hollowification, to which Aizen admitted but Kisuke and Tessai failed to capture him and his accomplices. Kisuke and Tessai brought the victims to Kisuke's laboratory where he unveiled the Hōgyoku, his new invention that breaks down the boundary between shinigami and hollows. However, before he could treat the victims' condition, Kisuke was arrested and convicted on charges of assault, kidnapping, and performing illegal experiments on fellow shinigami. The Central 46 sentenced him to exile while the victims be treated as hollows and therefore executed. However, before officers could escort him away, Yoruichi rescued him and they fled. Taking the hollowified victims with him, Kisuke along with Tessai and Yoruichi escaped to the world of the living, never since returning to Soul Society. 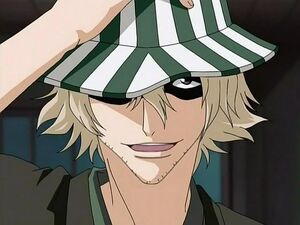 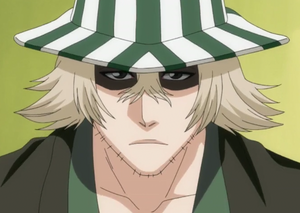 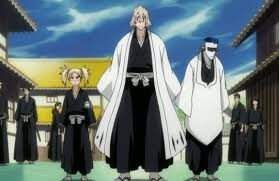 Urahara as a Captain 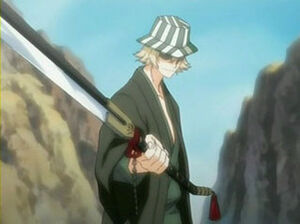 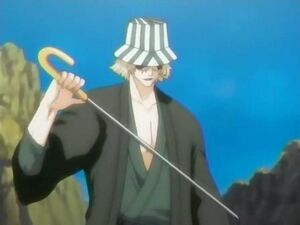 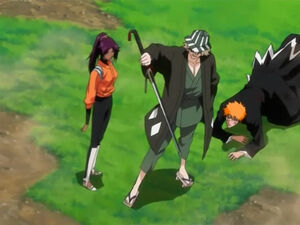 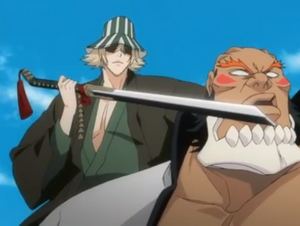 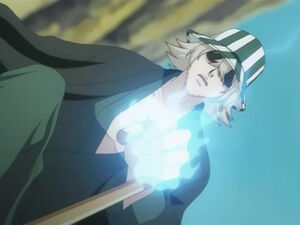 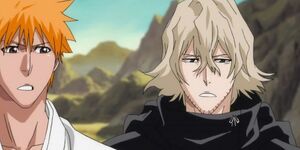 Retrieved from "https://hero.fandom.com/wiki/Kisuke_Urahara?oldid=2137451"
Community content is available under CC-BY-SA unless otherwise noted.