Note: This article is about the incarnation of Kitana from the films Mortal Kombat Legends. The mainstream version can be found here: Kitana (Mortal Kombat).

She is voiced by Grey DeLisle.

Kitana briefly appears in the film in a scene very similar to one in Mortal Kombat (2011) with her fighting Liu Kang before losing to him, but Liu Kang decides to spares her and deny there fight every happened.

After Shang Tsung's defeat and Quan Chi's death of hands by Scorpion, Shao Kahn laying his minions to have massed assault of the Earthrealm from Outworld. Kitana negotiated with Jade, Kintaro, Baraka, and Reiko at any time, how did she find that Johnny Cage was sitting sneaky on the tree. She used the Outworld monsters to destroying him through plotting. Johnny used his funny actions to kill them all, which leads Kitana and several Outworld warriors to be mighty shocked. So this on, fortunately, Liu Kang, Sonya Blade, Jax, Raiden, and the Earthrealm warriors then swift occurs and temporary repelling all the monsters with their imposing, making out of the decisions, having into protecting Johnny. Johnny worked with them to doing the battles, when Kitana fights Liu Kang again, learning they about that their feud.

Upon mentioned of that she lost to him in the past, Kitana was grudge to have regularly struggles, but Liu Kang don't makes her calm down. For the warriors are repeatedly strikes, Kitana is stopping by Liu Kang. Shao Kahn arriving to telling Raiden before gets revenge on the defeating of Shang Tsung. He taking him to discovered that the Elder Gods, which they about asking for the newest Mortal Kombat tournament, but did to much tumbled of their destiny worlds. Scorpion returning to Netherrealm, as he back from the dead, by with it Shang Tsung's island was destroyed. He facing Shinnok, the wicked Elder God who explaining him, about that the key, was he can be gained in the island had been tied up with his soul.

He asked him to entering the Earthrealm, opening the Temple of Elements, taking the artifact just likely to be defending. Virtually by the ways, Shinnok hiring the Lin Kuei clan, but not even odd out, thinks that Scorpion wants to getting the Kamidogu, which he able to tricked them about what his objective is, and by also who he is. As the Earthrealm warriors arriving in Outworld, Shao Kahn intending to greets them until that having to this meaning, outcome has promptly to joined on the Mortal Kombat tournament. At the Kahn's Koliseum, Shao Kahn is only to watched all the contestants into fights. Liu Kang fights with Jade, Johnny Cage is defeated by D'Vorah, Stryker defeating Baraka, Sonya loss her battling with Li Mei which so Jax murdering Kintaro. But Kung Lao, who also deal with Shao Kahn.

Shao Kahn and Shang Tsung were fatally from having successfully to eliminating Kung Lao and Stryker, Kitana will matched to Raiden. She originally to finishing for killed him but refused, which turned against Shao Kahn. However, Kitana later imprisoned by Shao Kahn from being betraying him, she sees Sonya fights with Shao Kahn, they considerably to hold the seriously protests. Sonya also being defeated by Shao Kahn, Liu Kang would coming to fights with him in order to avenging Kung Lao's death. At first, he is battle against Shang Tsung but his left arm cursing by him, much to his pains. Held the wrath, Liu Kang wins which must spared Shang Tsung's life. Ironically, Raiden is against Shao Kahn but he would dying in his hands.

Liu Kang tragically to mourned him remembered about the memories, so when he doomed afraid by that the actions was losses. In the final contesting, Liu Kang brutish to defeating Shao Kahn, which declares a winner by the Elder Gods, and Kitana then freeing from the prison. Upon her saved, Kitana noticed that Liu Kang as Raiden's chosen one who summoned by the Elder Gods, they hopes guiding him to dealing with Shinnok. Quickly, Shinnok mixing up with the One Being and the various realms to destroying everything. Kitana, Jax, Johnny, and Sonya are taking to the fusion, protecting earthrealmers with the help of Liu Kang, who empowering by the Elder Gods, which he is transforming into the giant dragon, and fought Shinnok.

After Shinnok's destruction, Liu Kang removing the fallen god of existence in dashing, separated all the realms into a normal state, inculding Edenia and others. By the times is returned to the Koliseum together with all the warriors, Liu Kang slowly to hugs with Kitana, but Sonya and Johnny are kissed each other. Its what happening that, Raiden had been revival. 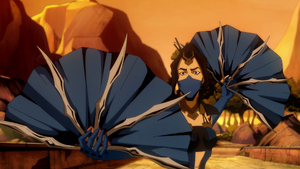