Kitty Softpaws is the deuteragonist of Puss in Boots and will return for Puss in Boots: The Last Wish. She is Puss' love interest and later, girlfriend.

She is voiced by Salma Hayek who also later voiced Teresa Del Taco in Sausage Party.

Cool and sleek, Kitty knows how to be alluring without ever being a damsel in distress. She can be impatient but never falters under pressure.

At first she cared only about the score but that all changes when she meets Puss. She is incredibly sneaky, suave, smart, charming and alluring to all, especially Puss.

In Humpty's scheme to use Puss he calls upon Kitty for her talent and manipulation. On the night Puss tries to rob Jack and Jill, Kitty (in a mask) seems to be after beans too. Things don't work well, they end up in a cat club. It's dance night so instead of just boxing the two cats duke it out with dance.

Puss is impressed by the stranger but after slipping milk on his boots he whacks her with a guitar. She takes off the masks and a stunned Puss releases she's female.

He's infatuated with this kindred spirit but is furious to see her in alliance with his ex-best Humpty. Kitty charms Puss but as he explains his history with Humpty she falls asleep.

Eventually Puss is convinced to help them steal the eggs, for the sake of his hometown and mother (human woman who loved him as a kitten).

During the adventure she and Puss bond. She explains the sad story of how her previous owners took her claws away; Puss comforts her with the knowledge that cat-people are crazy.

After stealing the golden egg laying chick, she and Puss enjoy a dance but Humpty warns Kitty not to get too close. The next morning Puss awakes with everyone gone, thinking Jack and Jill has kidnapped his friends.

Puss travels to his home town to find Humpty and the evil duo celebrating their swindle. Puss is thrown in jail for his old crime, Kitty watches sadly, realizing that she has fallen in love with Puss.

When Puss finds out from old Jack of the bean stock tale that the mother goose will destroy the town he breaks out of the cell. Kitty comes to help him, which makes him happy but doesn't make them even. Letting the police grab her, thinking her booted feet are his, she gets Puss out, this makes them even.

In the end the town loves Puss again but he's still wanted by the law. As he's leaving, Kitty is by his side matching his moves to her.

She promises they will meet again, sooner then he thinks, then she shows she's stolen his boots again and takes off. She later becomes Puss' girlfriend after she and Puss dance briefly then kiss. 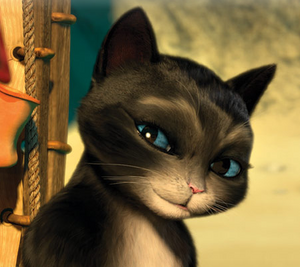 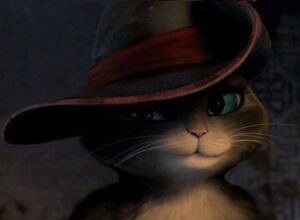 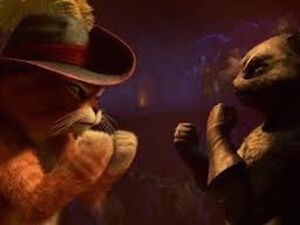 Puss and Kitty having a dance fight 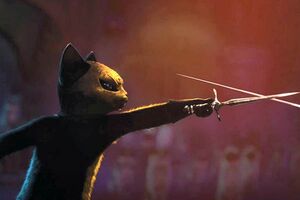 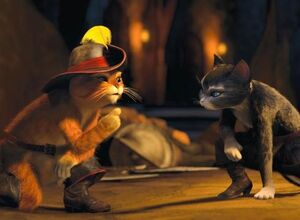 Kitty and puss working together

Kitty telling Puss about her tragic past 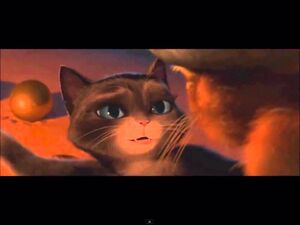 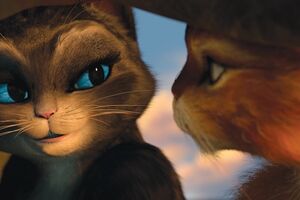 Kitty and Puss gazing each other

"I'm called Kitty Softpaws, because I'll steal you blind and you'll never notice that I'm there." 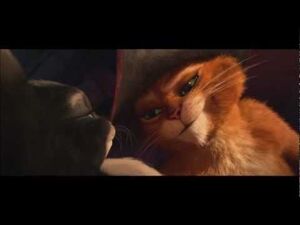 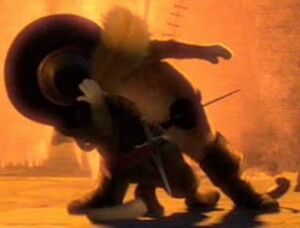