Part of resistance against Lord Palethorn

Save the city of London from the forces of evil (succeeded).

Princess Kiya, also simply known as Kiya, is the female deuteragonist of MediEvil 2. She is Sir Daniel Fortesque's love interest.

She was voiced by Melanie Hudson.

Kiya is a mummified Egyptian Princess who was supposed to be married to Rameses II. Unfortunately, he died before the marriage and she was chosen to accompany him in the afterlife.

Later on, in the 18th century, Sir Dan found her tomb inside the Old Museum in Kensington, and freed her. She fell in love with Sir Dan after he rescued her again from Jack the Ripper.

At the end of the game, after Lord Palethorn is defeated, she either goes back in time with Dan to Gallowmere and both are attacked by a Palethorn headed Zarok monster or they go back to Kiya’s tomb and buried along with Sir Dan by her side. 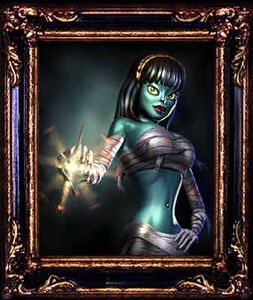 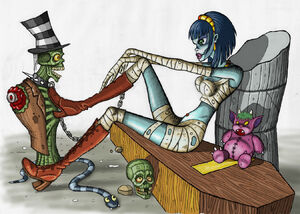