Kiyoshimo (清霜?, "Clear Frost") was a Yūgumo-class destroyer of the Imperial Japanese Navy. Battle of Leyte Gulf: Battle of Sibuyan Sea: Assigned to 1st Diversion Attack Force. During an air attack received one direct hit and five near misses. Assisted Battleship Musashi and rescued survivors after the crew of the Musashi abandoned ship. Repaired November 8–12 at Singapore.

On 26 December 1944, then with the San Jose bombardment force, Kiyoshimo was crippled by two direct bomb hits in attacks by U.S. Army bombers during approach to Mindoro, Philippines, then was finished off by a torpedo from U.S. PT-223, 145 miles (270 km) south of Manila (12°20′N 121°0′E); 82 were killed and 74 injured. Asashimo rescued 169 survivors, including ComDesDiv 2, Captain Shiraishi Nagayoshi, and Lieutenant Commander Kajimoto; U.S. PT boats rescued five others.

She wears the standard Yuugumo-class uniform which consists of a purple vest over a white dress shirt, a purple pleated skirt, a teal-blue bowtie and grey opaque pantyhose. She wears her rigging on her back as a backpack, it has yellow straps. Quadruple torpedo launchers are strapped to her thighs and she wields a standard 12.7cm gun with her right hand.

She has long, multicolored hair that is grey on the outside and blue on the inside. She has a complex hairstyle involving a hair bun turning into low twintails, a ahoge and a significantly longer bang to the right side of her face. She also has grey eyes.

An excitable girl, she wants to become a battleship due to her admiration of the battleship Musashi. So, it is not uncommon to draw her with Musashi's (or another battleship's) rigging, if only to collapse under the weight.

Somewhat resembles a certain old-fashioned hermit in looks but much more in temperament. 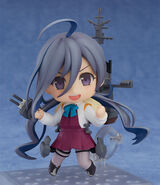 Add a photo to this gallery
Retrieved from "https://hero.fandom.com/wiki/Kiyoshimo?oldid=1776446"
Community content is available under CC-BY-SA unless otherwise noted.