A Series of Unfortunate Events

To find the perfect family for him and his siblings.

To solve the mystery of his parents' deaths.
To avoid Olaf.
To find the Quagmire triplets.

Klaus Baudelaire is the middle sibling of the Baudelaire Orphans and the deuteragonist in the thirteen book series A Series of Unfortunate Events. He is the brother of Violet and Sunny Baudelaire. He is an advent reader, and can dutifully remember what he's read at any moment.

Klaus is the middle and the brains of the Baudelaire orphans. He is twelve years old at the beginning of the series and turns thirteen in' middle of the books. By the end of the series, he is fourteen. Klaus is the "bookworm" of the family, and his love of books has often helped him save himself and his sisters from the villain himself Count Olaf. He tries to research their way out of the Marvelous Marriage in the 1st book. He helped prove that Stephano was really Count Olaf in disguise. He decoded Aunt Josephene's note leading he and his siblings to Curdled Cave. In The Ersatz Elevator, Klaus helped Violet and Sunny find out what V.F.D means. He also found his book knowledge important when he and his siblings were accused of killing "Count Olaf."

Klaus Baudelaire was born in the late fall to winter to Bertrand and Beatrice Baudelaire, being their second child after Violet and before his younger sister, Sunny. At a young age, Klaus became very found of reading, and spent a lot of time in his family's library.

In the books and Netflix series, Klaus is a 12 year old boy (later 13 in The Vile Village, and 14 in The End) who has dark brown hair and wears glasses. He is seen wearing a variety of different outfits throughout the series.

In the film, he has lighter hair and does not wear glasses.

Compared to his sister, Violet, he has a more pessimistic outlook on life. He is often very quick to get upset about his current situation. However, he is very loyal to his siblings and allies, and is also very intelligent and resourceful. 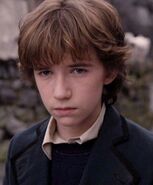 Retrieved from "https://hero.fandom.com/wiki/Klaus_Baudelaire?oldid=2219796"
Community content is available under CC-BY-SA unless otherwise noted.