The first order of Paladins was founded by Uther the LightBringer and Archbishop Alonsus Faol during the First War, the conflict between humans and orcs. Uther at the time became the leader along with other famous heroes who joined and under his leadership, lead them to battle where they played a role in the Second War. During that time, Uther and his forces with their holy power brought great victory and boosted the morale of their allies, to which Uther was recognized as the greatest of his time.

Their destruction was caused by the betrayal of Prince Arthas, who has become the first and greatest of the Lich King, Nerzhul's Death Knight has taken the blade; Frostmourne from Northrend and began a purge on his former comrades by first killing the founder and his beloved mentor, Uther the LightBringer.

After their crushing defeat and the Third War, the Knights were eventually reformed by another member of the Silver Hand, Tirion Fordring into the Argent Crusade with another organization, the Argent Dawn. In the aftermath of Arthas's death, the order began to recruit Dwarves to help replace the paladins lost during the Third war. Additionally, they now strive to eliminate all forms of corruption that had happened to Arthas to make sure their organization stays pure.

It is an organization of paladins who follow the three virtues. It is an order that gives paladin's a sense of righteousness and promotes a sense of teamwork that helps strengthens their resolve. The order itself is one of noble history and continues to use the holy light to protect their allies and smite their enemies. 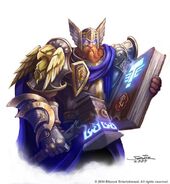 Knights of the Silver Hand 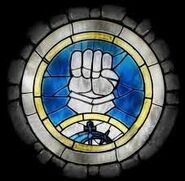 Add a photo to this gallery
Retrieved from "https://hero.fandom.com/wiki/Knights_of_the_Silver_Hand?oldid=1683318"
Community content is available under CC-BY-SA unless otherwise noted.