Knut is an ogre. He is more strong than smart. Also, he has very bad eyesight, so he needs to wear glasses all the time. Knut used to work for the Trix, even though no pets are allowed at Cloud Tower, but at the end of Season 1, Knut defected, and is now a janitor at Alfea.

Knut was a wicked ogre aggressive attitude but soon after, he became noble, fearful and good. At first, he was very loyal to the Trix and had been working for them under their orders but he was considered to be futile and foolish. He has endured the Trix's verbal abuses but he is always called to clean up their mess.

He fears nothing but the Trix, however when they took over the Magical Dimension, he realizes that they are mad and are dangerous and decides to flee with Pepe to Red Fountain. This reveals that Knut does indeed have a conscience and is brave for betraying the Trix and fight for good. Knut can be nervous like when he decides to go to Alfea and become its personal concierge and when he became Timmy for one of the Trix's plan.

In the third season, he falls for Stella while she was in her monster form. He shows his romantic side when he did, such as giving her flowers (though he did eat them) and trying to comfort her when she was distressed about her looks. He also has a goofy nature to his personality.

Knut attacked Stella in "An Unexpected Event" in order to steal her ring for his mistresses. When Bloomdiscovered them she tried to help Stella and used her first spells on him and his ghouls.

When Bloom returns to home with Stella, explaining the situation to her parents, Knut returns to the Trix. He reports of his progress that ended in failure. Though his mistresses were furious at his failure, he redeemed himself by telling them his new plan: using a hunter troll to hunt them down.

He returns to Gardenia with his troll and ghouls, trashing Bloom's house in another attempt to steal the ring but failed again thanks to the intervention of the Specialists. He escaped and his troll was captured.

In the second episode, he was in Magix City trying out new glasses when the Winx walked by. He runs out of the glasses store and alerts his mistresses. When Bloom was discovered eavesdropping on them and she was frozen, her friends came to rescue her and Knut was ordered by the Trix to attack them but failed once more.

In The Black-Mud Swamp, he alerts the Trix that his captured troll will be taken to police by Red Fountain's Specialists. The Trix, particularly Stormy, feared that the troll will snitch on them and proceed to eliminate it.

In Mission to Cloud Tower, Knut wakes up to a loud explosion caused by the Trix's attempt to take the ring's power but failed. He went back to sleep when Stormy casts a spell to make him forget about it. After that, he is ordered to clean up the mess and complains about it. He leaves the room when the Trix call him to meet up with them.

In later episodes, when the Trix finally gain the Dragon's Flame and assembled the Army of Darkness, he realizes how dangerous they are and fearing for his life and the good of the magical dimension he joins the other magical schools to defend it.

In "Rescue Misson," he meets Aisha as she walks out of the infirmary. She is scared by him.

In "The Mysterious Stone," he is the DJ at the party in Alfea.

In "Race Against Time," he gives Oleana ice cream in the hallway.

In this season, after the princess ball when Stella is turned into a monster by Chimera, he develops a crush on her monster form. And when she is talking about Brandon, he thought she meant himself and tried to "comfort" her. Although, Stella instead gave him lessons on how to be proper in order to court a lady. He tries doing proper postures, in a strange way, before falling onto the floor, Stella then says goodbye to him when Flora tells her they are ready to depart for their mission. 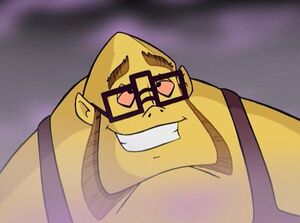 Add a photo to this gallery
Retrieved from "https://hero.fandom.com/wiki/Knut?oldid=2036271"
Community content is available under CC-BY-SA unless otherwise noted.